Facing criticism as COVID-19 continues to rise across Japan, Prime Minister Yoshihide Suga took another hit on Sunday after his Liberal Democratic Party lost the first national elections since he took office.

Given his precarious position, Suga is unlikely to call a general election any time soon and is in danger of losing power when his current term ends in September.

Tougher restrictions to curb infections took effect in Tokyo and the western prefectures of Osaka, Kyoto and Hyogo on Sunday after the government declared a state of emergency over the pandemic for the third time. 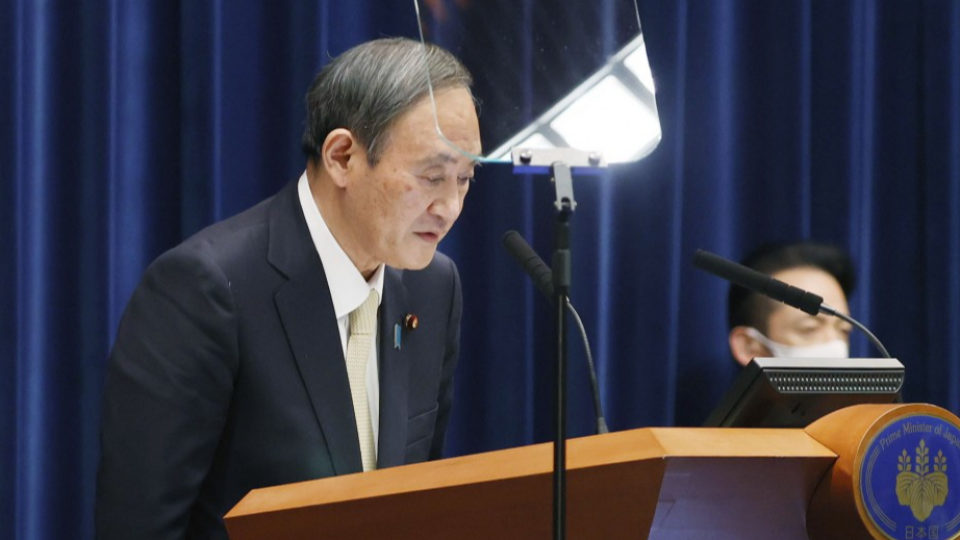 Japanese Prime Minister Yoshihide Suga bows during a press conference in Tokyo on April 23, 2021. He declared the same day a state of emergency in Tokyo and the western Japan prefectures of Osaka, Kyoto and Hyogo amid a resurgence in coronavirus infections. (Kyodo) ==Kyodo

Restaurants are closing by 8 p.m. and banned from serving alcohol, while department stores and movie theaters are being asked to shut down. Sports events are to be held without fans.

Suga had vowed to take steps to avoid another state of emergency, given the potentially devastating impact on businesses and jobs, but was forced to break that promise as highly contagious variants of the coronavirus spread like wildfire, overwhelming hospitals.

The prime minister has faced criticism over his response to the pandemic. His attempt at supporting the hospitality sector through travel subsidies was vilified as a conduit for infections, while only around 1 percent of Japan's population of 126 million has been vaccinated so far, according to government data.

The approval rating for Suga's Cabinet has taken a hit as a result. At 44 percent in a Kyodo News poll conducted this month, it rose slightly from the previous month but remains still far below the 66.4 percent immediately after he took office in September last year.

"He knows he has to do something but nothing seems to be going right," said Masahiro Iwasaki, a political science professor at Nihon University. "Right now he's weathering the storm."

The LDP's loss in elections Sunday for three parliamentary seats -- in Hokkaido for the House of Representatives and in Nagano and Hiroshima for the House of Councillors -- have further dented Suga's armor ahead of a general election to be held by this fall.

The Constitutional Democratic Party of Japan won the by-elections in Hokkaido, where the LDP opted not to field a candidate after a former farm minister resigned over a bribery scandal, and in Nagano, while the LDP lost in the Hiroshima re-run election to a candidate from a minor political group who was also backed by the CDPJ and other opposition parties.

The elections were closely watched as a bellwether for how the LDP under Suga would fare in the general election, which must be held before the current four-year terms of House of Representatives members ends in October.

The prime minister has the power to dissolve the lower house before then, one of the most powerful weapons in his political arsenal, and there had been speculation he could do so after returning from his trip to the United States earlier this month.

But Sunday's defeat effectively robs Suga of the chance to use that option in the near future.

Toru Yoshida, a professor of comparative politics at Doshisha University, said the most likely scenario now is waiting to call the general election until after the Tokyo Olympics, when the coronavirus situation will hopefully have improved.

But there will be growing anxiety among LDP lawmakers over being led by Suga, whose current term as party president ends in September.

Suga has no clear successor, although his vaccine czar Taro Kono and former Foreign Minister Fumio Kishida are among those who have said they want the top job.

Meanwhile, the opposition hopes to use Sunday's victories as a jumping off point for the general election.

"Voters passed a severe judgement on the Suga Cabinet," said CDPJ secretary general Tetsuro Fukuyama. "It is the result of a buildup of people's discontent over scandals involving politics and money and the novel coronavirus response."

But support for the CDPJ remains tepid amid memories of a disastrous turn at running the government by its predecessor, the Democratic Party of Japan, from 2009 to 2012. The party holds 113 seats in the House of Representatives, a distant second, to the LDP's 278.

"Their best chance is aiming to take power in a few years. Right now they have no chance," Iwasaki said.