At Tropicana Field, Arihara (1-1), who was 0-1 after two starts this season and pitching on four days rest, allowed two singles and a double in the longest outing of his short major league career that featured five strikeouts and no walks. 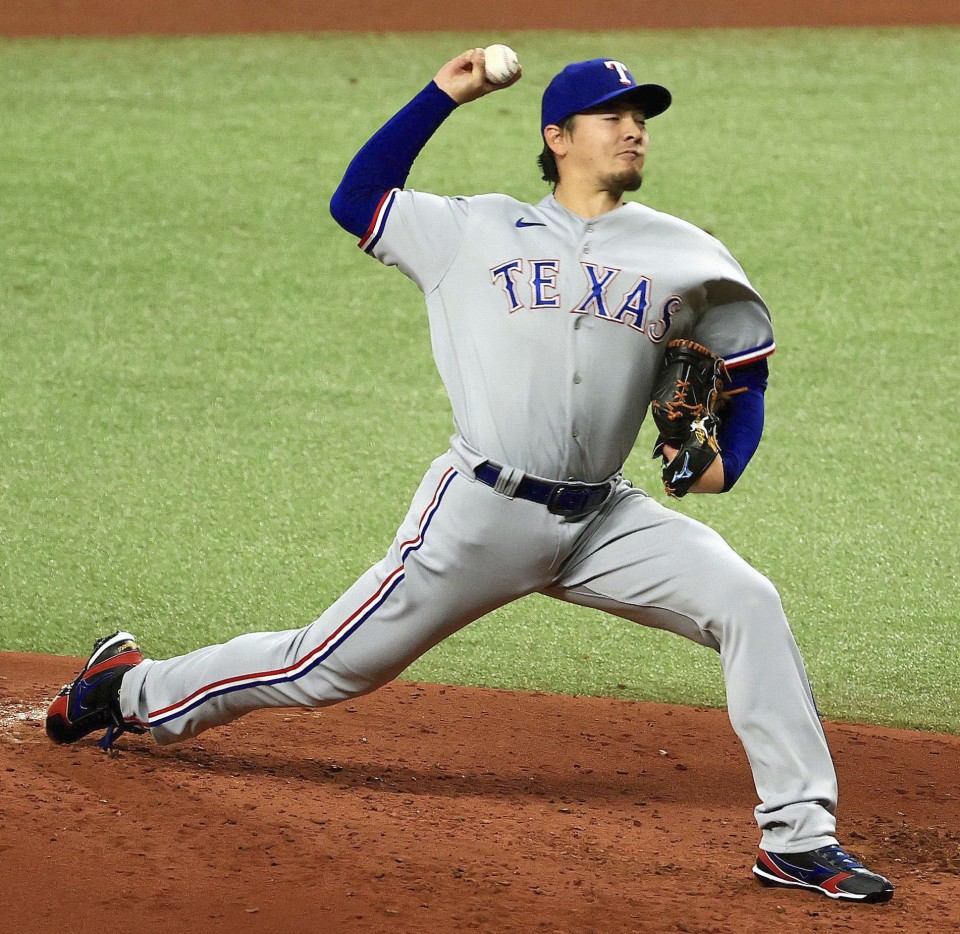 Kohei Arihara of the Texas Rangers pitches against the Tampa Bay Rays at Tropicana Field in St. Petersburg, Florida, on April 14, 2021. (Getty/Kyodo)

"I'm glad I contributed to the team's victory," said Arihara, the recipient of the Rangers' postgame cowboy hat, which is given to the team's player of the game.

Arihara escaped a two-on, no-out situation in the second inning with a flyout and two strikeouts, including one from fellow Japanese and Tampa Bay designated hitter Yoshitomo Tsutsugo, who finished the day 1-for-4.

Arihara got offensive support from Nate Lowe, who hit a solo homer off Josh Fleming (0-1) in the second, and from David Dahl and Adolis Garcia who each drove in two runs in the seventh to put the game away.

"I want to continue this kind of pitching," Arihara said.

The 28-year-old right-hander signed with the Rangers in December via the posting system after six seasons with the Nippon Ham Fighters of Japan's Pacific League.

At Target Field in Minneapolis, Minnesota, Kenta Maeda made a costly error and took the loss in the Minnesota Twins' 3-2 defeat to the Boston Red Sox in Game 1 of a doubleheader. The Twins later dropped the second seven-inning game 7-1.

Maeda (1-1) pitched 4-1/3 innings, allowing three runs -- two of them earned -- on seven hits with five strikeouts and a pair of walks.

The Twins' Opening Day starter struggled to keep the bases clear in the first two frames as he surrendered five hits and a walk, escaping the first inning without a blemish before yielding three runs in the second, partly due to his own throwing error.

At Kauffman Stadium in Kansas City, Missouri, Los Angeles Angels designated hitter Shohei Ohtani went 0-for-3 with a walk and two strikeouts after hitting safely in the last nine games he started in.

The Angels lost 6-1 to the Kansas City Royals.