Osaka Prefecture, which has been hit hardest by the recent resurgence, confirmed another 1,260 infections, a day before the start of the nation's Golden Week holidays.

Osaka Gov. Hirofumi Yoshimura told a press conference that the upcoming holiday period is expected to be "a make-or-break stage" in battling the resurgence, which has put a serious strain on the prefecture's medical system. 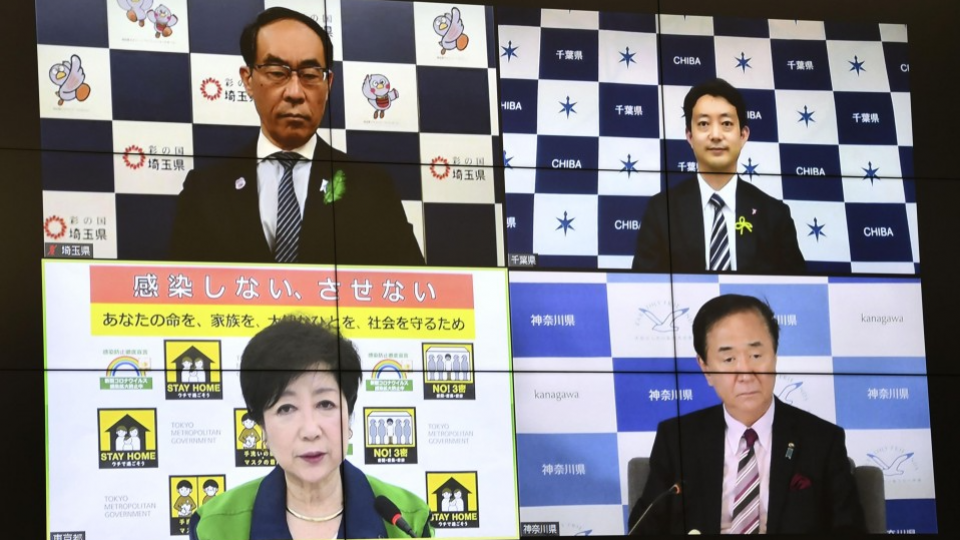 Fukuoka Prefecture reported 440 additional cases, the highest for the southwestern prefecture, eclipsing its previous single-day record of 411 logged on Jan. 16, when a second COVID-19 state of emergency was in place.

The nationwide tally for Wednesday was also the highest since Jan. 16, despite the country's third state of emergency imposed in Tokyo and three western prefectures including Osaka on Sunday.

The governors of Tokyo and three neighboring prefectures urged residents Wednesday to refrain from traveling to, from and within the metropolitan region ahead of the string of holidays.

In an online meeting, Tokyo Gov. Yuriko Koike and her counterparts from Chiba, Kanagawa and Saitama prefectures asked for people to stay at home and to stop drinking on streets and dining with non-family members.

The local government chiefs asked businesses to cut the number of commuters by 70 percent through the promotion of remote working.

Koike told the meeting that the Golden Week holiday period through early May is "a juncture that will decide whether we can stop the explosive spread of infections," with the Tokyo metropolitan government reporting another 925 infections, the highest figure since Jan. 28.

She said, "We can more effectively curb" the surge of infections now driven by the rapid spread of more contagious variants of the virus.

Meanwhile, Japan's health ministry said that 619 new cases of such variants had been reported in the week to Tuesday, up from 505 in the previous week.

Under the state of emergency through May 11, which also covers Osaka's neighboring prefectures of Hyogo and Kyoto, large commercial facilities, theme parks, movie theaters, karaoke establishments and restaurants serving alcohol have been asked to close.

However, there have been cases of Tokyoites drinking on streets or in restaurants and bars in neighboring prefectures that are under a quasi-state of emergency with less strict measures.

Chiba Gov. Toshihito Kumagai stressed the importance of curbing infections in Tokyo, which has confirmed over 137,000 coronavirus cases, the highest cumulative total among the nation's 47 prefectures.

Saitama Gov. Motohiro Ono said in the virtual meeting, "Since commuting to work and school will be reduced during the holidays, we should take this opportunity to make improvements" in the virus situation.

With Chiba, Kanagawa and Saitama under a quasi-state of emergency, eateries in some areas of the prefectures have been asked to close at 8 p.m. and refrain from serving alcohol.