A team of Japanese and Austrian researchers has named a new mite species "twitter" after its discovery through photos posted on the social media platform by an amateur photographer visiting a fishing spot near Tokyo.

The new species -- formally called "Ameronothrus twitter" -- was recognized after Satoshi Shimano, a professor who specializes in the study of mites at Japan's Hosei University, came across the tweeted photos by chance and then contacted the poster to find out where they were taken. 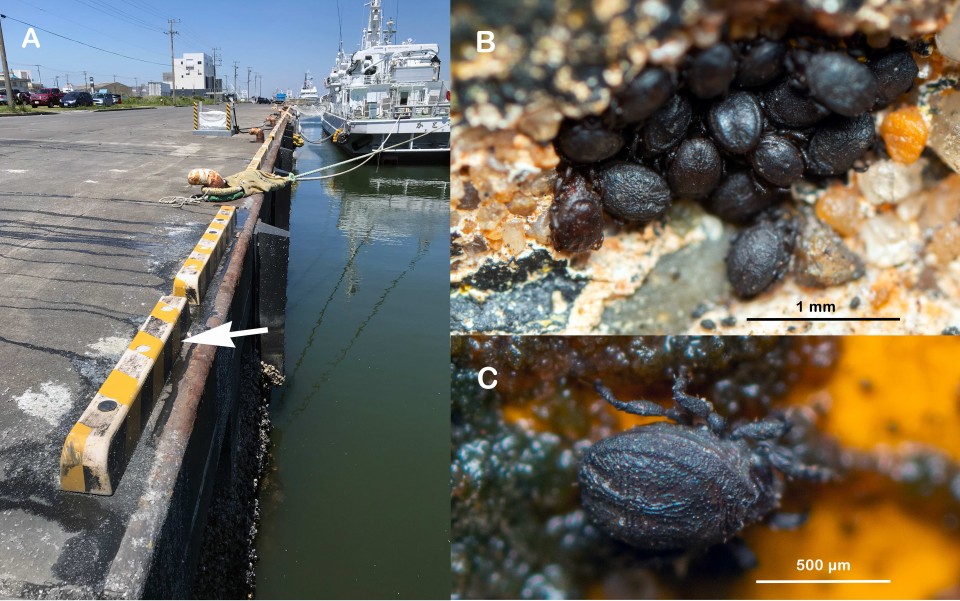 Compiled photo shows a wharf at a fishing port in Choshi, Chiba Prefecture (A), a colony of "Ameronothrus twitter" mites (B), and an original photo of the mites shared on Twitter by Takamasa Nemoto (C). (Photo courtesy of Satoshi Shimano and Takamasa Nemoto)(Kyodo)

Shimano said the find shows social media can "help speed up the time-consuming discovery of new species" and even "contribute to the development of science."

His co-researcher, Tobial Pfingstl, a professor at the University of Graz in Austria, told Kyodo News by email that his first reaction was surprise.

"It is very unusual that somebody not working as a scientist takes photos of mites and posts on Twitter," he said.

Despite the researchers' optimism about tweeted photos revealing new species, this has only happened once before so far, they say. Experts from the University of Copenhagen's Natural History Museum of Denmark identified a new parasitic fungus through a post last year, also using "twitter" as part of the name they gave it.

The new species of mites was discovered in May last year by Takamasa Nemoto while fishing at a wharf in Choshi port in Chiba Prefecture adjacent to Tokyo.

While he did not catch any fish that day, the tiny bugs caught his eye, and as a keen photographer and insect enthusiast, he took snaps and posted them on Twitter.

A few days later, after an exchange of tweets, Shimano went to the location and found the colony. Measuring 613 to 766 micrometers in body length, the mites were living on metal parking blocks at a wharf, according to a paper published in March on Species Diversity, a specialized journal.

The new species is of a similar type to coastal mites that generally inhabit rich natural environments in cold temperatures and feed on algae and lichens.

Shimano and Pfingstl had previously found coastal mites in Hokkaido, Japan's northernmost main island. The researchers were thus surprised to find the new mites in a fairly warm climate off the coast about 100 kilometers east of central Tokyo.

The new species is believed to have "adapted to warmer climates and is able to successfully colonize in man-made structures," Pfingstl said.

"Most of the Japanese coast is still unexplored in terms of coastal mites and we are very sure that there are still many things to discover," he added.

Despite the common perception that mites are mainly a household pest, about 80 percent of the world's mites live nowhere near humans and are generally "harmless," according to Shimano.

The joint research was funded by the Japan Society for the Promotion of Science and the Austrian Science Fund. The team published a paper confirming the new species on March 22.