Prime Minister Yoshihide Suga said Thursday he intends to designate Tokyo for stronger measures to combat COVID-19 amid a sharp rebound in infections and mounting pressure on hospitals.

The new steps starting from Monday are expected to remain in place until May 11 in Tokyo's central 23 wards and six cities, including Tachikawa, Musashino and Machida, according to government officials, who spoke on condition of anonymity.

They said Kyoto and Okinawa prefectures will also be designated as being on the brink of a state of emergency and such status is expected be effective until May 5. 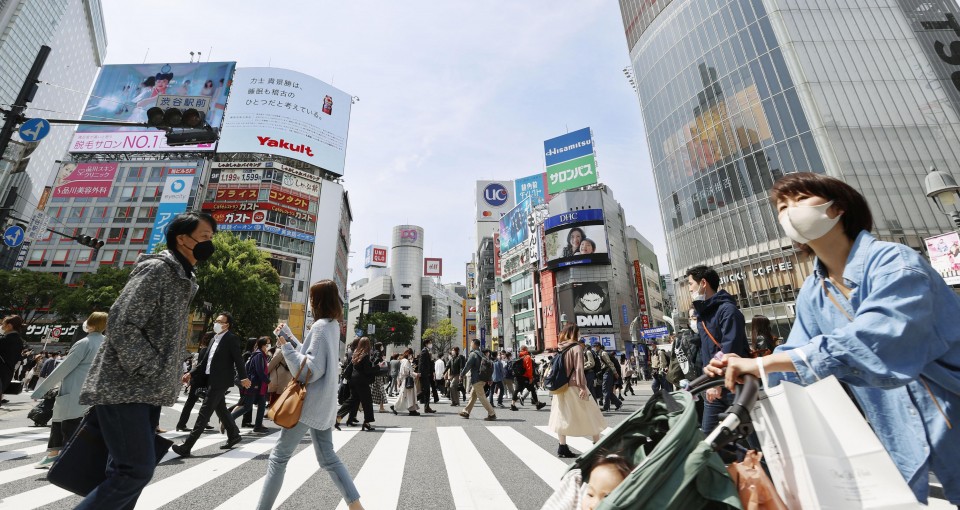 People wearing face masks walk in Tokyo's Shibuya area on April 8, 2021. The Tokyo metropolitan government plans to request the central government to designate the capital as eligible for a quasi-state of emergency to stem a resurgence in infections. (Kyodo) ==Kyodo

Suga's announcement was made a day after new coronavirus cases in Tokyo rose to a two-month peak, less than three weeks after a state of emergency was lifted. The nationwide daily tally on Thursday topped 3,000 for the second straight day, the first time in more than two months.

Suga told reporters after meeting with health minister Norihisa Tamura and other members of his Cabinet that he will make a formal decision after hearing from a panel of experts on Friday.

With less than four months to go before Tokyo hosts the Summer Olympics, the prime minister said he will consider whether other prefectures should also be placed under what has been regarded as a quasi-state of emergency.

The meeting was held after a request from Tokyo Gov. Yuriko Koike to the government to grant her the authority to take stronger measures, which could include bringing forward closing times for restaurants and bars to 8 p.m. from 9 p.m. in densely populated areas.

Koike told reporters that the emergency should cover the Golden Week holidays from late April through early May, one of the busiest periods of the year for travel. 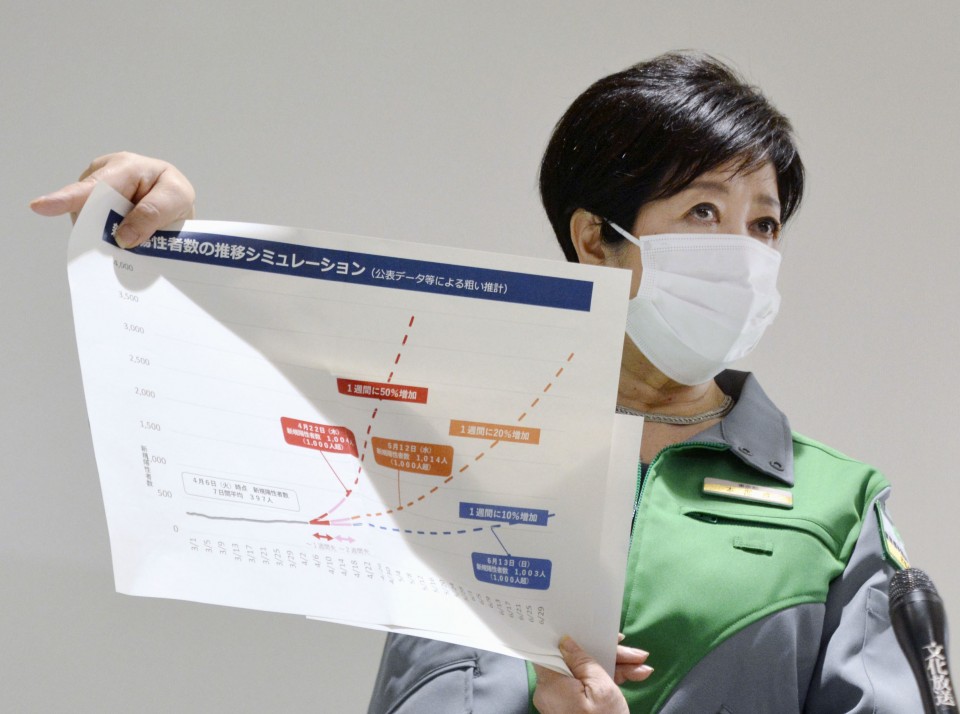 "Reducing the flow of people is key in preventing infections," she said.

Coronavirus cases have been creeping up since a state of emergency covering Tokyo ended on March 21. The capital saw 555 new infections on Wednesday, the most since early February, and reported 545 on Thursday.

Koike had voiced concern the capital could go the way of Osaka Prefecture, which was quicker to ease restrictions and has since seen infections climb to record highs as more-contagious variants of the coronavirus have spread quickly.

"We must immediately take steps given the risk of an explosive rise in infections," Norio Omagari, head of the Disease Control and Prevention Center at the National Center for Global Health and Medicine, said at a meeting held by the Tokyo metropolitan government.

Chief Cabinet Secretary Katsunobu Kato said at a press conference the government will "promptly consider" Koike's request for the quasi-state of emergency, currently in effect in Osaka, Hyogo and Miyagi.

Kanagawa Gov. Yuji Kuroiwa and Chiba Gov. Toshihito Kumagai both said they will not make a similar request yet but could do so if the situation worsens.

A legal revision that came into effect in February introduced the quasi-state of emergency as a way to take targeted steps to bring down infections while keeping the economy going as much as possible. Governors can now designate cities and towns for stronger measures, unlike the full-fledged version, which covers an entire prefecture.

The quasi-state of emergency also carries a smaller fine for restaurants and bars that refuse to comply with orders to shorten business hours, a maximum of 200,000 yen ($1,800) rather than up to 300,000 yen.