A health ministry panel may decide as early as May 20 whether to approve Moderna Inc.'s COVID-19 vaccine for use in Japan, government sources said Tuesday, possibly paving the way for a second type of shot to be available in the country after the one developed by Pfizer Inc.

Japan has a supply agreement with Moderna for 50 million doses of the vaccine, enough for 25 million people or about one-fifth of the entire population. Their delivery would help speed up the country's rollout ahead of this summer's Tokyo Olympics. 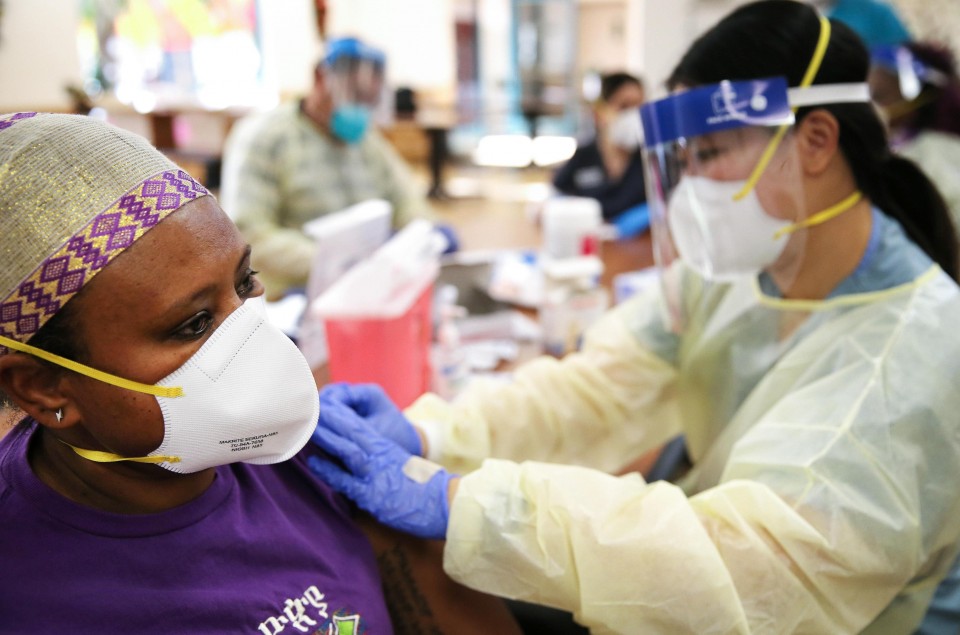 A nurse (L) receives a dose of the Moderna COVID-19 vaccine from a public health nurse on Jan. 7, 2021 in Los Angeles, California. (Getty/Kyodo)

The U.S. biotechnology firm's Japanese partner Takeda Pharmaceutical Co. said on March 5 it had filed for approval from the Ministry of Health, Labor and Welfare to import and distribute the vaccine.

If the panel greenlights it on May 20, health minister Norihisa Tamura could give formal approval the following day.

Japan began its vaccination program in mid-February but lags behind other advanced countries such as Israel, Britain and the United States. Just over 1 percent of its population of 126 million has received at least one shot, mostly health care workers.

In a shift from the government's stance of having municipalities deal with administering shots, Prime Minister Yoshihide Suga on Tuesday instructed Defense Minister Nobuo Kishi to set up a large-scale vaccination center in downtown Tokyo staffed by Self-Defense Forces doctors and nurses.

The center will launch on May 24 and will be able to inoculate about 10,000 people aged 65 or older per day, with residents of the capital and neighboring Kanagawa, Chiba and Saitama prefectures being eligible.

A total of about 900,000 people, 10 percent of the elderly in the area, are expected to use the facility by the end of its three-month run.

According to people familiar with the plan, the vaccination center will use the Moderna vaccine rather than Pfizer's to avoid eating into supply intended for municipalities.