Some 22 percent of major companies in Japan are planning to cut new hires for the business year starting next April from the current year, a Kyodo News survey showed Sunday, indicating many firms remain cautious about the outlook amid the coronavirus pandemic.

In the survey covering 110 firms, many of those planning to curb new hires were in sectors hit hard by the pandemic such as transport and tourism, which saw demand evaporate. 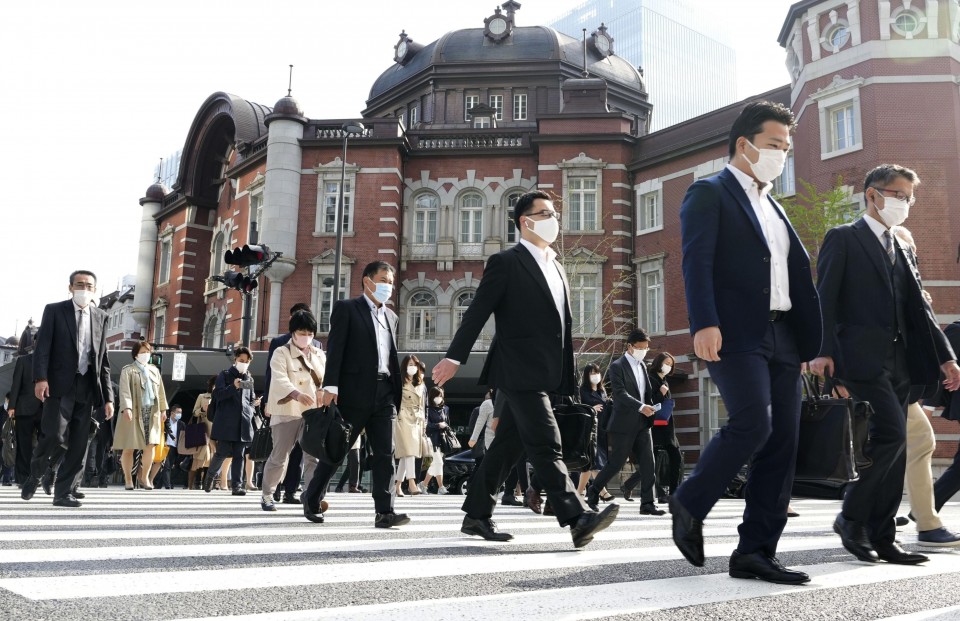 People wearing face masks to protect against the novel coronavirus walk near JR Tokyo Station on April 12, 2021, when quasi-emergency measures against the virus officially commenced in the capital. (Kyodo) ==Kyodo

Major Japanese companies recruit new graduates at the start of each fiscal year, often beginning the hiring process roughly a year in advance.

According to the Kyodo survey, a total of 24 firms in sectors ranging from materials to energy are scaling back hiring for fiscal 2022. Thirty-seven firms, or 34 percent, said they will maintain the same levels as fiscal 2021.

For fiscal 2021, about 46 percent reduced new hires from the previous year while 12 percent increased hiring. Some 37 percent stuck to levels close to hiring for fiscal 2020, the survey showed.

Despite the country's economy emerging from the initial shock of the COVID-19 crisis, economists say it remains on shaky ground, pointing to a divergence between manufacturers and services providers in the pace of recovery.

The pandemic has changed how companies look for promising graduates. All but three companies in the Kyodo survey said they will hold job fairs or conduct interviews online and 52 percent are planning to use online tools actively even after the health crisis ends.

A total of 69 percent of the firms said they will either maintain or expand remote work even after the pandemic subsides.

Asked what challenges teleworking poses, 83 percent pointed to a lack of communication among workers while 61 percent referred to a negative impact on training employees.

However, when asked about the impact on labor productivity, 55 percent picked "no change," while a combined 31 percent said productivity had improved.

"We'd like to help our employees improve the balance between their work and private lives," an energy company said. A firm in the services industry said, "There are types of jobs that are not suitable for teleworking so we need to see whether it is appropriate."

A combined 81 percent already allow or will consider allowing employees to take side jobs.

Forty-two percent already had such a system in place before the pandemic and 7 percent introduced it after the COVID-19 crisis.

Taking side jobs is seen as beneficial for longer-term career development but some companies are cautious because employees could end up working excessively long hours or get jobs at competitors.