Torchbearers for this summer's Tokyo Olympics on Tuesday ran laps in an empty park in Osaka after the flame relay in the western Japan prefecture was rerouted from public roads due to a sharp rebound in coronavirus infections.

A day before the 100-day milestone to the opening of the Olympics, Osaka, a metropolis that recently has been hit by record numbers of daily COVID-19 infections, became the first prefecture in Japan to give up on holding the relay in its planned format.

Runners carried the flame for about 200 meters in the Expo '70 Commemorative Park in Suita, which was closed to the public, instead of on public roads where large crowds could have gathered. 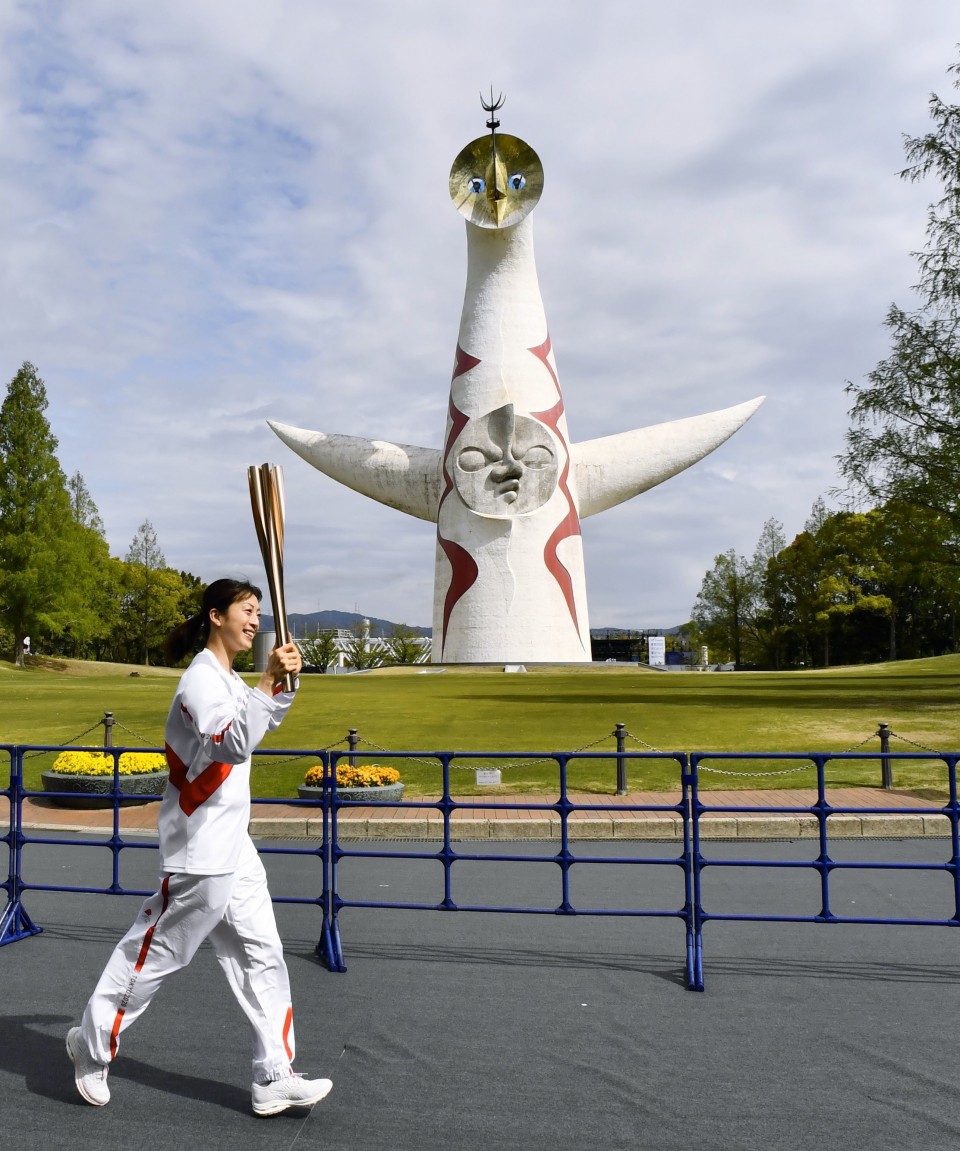 Each was allowed to invite up to four people to watch, including family. More than 100 torchbearers are scheduled to run over two days at the park in Osaka, the 10th prefecture that the flame has visited since the start of the relay on March 25, while public support for the Olympics remains low in Japan.

With the event being streamed online, many torchbearers waved and posed for cameras during their run in the park, which was created on the site of the 1970 Japan World Exposition and known for the iconic Tower of the Sun artwork by the late Taro Okamoto.

"I am very grateful that the relay took place, no matter what the format was," said Aya Terakawa, a swimming bronze medalist at the 2012 London Olympics, after running her segment in front of her parents.

Last week, the Tokyo Games organizing committee decided not to run the relay along public roads in Osaka after the prefectural government declared a medical state of emergency over the virus and asked residents to refrain from nonessential outings.

The prefecture confirmed 1,099 cases of infections on Tuesday, topping 1,000 cases for the first time.

Tokyo, which will host its first Summer Games since 1964, has also been seeing an increase in infections. It reported 510 cases on Tuesday, compared with 399 cases confirmed a week ago.

While the organizing committee has said the format of the games may change due to the pandemic, the need to cancel the relay on public roads in Osaka adds to the skepticism over whether the Olympics can go ahead this summer.

The flame was originally scheduled to pass through over 15 municipalities and popular tourist spots, including the Osaka Castle Park before the end of the prefecture's leg of the torch relay on Wednesday.

The 121-day relay, which is set to involve around 10,000 runners, has been held with a number of anti-virus steps in place.

However, according to a Kyodo News poll conducted between Saturday and Monday, only 13.2 percent said the relay should continue until it passes through all of Japan's 47 prefectures before the Olympic opening ceremony on July 23.

The Tokyo Olympics were postponed in March last year due to the global health crisis, just two days before the nationwide torch relay was scheduled to begin.