The first batch of the coronavirus vaccine developed by U.S. pharmaceutical maker Moderna Inc. arrived in Japan on Friday, with the government planning to use it at mass vaccination centers following expected approval in May.

It will become the second type of shot available in the country after the one developed by Pfizer Inc. if a health ministry panel gives it the green light, possibly by May 20. 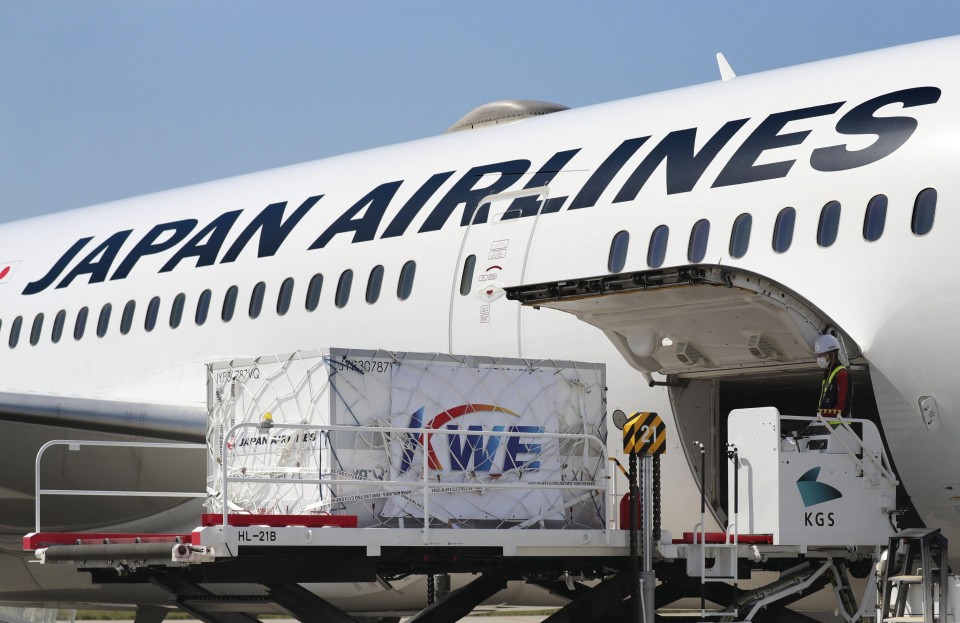 The first batch of Moderna Inc.'s COVID-19 vaccine to arrive in Japan is unloaded from an airplane at Kansai airport in Osaka Prefecture on April 30, 2021. (Kyodo)

The Moderna vaccine that arrived at Kansai airport in Osaka Prefecture from Belgium is expected to be used at large-scale COVID-19 vaccination centers that the central government plans to open in Tokyo and Osaka, according to the government.

Japan has a supply agreement with Moderna for 50 million doses of the vaccine, enough for 25 million people, or about one-fifth of the entire population.

Their delivery is expected to help speed up the inoculation rollout as Japan faces a resurgence in infections.

On Friday, Tokyo reported 698 new cases, bringing the total number of infections in April to 18,090, the third-highest month for the capital following January at 40,367 and December at 19,369.

Osaka Prefecture, which has been under the country's third state of emergency with two neighboring prefectures in western Japan and Tokyo, confirmed 1,043 new cases the same day. Osaka has recently been seeing its cases top 1,000.

The country currently lags far behind other advanced countries including the United States in the progress of vaccinations.

Taro Kono, the minister in charge of the country's vaccination efforts, officially announced at Friday's press conference that the government will deliver vaccine supplies to municipalities across the country by the end of June, enabling all 35.49 million seniors to receive their second shots.

The health ministry requested municipalities, which are planning to complete inoculations of elderly people in August or later, as well as those still undecided, to come up with a plan to finish vaccinations by the end of July.

Prime Minister Yoshihide Suga is aiming for the completion of inoculation of the elderly by July.

As part of efforts to accelerate the vaccine rollout, Suga said the government will pay extra for doctors and nurses who administer shots during night time and on holidays, as well as increase support for cooperative institutions.

Kono also revealed that the government will pay health care facilities which dispatch personnel to group vaccination sites 7,550 yen ($69) per hour for a doctor and 2,760 yen for a nurse.

Moderna's Japanese partner Takeda Pharmaceutical Co. has filed for approval of the vaccine with the Ministry of Health, Labor and Welfare. A health ministry panel is likely to make a decision as early as May 20 with formal approval to follow the next day.

Japan has started its vaccination rollout using the Pfizer vaccine, and among the population of 126 million over 2.35 million health care professionals and others had received at least one shot as of Wednesday, while over 141,000 elderly received their first shots as of Thursday.

But the vaccination rate comes out at less than 2 percent of the nation's population.

The government, meanwhile, has decided that a large-scale vaccination center due to open in downtown Tokyo as part of efforts to speed up inoculation of the elderly will require reservations in advance to avoid crowding, according to government sources.

The center in Tokyo's Otemachi district is expected to be used by some 900,000 people aged 65 or older residing in the capital and neighboring Kanagawa, Chiba and Saitama prefectures. It will be launched on May 24 and staffed by Self-Defense Forces doctors and nurses, according to the government.