U.S. President Joe Biden's diplomacy during his first 100 days in office has largely been about mustering a network of coalitions among allies and like-minded countries to counter a more authoritarian and assertive China.

But fleshing out a coordinated China strategy even with the closest U.S. allies in East Asia does not always seem easy in the face of deep-seated discord between Japan and South Korea, as well as their differing diplomatic priorities and levels of dependence on the world's second-largest economy. 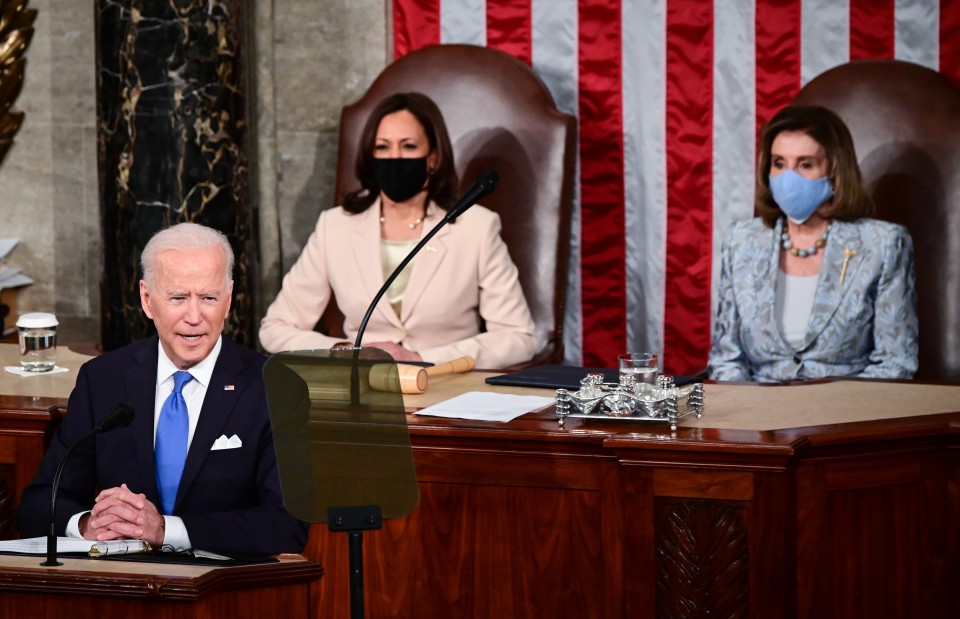 U.S. President Joe Biden addresses a joint session of congress as Vice President Kamala Harris (L) and Speaker of the House U.S. Rep. Nancy Pelosi (D-CA) (R) look on in the House chamber of the U.S. Capitol on April 28, 2021 in Washington, DC. (POOL/Getty/Kyodo)

The Biden administration's efforts have already yielded some results, with Japan showing greater convergence with the United States to take on Beijing, and a group of four democracies known as the Quad -- the United States, Japan, Australia and India -- shaping up as a key arena for cooperation in the Indo-Pacific region.

"I think this administration believes that getting Asia policy right is the key to getting China policy right, instead of the other way around," said James Schoff, a senior fellow at the Carnegie Endowment for International Peace, a Washington-based think tank.

This means "part of the process of dealing with the challenge of China is really connecting and reconnecting with our allies and partners in the region," the expert on U.S.-Japan relations said, adding that the administration is currently on the "right track."

In East Asia, however, the diplomatic picture is complicated.

While Japan has showed eagerness to meet the Biden administration's expectation that it will play a central role in efforts to push back against China, South Korea has been more cautious about antagonizing its largest trading partner and a key player in inter-Korea peace talks.

In mid-April, following their first meeting at the White House, Biden and Japanese Prime Minister Yoshihide Suga released a joint statement that marked the "clearest-ever expression of concern" vis-a-vis China issued by the leaders of the two countries, according to a Japanese diplomat in Washington.

Calling out China by name, the statement cautioned against any unilateral attempts to change the status quo in the East China Sea, where the Japanese-administered, Chinese-claimed Senkaku Islands are located.

It also expressed "serious concerns" regarding human right abuses against Muslim Uyghurs in China's Xinjiang region, and even went as far as to take up Taiwan, Beijing's most sensitive territorial issue.

With the two countries also affirming broader and deeper cooperation with regard to security, economy, technology and diplomatic issues, the Biden-Suga summit is "in some ways going to be considered the model for how to go forward," Schoff said.

As the attention shifts to South Korean President Moon Jae In's planned visit to the White House in May, Schoff said it will be important for Moon and Biden to come up with a "sense of shared strategic purpose" or "mutual understanding" of their goals in the region, which would determine how deeply and closely the two countries can coordinate on China policy.

But doing so could be "more challenging" for Seoul than it was for Tokyo, given the almost dependent relationship with China on the economic front and the role China could play in dealing with North Korean issues, an "overwhelming" priority for Moon, Schoff added.

While the Biden administration is unlikely to be expecting the same kind of synergy with South Korea as seen with Japan on China issues, he said, "It's going to be a more contentious or more difficult relationship if the Moon government can't find a way to meet the United States halfway, at least on some of the China initiatives and climate change and other goals and policy objectives that are so important to the Biden team."

Meanwhile, another tier of cooperation which the Biden administration has emphasized -- trilateral coordination between the United States, Japan and South Korea -- has been overshadowed by the increasingly frayed ties between Tokyo and Seoul amid long-running disputes over wartime compensation issues.

The Biden administration has been encouraging communication such as by hosting a meeting of national security advisers from the three countries in early April, with one official expressing concern that the political tensions between the Asian allies are running high enough to impede the group's ability to be "effective in Northeast Asia."

In addition to coordinating polices to address North Korean nuclear and missile threats, the trilateral framework is seen as having the potential to work on a secure supply chain for semiconductors, a move sought by the Biden administration in hopes of reducing reliance on China for such items, which are vital to the production of high-tech goods.

Some Japanese experts have been pessimistic that the Japan-South Korea relationship will substantially improve anytime soon, citing obvious skepticism on the side of Tokyo toward working with Seoul to further address wartime disputes after their wrangling over a 2015 bilateral deal, under which the two countries had agreed to settle once and for all the issue of Korean women forced into Japanese wartime military brothels.

"Even though there is a slight chance for a small cooperation between two sides, a radical change cannot be foreseen," Yuichi Hosoya, a professor of international politics at Japan's Keio University said at a recent online event organized by Stanford University's Asia-Pacific research center.

Schoff said the bilateral ties have deteriorated so much in the last few years that there is "no incentive" for them even to try to appear to be more on the same page.

"I think the Biden team is going to talk about trilateralism, but I think we're really going to be more focused on bilateral initiatives -- U.S.-Japan, U.S.-South Korea -- and trying to make progress with Asia policy in those bilateral relationships rather than trying to really force a trilateral caucus or solution to Asia problems," he added.