Myanmar's ruling military on Tuesday laid out the details of its martial law order declared in parts of Yangon, including setting the death penalty as a possible punishment for treason and other offenses against the government.

As part of its martial law order, the State Administration Council of the military, the top decision-making body set up following the military takeover, said it would also assume the administration of Yangon's courts. 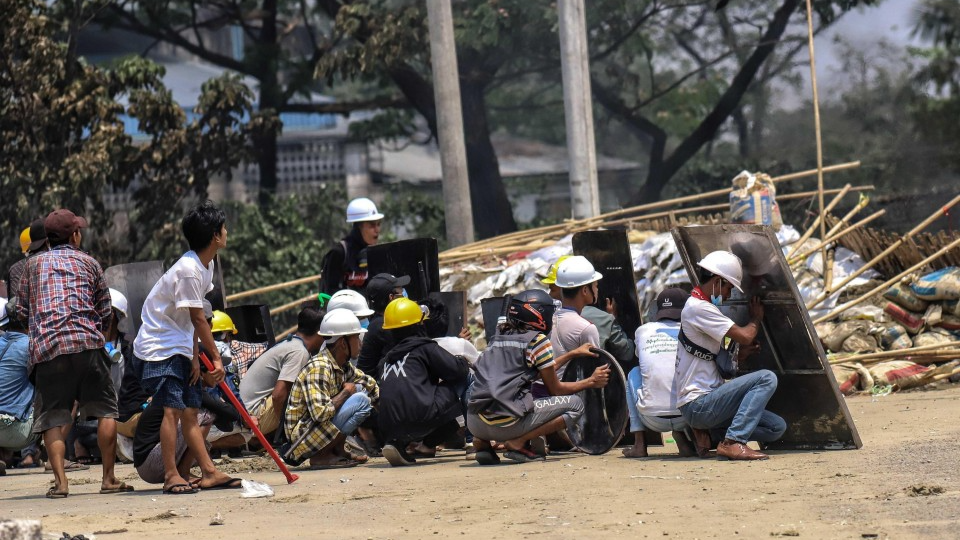 Protesters take cover as police intervene in a protest in Yangon on March 15, 2021. (Anadolu Agency/Getty/Kyodo)

In an apparent attempt to quell growing protests against the Feb. 1 coup, the military junta said it would impose harsh sentences, including lengthy prison terms or even death, for offenses including treason and dissent, obstructing the military or civil service, spreading false news and incitement of fear, according to the entire martial law order published in a state newspaper.

The offenses are among 23 categories of crimes that the order says are subject to court-martial with no appeals allowed for decisions or convictions. However, it said an application to reverse a death sentence could be made to Senior Gen. Min Aung Hlaing, chairman of the State Administration Council, within 15 days of a conviction.

Martial law was declared in two Yangon townships, Hlaingthaya and the neighboring township of Shwepyithar, on Sunday, the first such declarations in the city since the military coup, followed by orders in four more townships in Yangon on Monday.

The move is likely to draw even more criticism from the United States, Europe and other countries, calling for a halt to the intensified crackdowns on protesters by security forces that have claimed dozens of lives since February.

A spokesman for the Office of the U.N. High Commissioner for Human Rights said Tuesday that at least 149 people had died in crackdowns on protests in Myanmar. However, on Monday, a Myanmar human rights organization, the Assistance Association for Political Prisoners, had already placed the death toll at 183 people in total.

On Monday, Stephane Dujarric, spokesman for U.N. Secretary General Antonio Guterres, told a press conference the U.N. chief is "appalled by the escalating violence in Myanmar at the hands of the country's military," adding, "The killing of demonstrators, arbitrary arrests and the reported torture of prisoners violate fundamental human rights and stand in clear defiance of calls by the Security Council for restraint, dialogue and a return to Myanmar's democratic path."

The concern over Myanmar was echoed by Japanese Foreign Minister Toshimitsu Motegi and U.S. Secretary of State Antony Blinken on Tuesday, as they spoke after a bilateral meeting in Tokyo.