The third batch of Pfizer Inc.'s COVID-19 vaccine arrived in Japan on Monday as the country prepares to expand its inoculation program for health care workers.

The shipment of up to 526,500 doses of the only novel coronavirus vaccine so far approved for use in Japan was delivered to Narita airport near Tokyo from Belgium, where they were produced.

Including the shipment, the Japanese government has said it will receive up to 2.66 million doses in March alone, with six shots taken from each vaccine bottle. It has received around half, or 1.36 million doses, in the three shipments so far. 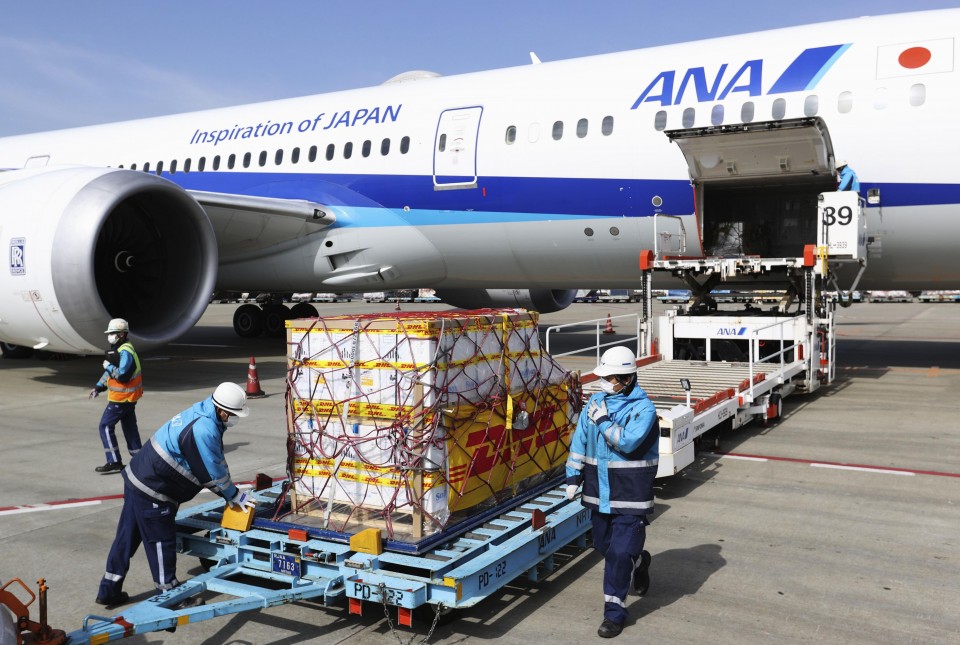 Pfizer said Monday that Japan had also approved a request to allow its vaccine to be transported and stored at conventional freezer temperatures instead of the ultracold conditions previously required.

The change, which will allow the vaccine to be stored at minus 25 to minus 15 C for up to two weeks, is expected to ease the burden of procuring ultralow cold storage equipment for vaccination sites.

It will also enable the vaccine to be distributed more widely to medical institutions lacking the ultracold freezers previously required to store the doses at temperatures between minus 80 C and minus 60 C.

As for vaccines from other drugmakers, Chief Cabinet Secretary Katsunobu Kato told a press conference that a clinical study is under way in Japan for U.S. company Johnson & Johnson's single-dose vaccine, which the U.S. government approved for emergency use last week.

Johnson & Johnson's COVID-19 vaccine is the first single-dose type approved in the United States. The Pfizer and Moderna Inc. vaccines are both administered in two doses.

Japan launched the first phase of its vaccination program for 40,000 medical workers at 100 hospitals nationwide on Feb. 17 as part of efforts to examine the safety of the vaccine developed by the U.S. pharmaceutical giant and its German partner BioNTech SE.

The health ministry said Monday that the breakdown of a freezer at a medical institution conducting inoculations in this phase had rendered 172 vials -- roughly 1,000 doses -- of the vaccine unusable.

Authorities will replace the vials on Tuesday and investigate the cause of the malfunction. The name of the facility and its location were not disclosed.

Full-scale inoculation of 4.7 million health care workers will begin this week, after the doses have been distributed to local governments tasked with administering shots across the country.

Around 36 million people aged 65 and older are expected to get shots from April 12, followed by those with preexisting conditions, such as diabetes, and workers at elderly care facilities, and then finally the general population.

Taro Kono, the minister in charge of the vaccine rollout, has said that the government aims to deliver doses necessary to inoculate more than 40 million people -- health care workers and elderly citizens -- to local governments by the end of June.

The government has broadly agreed with Pfizer over the mass procurement, although it is supposed to obtain approval from the European Union, which controls the export of coronavirus vaccines produced within the bloc, according to Kono.