U.S. President Joe Biden on Friday called for a united stand against hate and racism amid heightened concern over violence against Asian Americans in the wake of a shooting rampage in the Atlanta area that killed six women of Asian descent.

"Hate can have no safe harbor in America. It must stop. And it's on all of us, all of us together to make it stop," Biden said during his visit to the capital of the southern state of Georgia, just days after the shootings at three spas left a total of eight people dead. 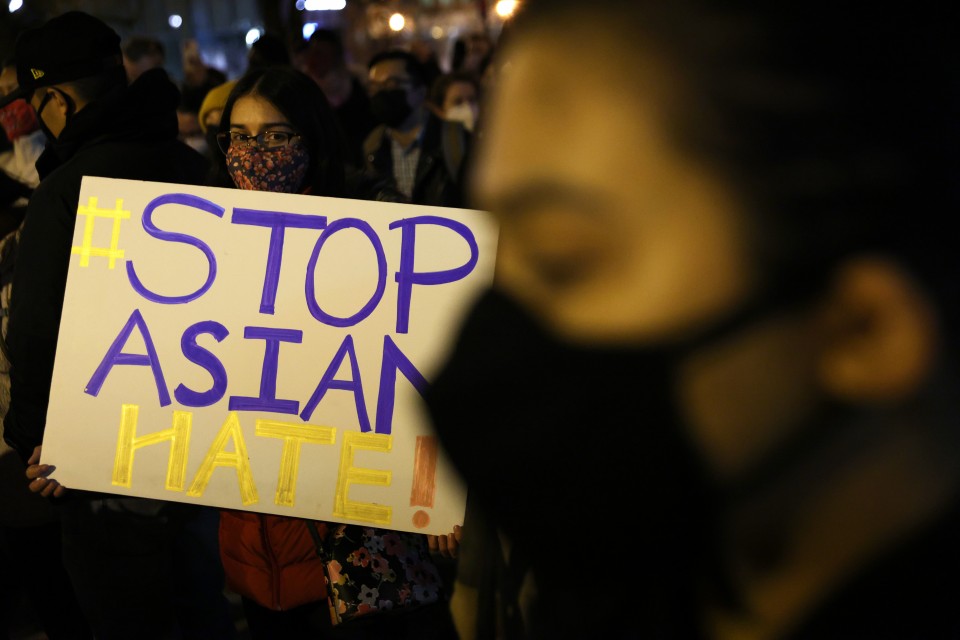 Activists participate in a vigil in response to the Atlanta spa shootings on March 17, 2021, in Washington. (Getty/Kyodo)

Vice President Kamala Harris, speaking before Biden, said, "Whatever the killer's motive, these facts are clear: Six out of the eight people killed on Tuesday night were of Asian descent. Seven were women. The shootings took place in businesses owned by Asian Americans."

"The president and I will not be silent. We will not stand by. We will always speak out against violence, hate crimes and discrimination wherever and whenever it occurs," added Harris, the first female, first black and first Asian American vice president.

A white man has been charged with murder in the case. He has told police he has a "sexual addiction" and that the massage parlors were "a temptation for him that he wanted to eliminate," according to authorities.

While the racial aspect of the motive remains unclear, the country has seen a rise in violent hate crimes and discrimination against Asians and Asian Americans, which has coincided with the spread of the novel coronavirus first detected in China in late 2019.

Critics have attributed the rise in hate crimes partly to the rhetoric of Biden's predecessor Donald Trump, who frequently repeated the phrase "Chinese virus" when speaking of the pandemic.

Shocking footage of attacks on elderly Asian people has also been circulating on social media recently, such as a video of a man abruptly shoved to the ground in the Chinatown area of Oakland, California.

On Wednesday, an elderly Asian woman was reportedly attacked and punched by a man on a San Francisco street, but she fought back, leaving him bloodied and requiring hospitalization.

In 2020, there were 29 racially motivated crimes against people of Asian descent reported in New York City, a major center for the Asian American population, with 24 of the incidents attributed to "coronavirus motivation," CNN said Thursday, citing data from the New York Police Department.

In contrast, the city had only three reports of racially motivated crimes against people of Asian descent in 2019, it said.

A group tracking incidents of violence and discrimination against Asian Americans and Pacific Islanders in the United States said that Asian American women, in particular, reported being targeted in hate incidents 2.3 times more than men. The group cited businesses as the primary site of discrimination, followed by public streets and public parks.