FEATURE: Future of Philippine agriculture through eyes of Japan-trained farmer

Most sectors of the Philippine economy recorded a deep decline in 2020 due to months of lockdown arising from the COVID-19 pandemic.

However, agriculture posted good growth, raising optimism among policymakers that this sector would remain one of the key drivers in stimulating the economy this year.

The government believes it will stay on track, as it can withstand the pandemic's ill effects.

Agriculture has been the backbone of the country's economy, with more than 30 percent of the population directly or indirectly involved in this sector. Although it is a neglected sector, farmers remain committed to providing food for the growing number of Filipinos.

One of them is 30-year-old farmer Neil Anthony Aban from Mobo, Masbate -- a province in the eastern Philippines, about 200 nautical miles from the capital Manila. 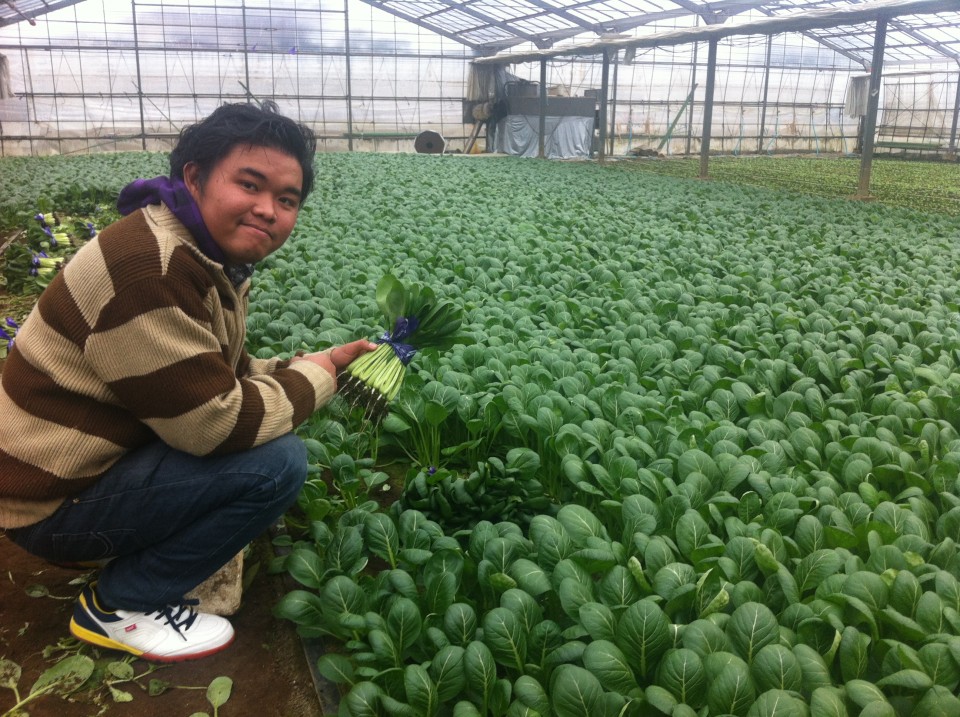 Farming was not Aban's original career choice, rather he was expecting to land a white-collar job in Manila.

"I thought before that farming is really a very tiring job," Aban told Kyodo News, adding that in Masbate, "most people into farming are poor."

Having decided against taking up agriculture in college, he opted for a nursing degree. However, due to financial constraints, Aban failed to finish the course and ended up working on his family's small farm to help bring in money.

"I was the only one who attended from my village. It was only a random decision I made as I was not busy at that time," he said.

Inspired by the other farms they visited during the training sessions, he said, "In time, I would manage a farm like those."

In May 2014, Aban joined 19 other Filipino participants selected for the Young Filipino Farm Leaders Training Program in Japan, where they trained at various regional host farms. 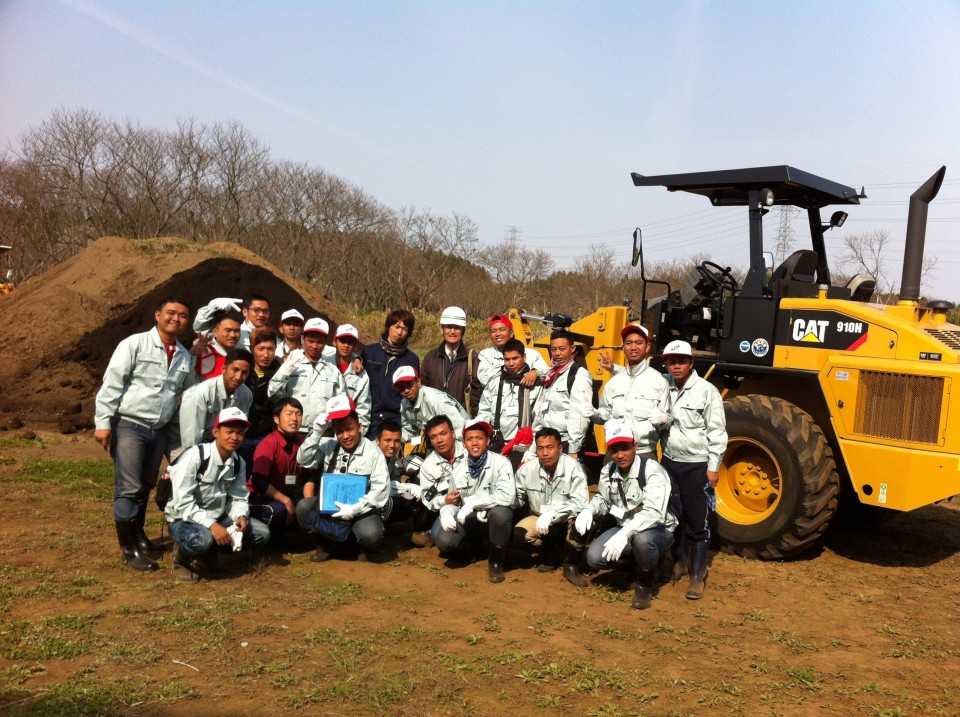 The Japanese government, through the Japan Agricultural Exchange Council and the Ministry of Agriculture, Forestry and Fisheries, supports the program, which officially started in 1986 for the benefit of Association of Southeast Asian Nations member states.

"I was so excited that time because that will be my first time going to Japan and to go outside the country," Aban said.

"I stayed with a host family who handled organic farming. Their main product is oranges, but there are other varieties of fruits and vegetables there," he said, recalling with fascination his experience in witnessing Japan's advances in the agriculture sector.

"After some time, I realized the struggles of old Japanese farmers because they are the only ones taking care of their farms," he said.

Aban managed 10 hectares of farmland in Kanagawa Prefecture, southwest of Tokyo, from 7 a.m. to 5 p.m. He loved the Japanese work ethics, time discipline and hospitality. Aside from farm work, his host family also taught him marketing management, which is essential in production.

"There were many moments I wanted to surrender because it's really hard. But I always looked at the impact of this one-of-a-kind experience to my country."

After eleven months, Aban completed his hands-on practical training from Japanese farmers and left the country. Although he was sad to leave, he was motivated to apply everything he learned from his experience in Japan back home in the Philippines.

"When they returned to the Philippines, they became champions in agricultural development by influencing members of the community, especially the youth, to go into agriculture," said Rosana P. Mula, assistant director of the Agricultural Training Institute in the Philippines.

"They need to incorporate the Japanese strategies and mechanisms to not only improve their respective farms but to share their learning with the young farmers in their communities," Mula said.

Upon returning to the Philippines in April 2015, Aban transformed his land, "literally" a backyard garden, into a larger production farm. He called it "Denny's integrated farm" that offers short courses on farming.

"I never thought that I could transform my farm into a learning site," he said, explaining the process of accreditation as a learning hub by the Agricultural Training Institute.

In December 2018, his farm became an official farm school, certified by the Technical Education and Skills Development Authority. 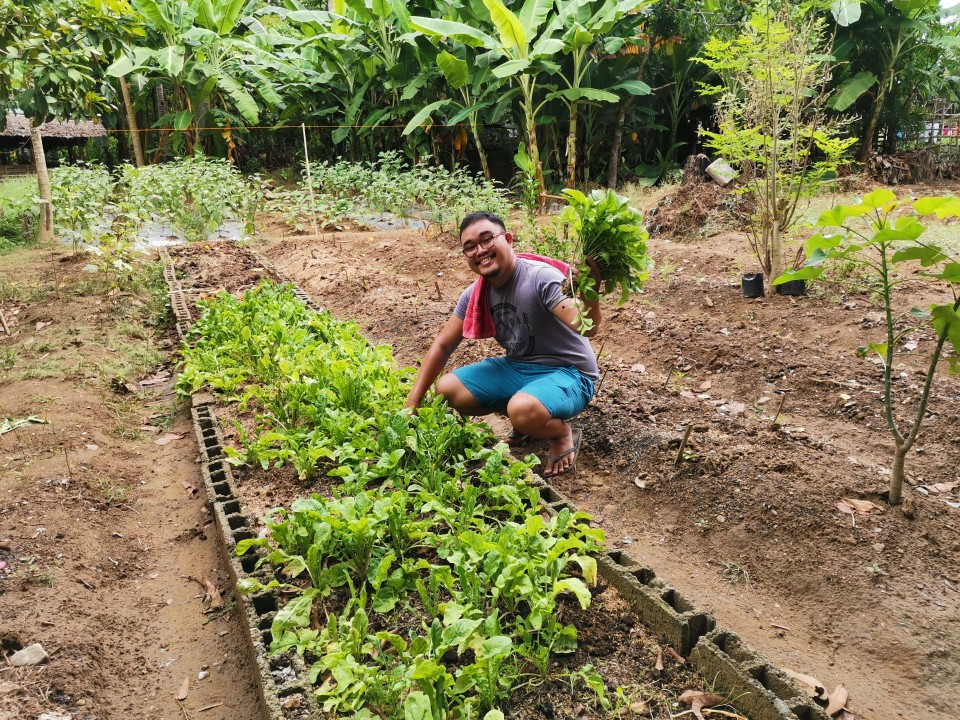 Neil Anthony Aban, as pictured in December 2018, converted his small farm into a farm training school in Masbate in the Philippines. (Photo courtesy of Neil Anthony Aban)(Kyodo)

Through the establishment of training facilities such as Learning Sites for Agriculture and Schools for Practical Agriculture, in-school and out-of-school youths can freely immerse themselves in hands-on farming activities.

"The training abroad inspired me to become a better person, to do work ethics effectively, to know the best technology and farm practices and to become a role model in the Philippine society."

"I hope I could add more classrooms in five years' time, develop more farming procedures and transform it into an eco-tourism site where visitors can do kayaking in the nearby river," he said.

Aban feels inspired and motivated to share with others what he had learned and teaches the potential of agriculture, especially in times of crisis.

"It's really challenging. Before no one believes in me, no one wants to attend my training. From zero enrollees, now I have more than 200 participants," he said. 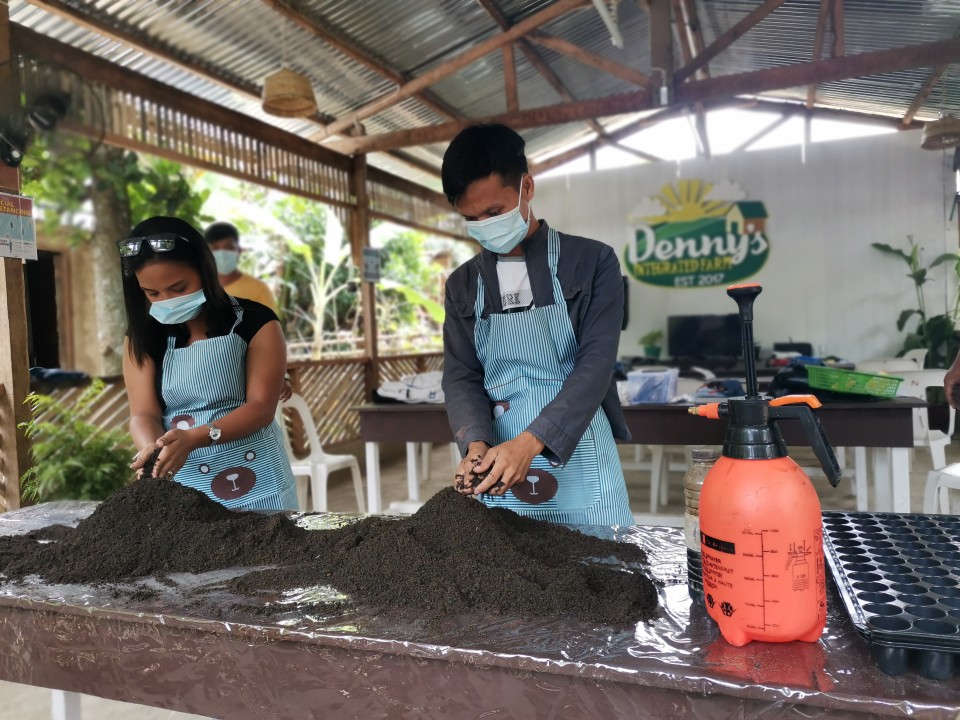 Photo taken in June 2019 shows trainees learning about fertilizing procedures at a farm school in Masbate in the Philippines. (Photo courtesy of Neil Anthony Aban)(Kyodo)

"Food is fundamental for the survival of humanity," Mula said, as she discussed the importance of Japanese training to encourage more people to go into agriculture.

Since 1986, a total of 592 participants have completed the training.

A new batch of 21 Filipino trainees awaits their departure for Japan, which was postponed last April 2020 due to the pandemic.

"The global COVID-19 pandemic may have decimated a lot of businesses worldwide, but it did not hamper food production. This program is important to educate people on the importance of agriculture and the ways and practices to make growing food sustainably for the generations to come," Mula said.

Although many farmers lack access to information technology, Aban is making a tremendous social change in Philippine agriculture.

"I always tell them not to rely on harvesting and production alone. There are many ways to improve it. We need to see the value-adding components of each product as part of our strategies," he said.

For him, passion and patience are key ingredients for success, values that he picked up from his experiences here and abroad.

"It's really my advocacy to help the youth and to help them appreciate agriculture in today's time. They really should be into farming because it's the Philippines' paramount potential," he said.

As Aban has proven, agriculture does not doom one to poverty but can lead to success in life.

"Remember, I really didn't like farming before, until I was inspired by its greatness."