Shinji Sato is a Japanese fourth-grader born the week before the disastrous magnitude 9.0 earthquake and tsunami struck Japan's east coast in March of 2011.

Carried out of the hospital shortly before the tsunami swallowed up his coastal town of Yamada in Iwate Prefecture on March 11, Sato grew up strong and healthy in a community that benefited in its recovery from a group of sumo wrestlers who charged forward to provide aid. 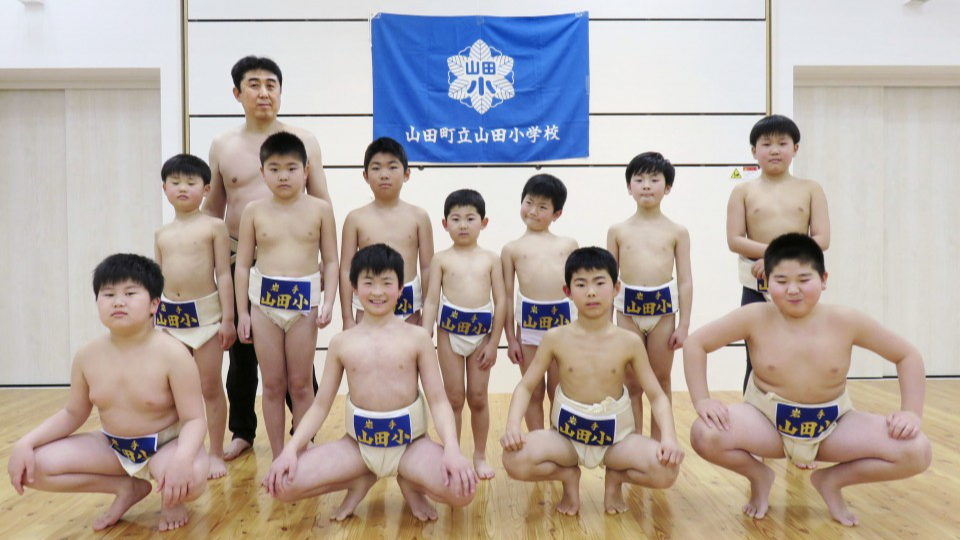 Young sumo prospects including Shinji Sato (front row, 2nd from R) gather for a group photo with their coach Tetsuya Sato (back) in Yamada, Iwate Prefecture, on Feb. 28, 2021. (Photo courtesy of Tetsuya Sato)(Kyodo)

Three months after the disaster, officials from the Japan Sumo Association visited Yamada and other areas to provide comfort and encouragement to victims by sending wrestlers out to interact with local communities.

Among the visiting wrestlers was Hakuho, at the time the sole athlete at the sport's highest rank of yokozuna. Hakuho performed the dohyo-iri (ring-entering) purification ceremony and it was baby Sato he chose to pick up and hold on the occasion, to the delight of the child's father.

Heartbroken to hear the town's dohyo had been swept away in the tsunami, Hakuho set to rectifying the situation. With funds collected from the Rikishikai, the association of salaried sumo wrestlers, added to his own prize money, the dohyo was rebuilt in 2012.

Later, a similar gift was made to Miyagi and Fukushima prefectures which, along with Iwate, were hardest hit by the quake and tsunami.

"I wanted to show my support to the children and let them experience the many good things sumo has to offer," said the 35-year-old Hakuho, whose birthday falls on the quake's anniversary.

"I'm happy to know that ring is being used today." 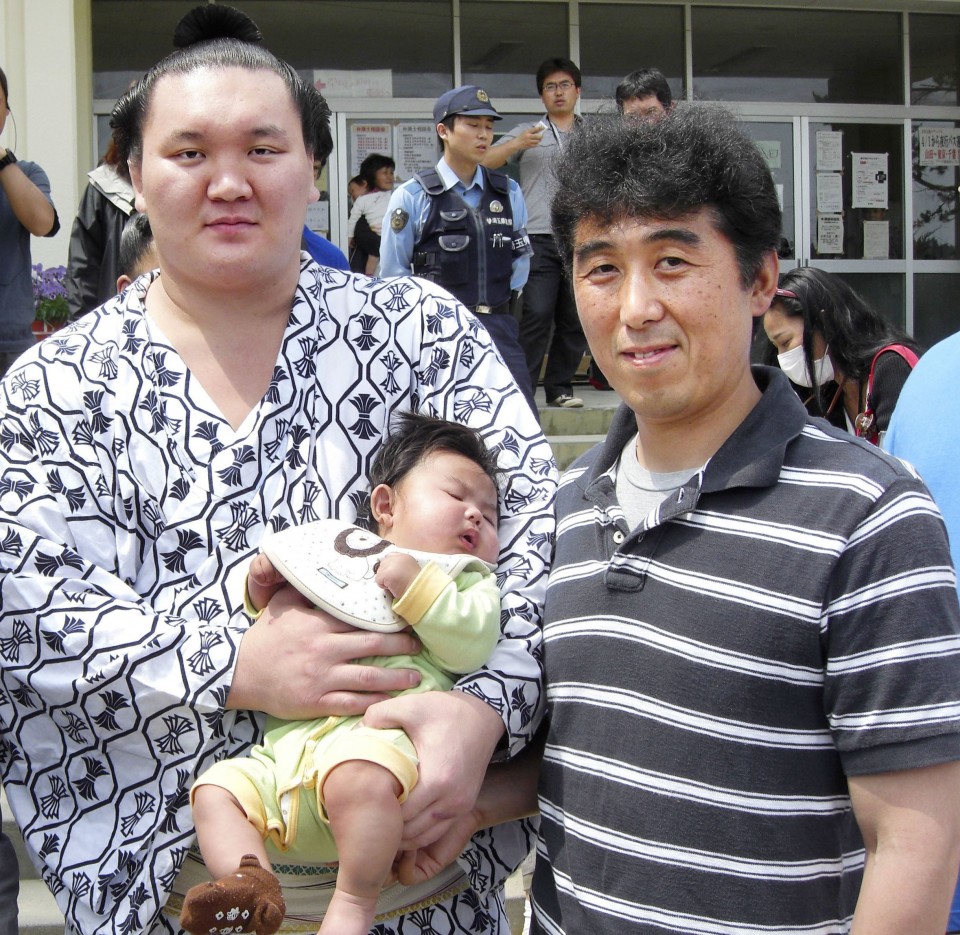 Yokozuna Hakuho (L) holds 3-month-old Shinji Sato in his arms as the child's father Tetsuya Sato stands next to him at a sumo event in Yamada, Iwate Prefecture, on June 4, 2011. (Photo courtesy of Tetsuya Sato)(Kyodo)

Because of the time he spent in the raised ring, Sato, who was 3,674 grams at the time of his birth but now weighs 35 kilograms, discovered early the charms of Japan's national sport.

"I love defeating large opponents. I'm glad we have the dohyo," the 10-year-old said.

Meanwhile, his father Tetsuya Sato, 50, has also enjoyed a journey into sumo and is now a coach to 11 students.

"If it were not for that dohyo, sumo would not have found its way back to this town. It's time for me to repay this debt of gratitude," he said.

The JSA continued to conduct visits every year until 2019 but was forced to temporarily halt its annual tour because of the coronavirus pandemic.

Sumo elder Oguruma has taken the lead in organizing the trip, and he prints the photos he takes at the sites of the 2011 tragedy to give to all association members who join the trip.

He says it is his way of paying tribute to the victims and showing that they will always remain in his heart.

"When wrestlers see the happiness on the victims' faces, it drives them to work harder. Sumo is supported by the people of the nation. We must not forget this," Oguruma said. 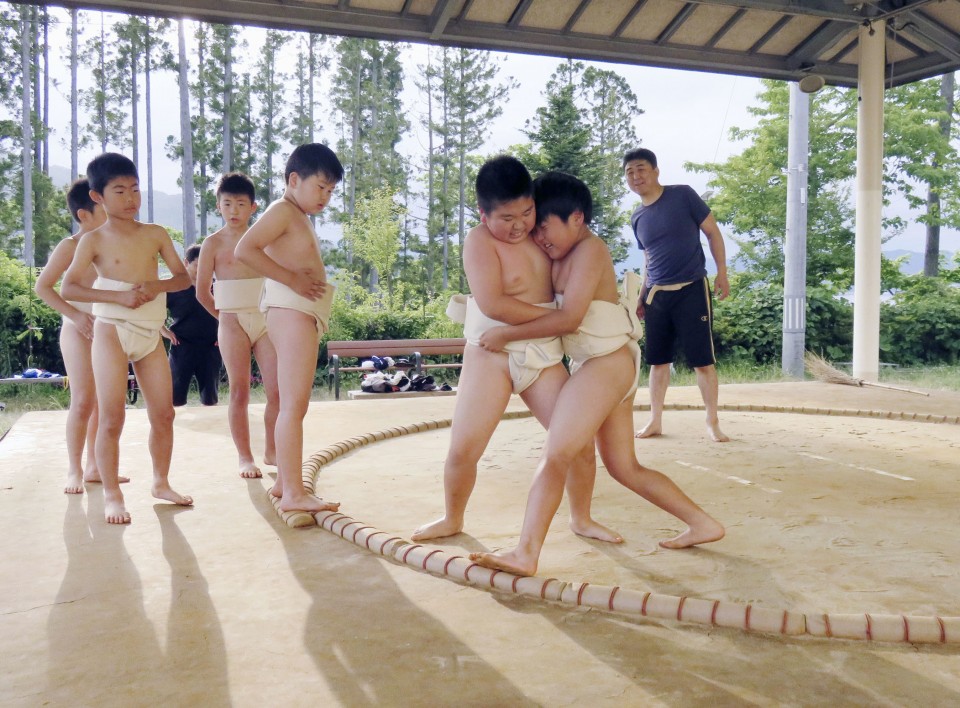 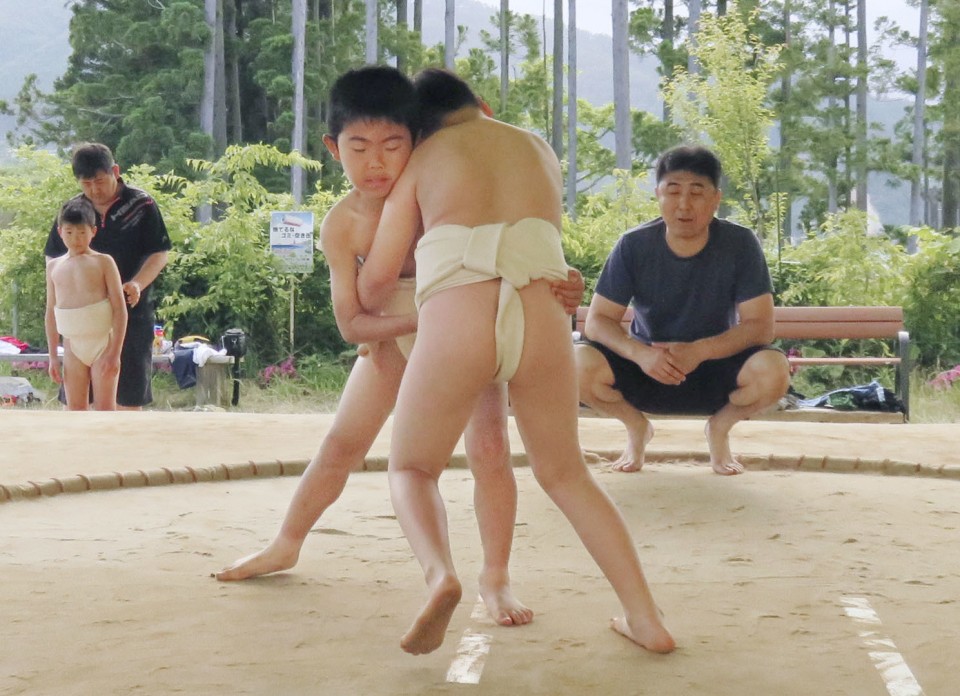