Japan and the United States plan to condemn North Korea's latest ballistic missile launches and urge its complete denuclearization in a joint statement to be issued by Prime Minister Yoshihide Suga and President Joe Biden at their summit next month, government sources said Friday.

The move aims to show Tokyo and Washington are in lockstep and apply pressure on Pyongyang as efforts to scrap its nuclear and missile programs remain deadlocked.

Suga and Biden are also expected to affirm the Senkaku Islands in the East China Sea fall under the scope of the Japan-U.S. security treaty, the sources said. The uninhabited islets are controlled by Japan but also claimed by China, and the move could further strain relations between Washington and Beijing. 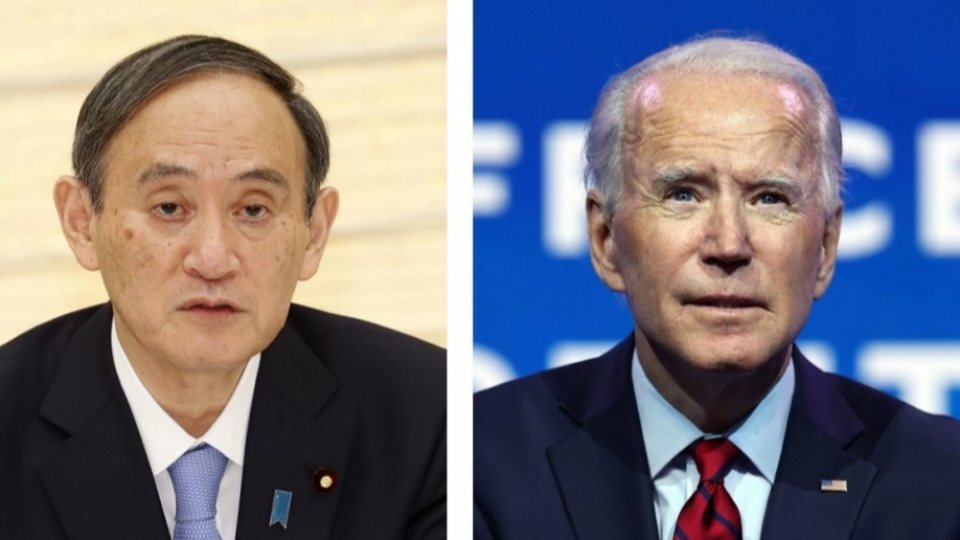 The launches, the first of their kind in a year, came as the Biden administration is conducting a review of its North Korea policy in consultation with allies Japan and South Korea after the summit diplomacy pursued by previous President Donald Trump failed in 2019.

Biden said in a press conference Thursday the United States will "respond accordingly" if Pyongyang decides to further escalate tensions.

According to the sources, Tokyo hopes to include in the joint statement a pledge for Washington to help in efforts to secure the return of Japanese nationals abducted by North Korean agents in the 1970s and 1980s.

Suga is arranging a three-day trip to Washington from April 8, and the meeting will be Biden's first with a foreign leader in person since taking office in January.

The distinction is "proof" of the importance the new administration places on Japan, a major U.S. ally hosting some 55,000 U.S. military personnel, the prime minister told a parliamentary session on Friday.

Suga said he plans to invite Biden to this summer's Tokyo Olympics, though a senior government official later said it was technically up to national Olympic and Paralympic committees to invite guests.

The leaders are expected to make clear Article 5 of the 1960 security treaty, which states the United States will defend territories under Japan's administration from armed attack, applies to the Senkakus.

China often sends ships near the islets, which it calls Diaoyu, despite Japan's protests, and is embroiled in a series of territorial disputes in the South China Sea. The joint statement could also mention the importance of peace and stability in the Taiwan Strait, the sources said.

The top diplomats and defense chiefs of Japan and the United States held talks in Tokyo this month and affirmed the Senkakus fall under the scope of the article, while voicing "serious concerns" over China's introduction of a law allowing its coast guard to fire on vessels intruding into what it considers its waters.

The joint statement by Suga and Biden is expected to include references to bolstering extended deterrence and advancing efforts to realize a "free and open Indo-Pacific" region, the sources said, adding it may also touch on cooperation with Australia and India, fellow members of the so-called Quad.

The leaders are also set to discuss ways to tackle climate change and improve economic security, including by securing supply chains for rare earths, of which China is a major exporter, and medical goods that have become key amid the COVID-19 pandemic.

Under Biden, the United States has ramped up criticism of China for human rights abuses against the Muslim Uyghur minority in the Xinjiang region and over its actions in Hong Kong and Taiwan, as well as cyberattacks and what it has called "economic coercion" of its allies.

"Each of these actions threaten the rules-based order that maintains global stability," Secretary of State Antony Blinken said in a meeting last week with Beijing's top diplomat, Yang Jiechi.

Yang, meanwhile, accused the United States of having a "Cold War mentality" and meddling in China's internal affairs.