Myanmar people on Sunday mourned the deaths of at least 114 people who were killed by security forces the previous day in the bloodiest violence since the military seized power in a coup in February, according to local media.

The death toll from the crackdowns on anti-coup protests had reached 423 as of Saturday, according to a daily tally released Sunday by the Assistance Association for Political Prisoners, a rights group monitoring the situation in the country. 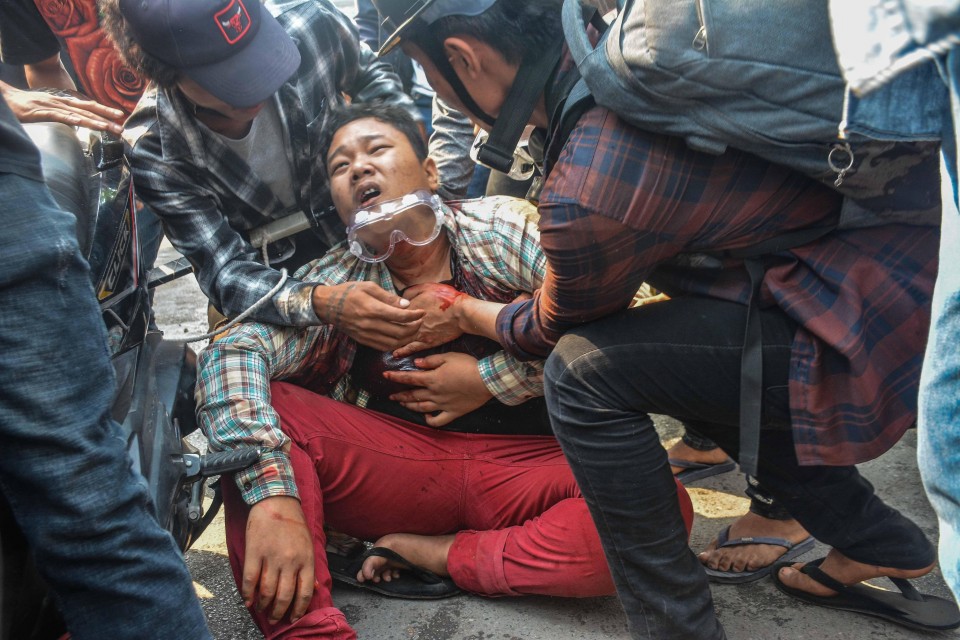 A wounded protester is seen after security forces intervene in protesters during a protest against military coup and detention of elected government members in Mandalay, Myanmar on March 27, 2021. (Anadolu Agency/Getty/Kyodo)

Saturday's violence drew condemnation from the top defense chiefs of the United States and its allies including Japan, who said in a joint statement that a "professional military follows international standards for conduct and is responsible for protecting -- not harming -- the people it serves."

Japanese Foreign Minister Toshimitsu Motegi separately condemned the continued use of deadly force by Myanmar's military and police against civilians. So did the South Korean Foreign Ministry, which issued a statement through a spokesperson.

The online media Myanmar Now reported that at least 114 people, including a 13-year-old girl, were killed on the country's Armed Forces Day on Saturday. The military had warned that anyone attempting to interfere in the day's events was "at risk of being shot in the head."

In the country's second-largest city Mandalay on Sunday, those who attended the funeral of a 24-year-old man killed the previous day made a three-finger salute to mourn their loss.

The gesture has come to symbolize protesters' resistance to dictatorship.

In Monywa in central Myanmar on Sunday, people marched on streets calling for the restoration of a civilian government, according to U.S. government-funded international broadcaster Radio Free Asia.

Also visible there were the flags of the National League for Democracy, the party led by detained leader Aung San Suu Kyi that was ousted in the Feb. 1 coup.

According to Myanmar Now, security forces threw a 40-year-old resident into burning tires and killed him in Mandalay on Saturday night. The report quoted witnesses as saying that he had been seriously injured after being shot by the security forces.

The tires had been put on a street by residents as a barricade. After the security forces set fire to it, the man was trying to put it out, the report said. He left four children behind, it added.

The online media also reported that 40 people were killed in the Mandalay region on Saturday, while a 1-year-old was seriously injured in the largest city Yangon after being hit in the eye by a rubber bullet.

The Committee Representing Pyidaungsu Hluttaw -- a group organized by mostly NLD members as a provisional government to rival the military government in power -- issued a statement condemning the violence.

The military and "its armed henchmen have acted in fascist tyrannical ways and ruthlessly executed the citizens of Myanmar across the whole country," it said.

A day after more than 100 protesters were killed by Myanmar's security forces, Motegi issued a statement saying that the Japanese government "strongly condemns" such action continuing despite repeated calls from the international community to immediately stop resorting to violence against civilians.

"Shooting against civilians, the inhumane treatment of detainees, and the strict crackdown on media activities by the Myanmar military and police are actions that contradict what the Myanmar military officially announced about the importance of democracy," Motegi said.

Armed Forces Day marks the date in 1945 when Gen. Aung San, Suu Kyi's father, began the resistance against the Japanese occupying forces during World War II and is considered the most important event for the military to showcase its prowess.

The coup has set off a wave of protests across the country that security forces have sought to quell using deadly force. The outside world has found few effective means to rein in the indiscriminate violence against citizens.