FOCUS: No breakthrough in U.S.-China talks may hurt Sino-Japan ties

No breakthrough in two-day talks between U.S. and Chinese top diplomats in Alaska through Friday may herald a deterioration in Sino-Japanese relations, which have apparently improved for the past couple of years.

The first high-level in-person meeting since the change in U.S. administration in January underscored the two major powers have been deeply divided over human rights and security issues, sparking speculation that a "new Cold War" would escalate ahead.

As democratic forces centered on the United States are likely to be decoupled further from those intimate with Communist-led China, Japan, one of the closest U.S. allies, would face a dilemma on how to get along with its big, crucial neighbor.

Some diplomatic sources in Beijing warn that the leadership of President Xi Jinping has already become more vigilant against Tokyo's political proximity to Washington with an eye on curbing Chinese clout in the Asia-Pacific region.

Recent moves by the Japanese government of Prime Minister Yoshihide Suga "seem to lack consideration for China," a diplomatic source from a Southeast Asian nation said.

Her remarks came as Japanese foreign and defense ministers, along with U.S. counterparts, voiced opposition at their two-plus-two security gathering on Tuesday in Tokyo to any unilateral action by China that seeks to change the status quo.

For years, Beijing has extended an olive branch to Tokyo as its tensions with Washington have shown few signs of easing soon. Japan's overembracement of U.S. strategic goals would not bring about good results in the region, she said.

"Of course, Japan's alliance with the United States is the cornerstone of the country's diplomacy and security...their cooperation should also be maintained for peace and stability in the region," the source said.

The source said, however, now is not the best timing for Japan to cozy up to the United States because it would "absolutely irritate" Beijing and prompt the Communist Party to "step up provocations in the nearby disputed waters, which would make the regional situation extremely fragile," she said.

"We hope Suga's government will map out a well-balanced diplomatic strategy that would not harm its ties with mainland China while building credibility with the new U.S. administration" of President Joe Biden, she added. 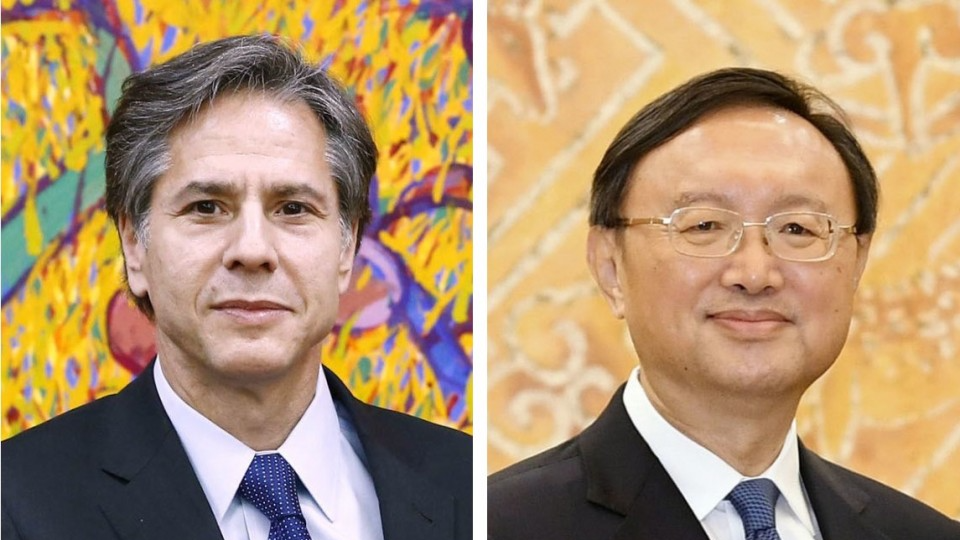 On Friday, U.S. Secretary of State Antony Blinken and China's top diplomat, Yang Jiechi, acknowledged that they had "candid" discussions during their two-day meeting, but they failed to make significant progress in improving bilateral relations.

Although Yang summed up the dialogue as "candid, constructive and helpful," he said that there were "still some important differences between the two sides," according to China's state-run Xinhua News Agency.

It was rare for a joint statement by the two nations to single out China, a sign that Tokyo and Washington have raised their alert level over the threat the Communist Party poses militarily and economically as well as its violations of human rights.

Japan "willingly stoops to acting as a strategic vassal of the United States, going so far as to break faith, harm relations with China, invite the wolf into the house, and betray the collective interests of the whole region," Zhao said.

The Global Times, a tabloid affiliated with the Communist Party, also said in its editorial, "The rhetoric of this U.S.-Japan joint press statement is the toughest in comparison to their prior ones."

"By caving in to Washington's stance on China, Japan is handing a new endorsement to the new U.S. administration. That would undermine Beijing's trust in Tokyo's consistency in improving relations with China," the newspaper said.

In February, meanwhile, China enforced a controversial bill allowing its coast guard to use weapons when foreign ships involved in illegal activities in waters it claims do not obey orders.

Given that Beijing claims that the Senkaku Islands, administered by Tokyo, in the East China Sea are part of its territory, the legislation could target Japanese vessels navigating around the uninhabited islets called Diaoyu in China.

As Chinese coast guard ships have repeatedly entered the waters near the Senkakus, it is "highly probable" for Beijing to "take more provocative actions" there once it sees Tokyo as an "enemy" of the Communist Party, a Japanese government source said.

"We expected that China would react harshly to the two-plus-two joint statement, but China has done bad things so we had no choice. We may be unable to improve Japan-China relations anymore for the time being," the source said.

Japan's ambassador to China, Hideo Tarumi, told reporters on Thursday that the two nations are "neighbors and therefore it's natural for them to have conflicts and friction with each other."

"The key is to resolve problems through dialogue," Tarumi added.

No breakthrough seen in 1st U.S.-China high-level talks under Biden