Ryuho Kikuchi struck late to salvage a 1-1 draw Saturday for Vissel Kobe against Tokushima Vortis, who have yet to notch up their first win following promotion back to the J-League first division.

The hosts were poised for victory thanks to a superb 75th-minute goal from Yuki Kakita at Pocari Sweat Stadium, but Kikuchi spoiled the party with just three minutes left in regulation.

The equalizer was the first career J1 goal for the 24-year-old center-back, who joined Kobe from second-division Renofa Yamaguchi last year. 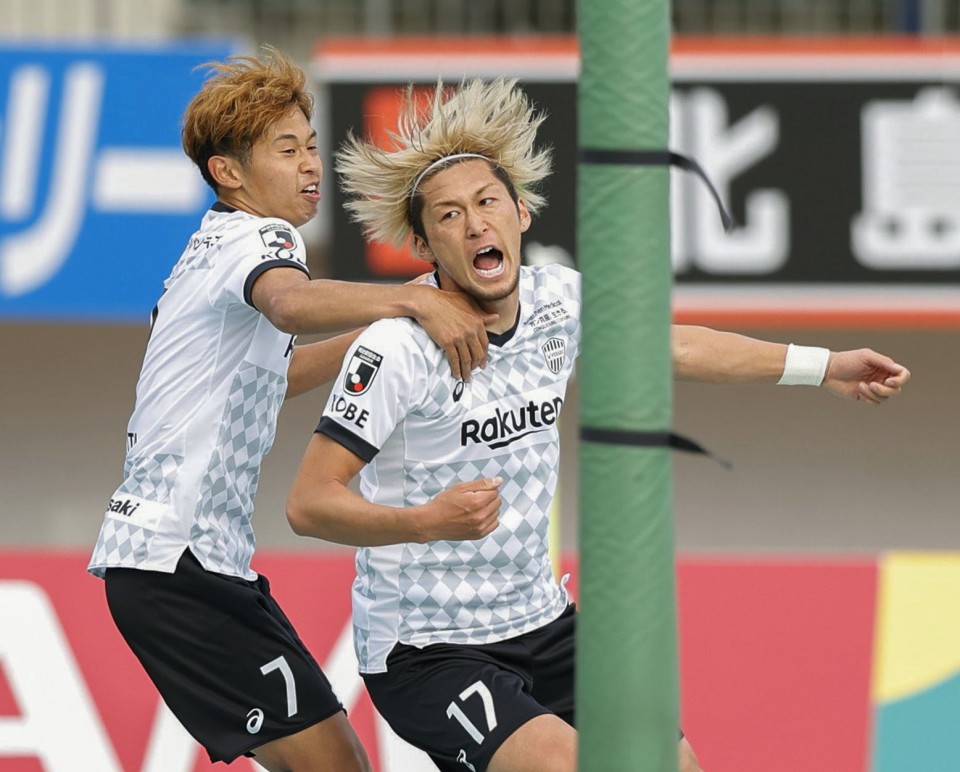 Ryuho Kikuchi (17) is congratulated by Yuta Goke (7) after striking a late equalizer to salvage a 1-1 draw for Vissel Kobe away to Tokushima Vortis in the J-League first division on March 6, 2021. (Kyodo)

After the Tokushima defense failed to clear a corner kick, goalkeeper Naoto Kamifukumoto parried a Kyogo Furuhashi shot straight into the path of Kikuchi, who netted from directly in front.

"(The ball) fell to me in a good position, and I didn't miss," said Kikuchi, who was more concerned by his team's shortcomings at the other end of the pitch.

"We came here aiming for a clean sheet, so it's really no good that we failed on that front."

With Spanish manager Dani Poyatos kept out of the country by travel restrictions aimed at stopping the coronavirus, head coach Takeshi Komoto called the shots for Tokushima, who looked to turn their limited possession into quick counterattacks.

Forward Taisei Miyashiro helped set up their goal by making a storming run into the box and finding strike partner Kakita with a deflected pass. The 19-year-old Kakita, on loan from Kashima Antlers, threw off the defense with a feint before finishing from a tight angle. 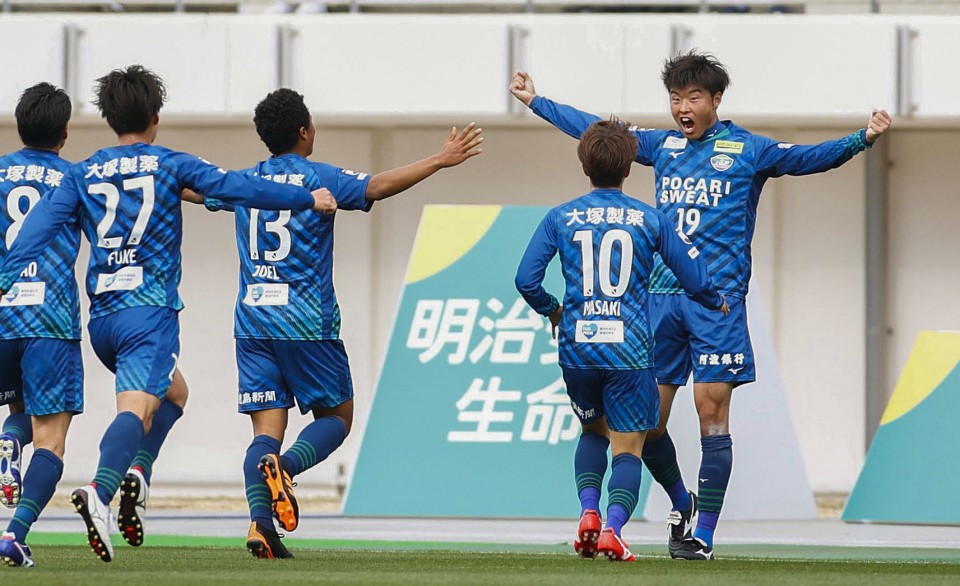 Yuki Kakita (19) celebrates with his teammates after scoring the opening goal for Tokushima Vortis in their 1-1 draw at home to Vissel Kobe in the J-League first division on March 6, 2021. (Kyodo)

Furuhashi missed a chance to steal the match for Atsuhiro Miura's men in the dying minutes, shooting over the bar after the ball fell to him in front of goal.

Kobe are still waiting for the return of captain and star playmaker Andres Iniesta from a thigh injury sustained during the Asian Champions League in December. The 36-year-old former Barcelona great was expected to be out around four months following surgery.

In other J1 action, Masato Morishige struck the winner in injury time as FC Tokyo came back to beat Cerezo Osaka 3-2 at Ajinomoto Stadium.

The J1's all-time top scorer, Yoshito Okubo, continued his remarkable return to the top flight by scoring the opener for Cerezo, bringing his tally to four goals in three league games.

The 38-year-old former Japan striker joined Cerezo from second-division Tokyo Verdy at the start of the year.

Promoted Avispa Fukuoka snared a 2-2 draw away to Shimizu S-Pulse thanks to an injury-time equalizer from Swedish defender Emil Salamonsson.

Hiroto Goya scored a goal in each half to lead Kashiwa Reysol to a 2-1 win over visiting Shonan Bellmare, while Yuki Soma's late strike saw Nagoya Grampus claim a 1-0 victory over Consadole Sapporo at Toyota Stadium.