Japan's lower house approved Tuesday a 106.61 trillion yen ($1 trillion) draft budget for fiscal 2021, its largest ever as the need for spending on coronavirus countermeasures comes on top of already huge welfare and defense costs.

Following passage by the House of Representatives, the initial general-account budget moves to the House of Councillors for deliberations and is set to be enacted before the new business year starts on April 1. 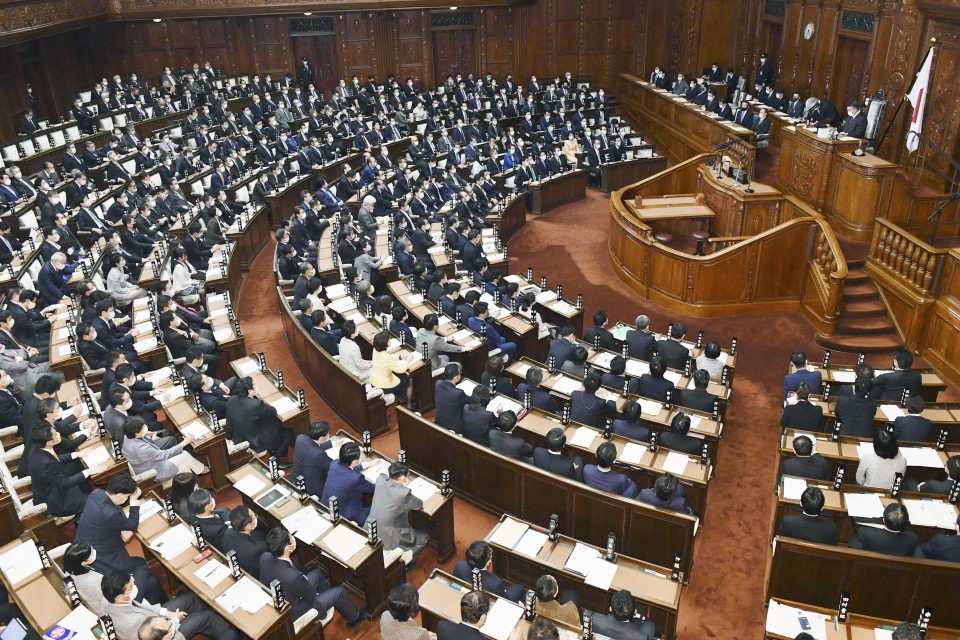 Japan's House of Representatives holds a plenary session in Tokyo on March 2, 2021, where a largest-ever 106.61 trillion yen ($1 trillion) draft budget was passed for fiscal 2021, as the need for spending on coronavirus countermeasures comes on top of already huge welfare and defense costs. (Kyodo) ==Kyodo

It is the ninth consecutive year that the government has compiled a record initial budget and the third straight year that the amount has topped 100 trillion yen. The outlays and related debt issuances are set to further worsen Japan's fiscal health, the worst among major developed countries.

Over a third of the budget, or a record 35.84 trillion yen, will be spent on social security services for Japan's rapidly aging population.

Defense spending totaled 5.34 trillion yen, hitting a record high for the seventh year in a row, as Japan seeks to beef up its capabilities in new domains such as cyberspace and outer space.

The outlays for national security include 33.5 billion yen for the development of Japan-made standoff missiles capable of attacking enemy vessels from outside their firing range, in a bid to counter China's growing maritime assertiveness.

The budget will also help finance steps to mitigate the economic fallout from the pandemic, which has weighed on household spending and left many firms struggling to maintain payrolls despite falling earnings.

The government separately set aside 5 trillion yen in reserve funds that will likely be spent on future responses to the health crisis and any subsequent economic downturn. The funds can be spent without further Diet approval.

New bond issuances to finance the budget will total 43.60 trillion yen, increasing the debt dependency ratio to 40.9 percent from 31.7 percent under the initial budget for fiscal 2020.

The outstanding balance of state and local government debt in Japan exceeded 1,100 trillion yen, or well over 200 percent of gross domestic product, at the end of fiscal 2019.