China's Foreign Minister Wang Yi said Sunday that the nation's controversial new law allowing its coast guard to use weapons in waters it claims does "not target any specific country," while voicing hope for further improvement in relations with Japan.

As China claims that the Japanese-administered Senkaku Islands in the East China Sea are part of its territory, concern is mounting in Tokyo that the legislation would target Japanese vessels navigating around the uninhabited islets called Diaoyu in China. 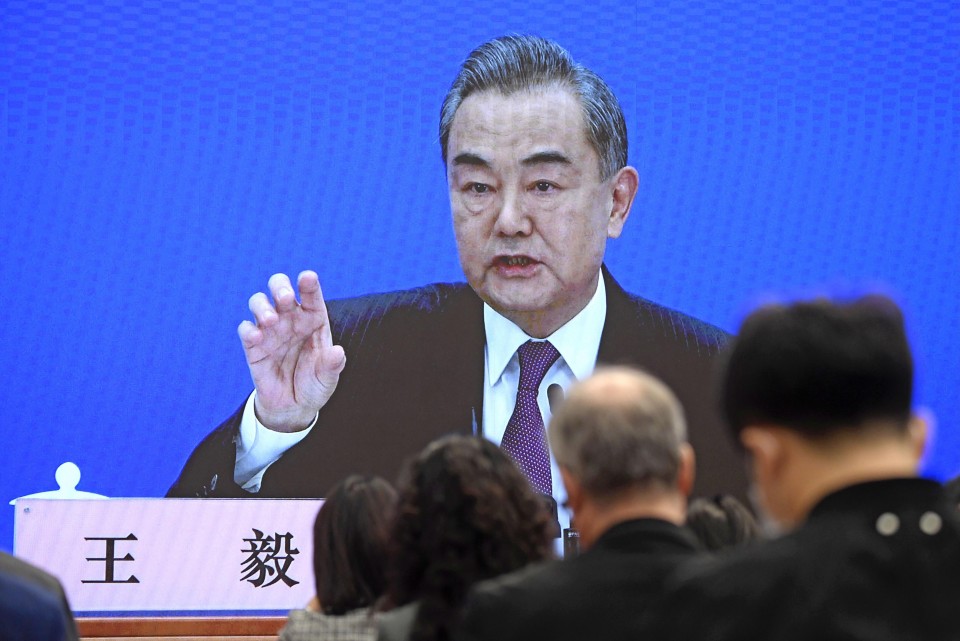 At a press conference on the sidelines of this year's annual session of the National People's Congress, China's parliament, Wang said the latest legislation is "in accordance with international law and practice."

"China and Japan can always engage in dialogue and communication to enhance understanding and build trust," said Wang, who is also a state councilor.

Asked about how the two Asian nations can cooperate, Wang said China and Japan have "every reason to support each other" for the success of the Tokyo Olympics, which has been put off by one year to July, and the Beijing Winter Games in February 2022.

The sports events "will become a platform for deepening the friendship between the peoples of the two countries and provide an opportunity to promote the development of China-Japan relations," Wang said.

But the foreign minister was mum about whether Beijing and Tokyo have been preparing for Chinese President Xi Jinping's first state visit to Japan since he became president in 2013. The planned trip has been delayed from April last year amid the virus outbreak.

The enforcement of the coast guard law in February has raised alarm in Tokyo over the disputed islands while Chinese coast guard vessels repeatedly entered the nearby waters.

Earlier this month, Japanese government officials said that under the interpretation of existing laws, the country's coast guard could fire on foreign official vessels to quell resistance from them if they forcibly land on the islets.

Sino-Japanese relations have often been frayed by the territorial issue.

Beijing, however, is believed to be extending an olive branch to Tokyo, a close ally of Washington, for the time being, as its ties with the United States have shown little sign of improving soon under President Joe Biden who took office in January.

At the press conference on Sunday, Wang accused the United States of interfering in the affairs of other nations and creating troubles in the world, calling on Washington to lift "unreasonable restrictions" on Beijing.

The Chinese Communist-led government has been at odds with the United States over several matters such as trade, state-of-the-art technology and Taiwan as well as its alleged human rights abuses in regions including Hong Kong, Tibet and Xinjiang.

Former U.S. President Donald Trump slapped sanctions on Beijing in response to the Hong Kong, Tibet and Xinjiang issues, while levying additional tariffs on imports of a large number of Chinese products.

"For a long time, the United States has arbitrarily meddled in the internal affairs of other countries under the banner of so-called democracy and human rights and has caused many troubles in the world," Wang said.

Nevertheless, Wang said that China and the United States can work together to tackle the novel coronavirus pandemic and climate change, indicating Beijing's willingness to ease intensifying tensions with Washington.

As for Hong Kong, Wang said it is necessary to reform the electoral system of China's special administrative region for its long-term stability, claiming that the move will bring a "bright future" to the territory.

China on Thursday pledged to review the electoral system in Hong Kong, probably dealing a crushing blow to the aspirations among many Hong Kong residents for democracy, freedom and human rights there.

At the National People's Congress last year, China passed a resolution to introduce a security law to crack down on what Beijing views as subversive activity in Hong Kong. The legislation was enacted in late June and imposed on the territory immediately.

Under China's "one country, two systems" policy, the former British colony was promised it would enjoy the rights and freedoms of a semiautonomous region for 50 years following its return to Chinese rule in 1997.

Xi's leadership began taking stern actions against Hong Kong after large-scale protests sparked by a controversial extradition bill morphed into a pro-democracy movement in the territory in 2019.

This year's session of the National People's Congress is scheduled to be held for seven days through Thursday.