U.S. Defense Secretary Lloyd Austin and Secretary of State Antony Blinken on Wednesday reaffirmed in talks with their direct South Korean counterparts the joint goal of achieving complete denuclearization of the Korean peninsula, highlighting the importance of maintaining the ironclad alliance the two countries share.

Austin and Blinken arrived in South Korea earlier in the day, embarking on a two-day visit to their country's key ally in the Northeast Asia region. They each held their first in-person talks with South Korean Defense Minister Suh Wook and Foreign Minister Chung Eui Yong. 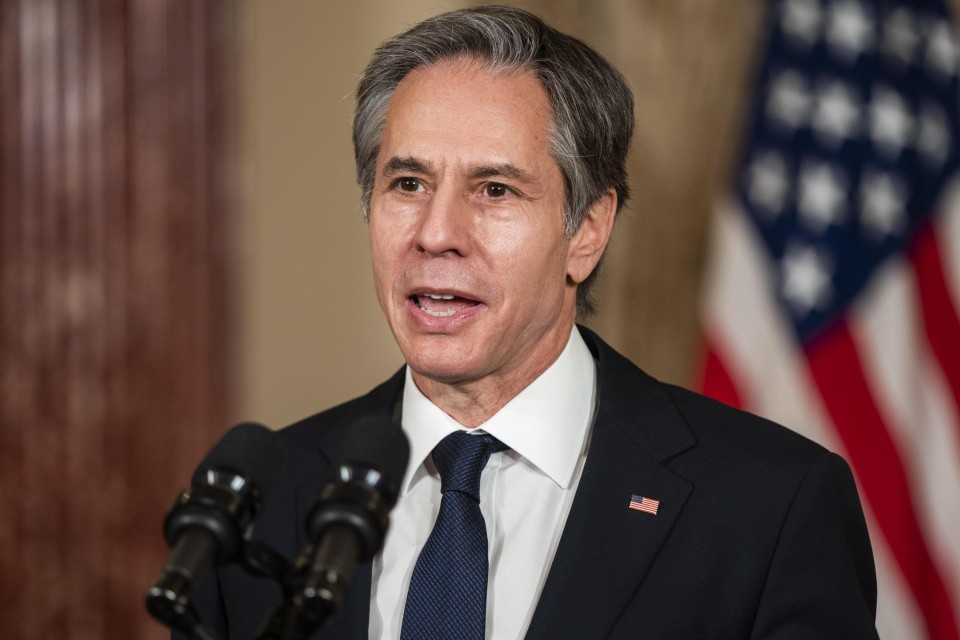 U.S. Secretary of State Antony Blinken is pictured in Washington in February 2021. (UPI/Kyodo)

"Minister Suh Wook and Minister Austin reassured complete denuclearization and a permanent peace settlement on the Korean Peninsula as South Korea and the United States' joint goal," said South Korea's Defense Ministry in a statement released after the talks ended.

The statement also showed that the two ministers also agreed on the importance of a rules-based international order, stressing the need for security cooperation among South Korea, the United States, and Japan.

"The two ministers also shared thoughts that security cooperation among South Korea, the United States, and Japan is crucial in responding to threats from North Korea's nuclear arms and missiles, and forming a cooperative Northeast Asia defense system," the ministry said.

South Korea's Foreign Ministry also released a statement upon Blinken and Chung's talks, saying that they reaffirmed the two countries' strong alliance as a linchpin to peace, security, and prosperity for Northeast Asia, the Indo-Pacific region and the world.

"The two ministers especially agreed to continue coordination to hold a South Korea-U.S. leaders' summit as soon as possible," the statement said.

Blinken and Austin's first in-person South Korea visit comes after a CNN report that U.S. intelligence has assessed that North Korea could be preparing to carry out its first weapons test since President Joe Biden took office in January.

It also comes a day after North Korean media said Kim Yo Jong, leader Kim Jong Un's younger sister and close aide, had lambasted ongoing U.S.-South Korea joint military exercises and criticized the Biden administration for wanting to spread the "smell of gunpowder from across the ocean."

The U.S. pair's trip to South Korea follows a three-day visit to Japan, where they and their Japanese counterparts reaffirmed their commitment to the denuclearization of North Korea and urged Pyongyang to abide by its obligations under U.N. Security Council resolutions.

"Given the unprecedented challenges posed by both the Democratic People's Republic of Korea and China, the U.S.-ROK alliance has never been more important," Austin said at the outset of the talks with Suh on Wednesday while stressing that the United States' commitment to the alliance with South Korea, which has been steadfast for 70 years, remains ironclad.

Suh, in response, expressed gratitude for Austin's early visit, and said "nothing is more important than upholding combined readiness and deterrent power against North Korea during the process of improving the South Korea-U.S. alliance."

Blinken, speaking at the beginning of his talks with Chung, also acknowledged that North Korea's nuclear and ballistic missiles programs are shared challenges between Washington and Seoul, while saying that his country "will continue to work together with South Korea and other allies and partners, including Japan, toward the denuclearization of the DPRK," referring to the Democratic People's Republic of Korea, the official name of North Korea.

The U.S. official highlighted the values of democracy, harshly criticizing North Korea's authoritarian regime for abusing its people. He also took aim at China, blasting it for eroding autonomy in Hong Kong, its posturing over Taiwan and asserting maritime claims in the South China Sea.

The two countries' foreign and defense ministers are set to meet together Thursday for their first two-plus-two meeting in over four years.

Blinken told reporters in Tokyo that the Biden administration is currently conducting, in consultation with Japan and South Korea, a "thorough" review of U.S. policy toward North Korea that is expected to be completed in "the coming weeks."

The U.S. secretaries of state and defense last visited South Korea at the same time in 2010.

Negotiations on how much of the costs of hosting U.S. troops South Korea should shoulder had dragged on under the administration of former U.S. President Donald Trump, which reportedly demanded a sharp increase in Seoul's contribution.

But South Korea said on March 10 it had agreed with the United States to increase its share of costs by 13.9 percent this year from 2019 under a multiyear deal.