Japanese duo Ritsu Doan and Masaya Okugawa struck a goal each Sunday to lead Arminia Bielefeld to a vital 2-1 win against Bayer Leverkusen in the Bundesliga.

The victory at Leverkusen's Bay Arena pulled Arminia out of the bottom three and up to 15th place as they battle to avoid relegation from the German top flight.

Top-four hopefuls Leverkusen enjoyed the early run of play, but Doan made the visitors' first opportunity count in the 17th minute when he slid past defender Edmond Tapsoba to turn Christian Gebauer's low cross in off the underside of the crossbar.

The goal was the fourth of an impressive maiden Bundesliga season for the 22-year-old Samurai Blue winger, and his first away from home. 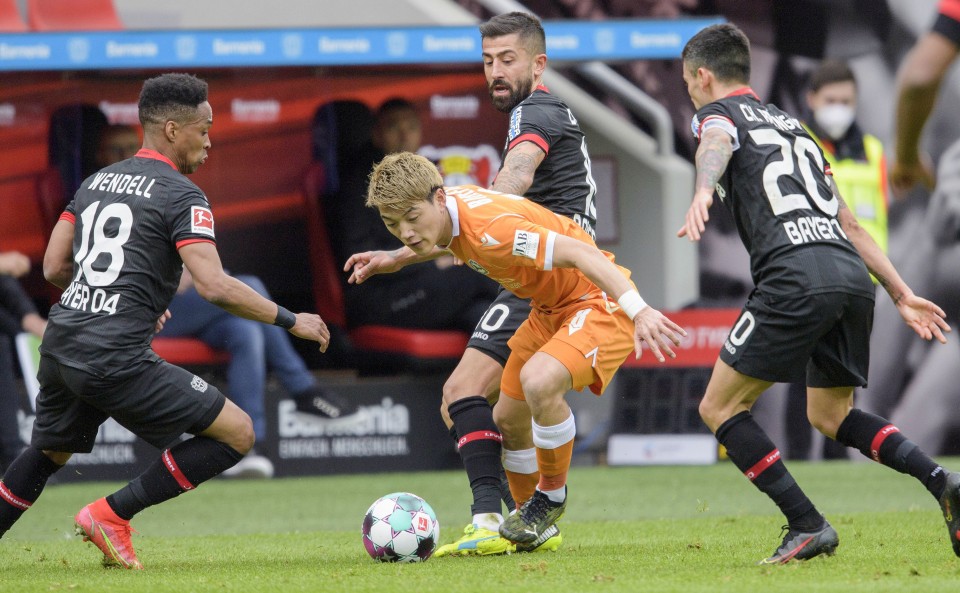 Japanese winger Ritsu Doan (C) of Arminia Bielefeld competes for the ball during a  German Bundesliga match against Bayer Leverkusen at Bay Arena in Leverkusen, Germany, on March 14, 2021. (Kyodo)

Okugawa produced a classy finish 12 minutes after the break to register his first goal since arriving on loan from Austrian champions Red Bull Salzburg in the winter transfer window.

Making his second start for Frank Kramer's side, the 24-year-old midfielder received the ball on a breakaway from Anderson Lucoqui and calmly stroked it past Leverkusen keeper Lennart Grill from the middle of the area.

It was only the second time two Japanese players had scored for one team in the same Bundesliga match. Hiroki Sakai and Hiroshi Kiyotake achieved the feat for Hannover against Ingolstadt in 2016.

Czech forward Patrik Schick pulled a goal back for Leverkusen with five minutes left in regulation, but Arminia were able to hold on and claim three important points. 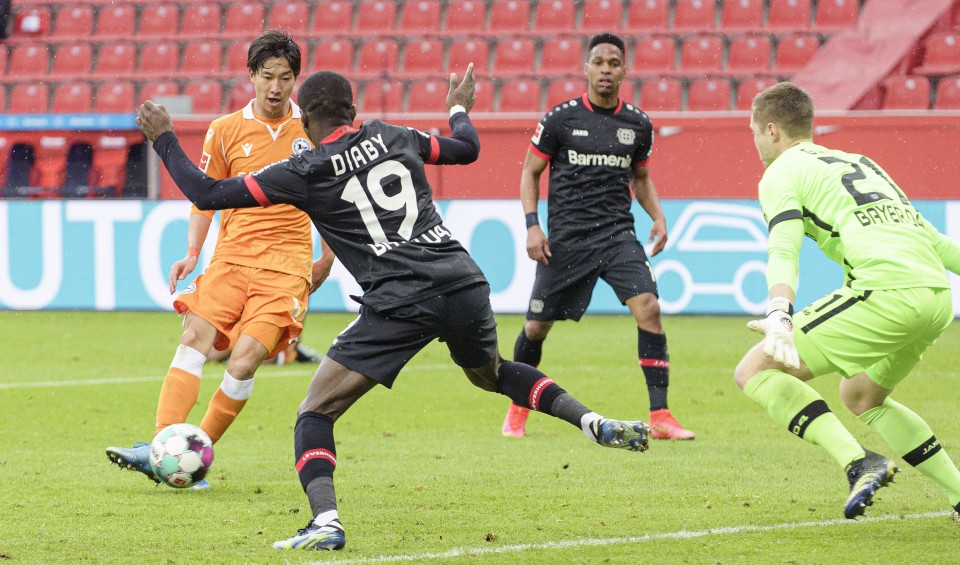 Masaya Okugawa (far L) shoots to score for Arminia Bielefeld in their 2-1 win against Bayer Leverkusen in the Bundesliga on March 14, 2021. (Kyodo)

Doan said the hard-fought win over a side contending for Champions League qualification was just reward for Arminia, who appointed Kramer earlier this month after sacking former manager Uwe Neuhaus.

"It was a very tough game for us, but we deserved the three points because we worked very hard against Leverkusen, (who are) a big club," Doan said.

In other Bundesliga action, Japan attacker Daichi Kamada was on target for Eintracht Frankfurt, netting the equalizer in a 1-1 draw away to Red Bull Leipzig.

The draw strengthened fourth-place Frankfurt's bid for a Champions League berth while denting the title hopes of Leipzig, who trail leaders Bayern Munich by four points.

Emil Forsberg gave Leipzig the lead in the 46th minute at Red Bull Arena, but Kamada leveled the scores 15 minutes later, latching onto a deflected cross from Andre Silva and steering home his fourth goal of the campaign.