The organizers of this summer's Tokyo Olympics and Paralympics will most likely not allow overseas spectators to attend the mega sporting event, as global efforts to curb the spread of the novel coronavirus are taking longer than initially anticipated, officials with knowledge of the planning said Friday.

The heads of the organizing bodies of the Summer Games are expected to hold a virtual meeting in mid-March to make a decision on the issue, said the officials, who spoke on condition of anonymity. But one of them said, "Practically, the course has already been set." 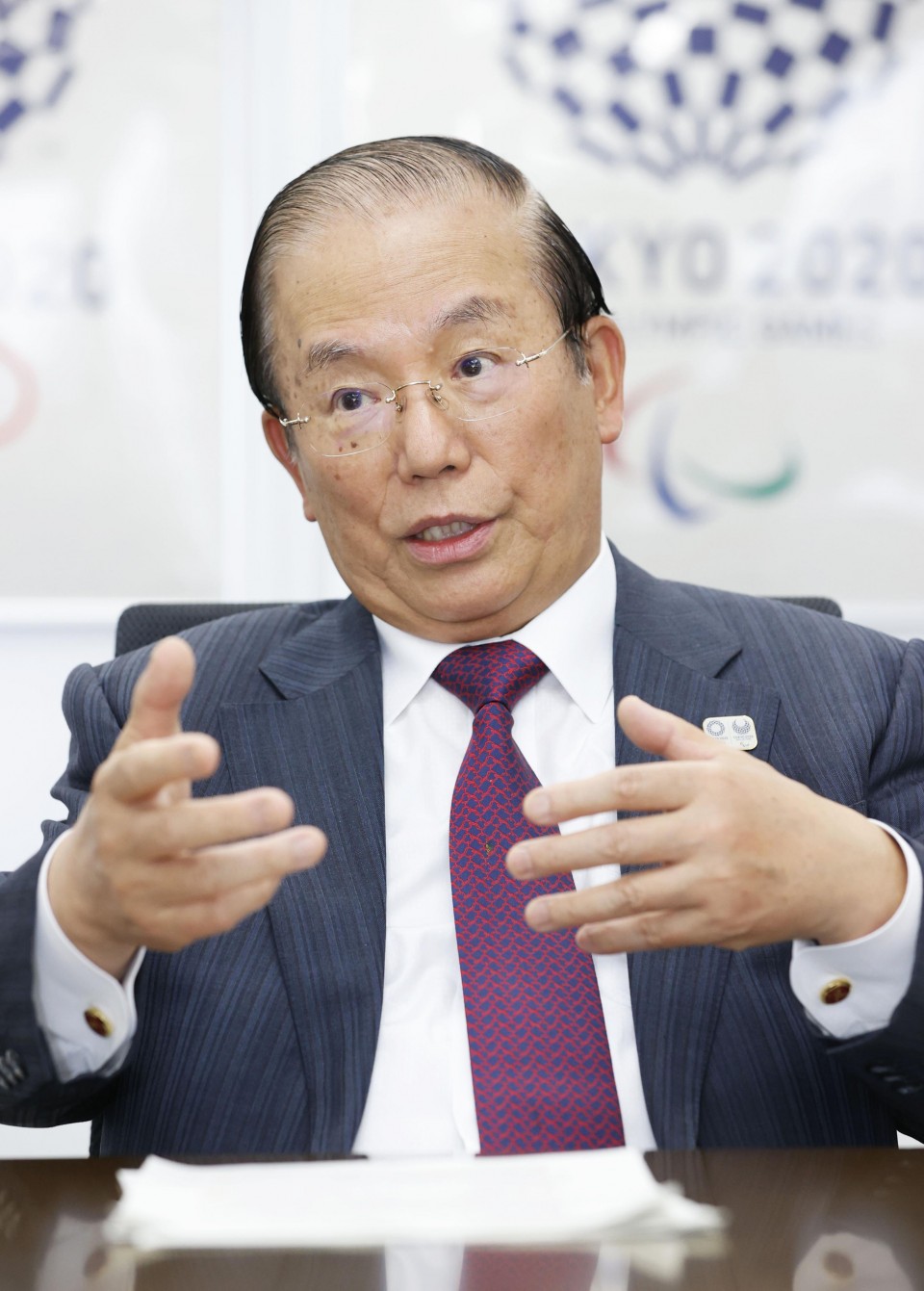 Toshiro Muto, CEO of the Tokyo Olympic and Paralympic organizing committee, speaks in an interview in Tokyo on March 5, 2021. (Kyodo)

The chief of the Japanese organizing committee also hinted at the difficulty of welcoming Olympic fans from abroad in a press conference on Friday.

"We would really like people from around the world to come to the full stadium, but unless we are prepared to accept them and the medical situation in Japan is perfect, it will cause a great deal of trouble also to visitors from overseas," said Seiko Hashimoto, president of the Tokyo Olympic and Paralympic organizing committee.

Whether to let fans from abroad be in the stands at each venue is one of the most difficult decisions the organizing committee has to make in the coming days, while public support for the games remains low in Japan amid lingering concern over a rebound in infections driven by coronavirus variants.

Toshiro Muto, CEO of the committee, also echoed such a view in an interview with Kyodo News, hours before Prime Minister Yoshihide Suga extended the COVID-19 state of emergency covering the Tokyo metropolitan area to March 21, two weeks beyond its previously scheduled end.

"Japan does not allow people from overseas to enter the country at the moment. They will be allowed once the situation improves, but I think it is not easy for the situation to improve to the point that we can welcome them with ease," he said.

Earlier this week, the five organizers of the games, including the local committee and the International Olympic Committee, agreed to decide on what to do with overseas spectators by the end of March.

Hashimoto has said the organizers, also including the International Paralympic Committee, the Tokyo metropolitan government and the Japanese government, have to make a final decision on the issue by March 25, when the Japanese leg of the torch relay begins.

The organizers will then make a call in April on the number of spectators to be allowed into the venues.

Muto expressed optimism that the situation will likely improve by then but said the Japanese committee has not ruled out the possibility of staging events behind closed doors.

The Japanese capital and surrounding prefectures have been under the state of emergency since Suga declared the measure on Jan. 7, when the areas confirmed a total of about 4,000 cases of infections.

The emergency, which asks residents to stay at home as much as possible and restaurants to close by 8 p.m., was originally scheduled to be lifted in early February.

Still, Muto said there is not even a remote chance of another postponement of the Olympics and a cancelation is not on the table.

"There are people who say the games should be postponed, but from my view, pushing them back is impossible," he said. "Holding them in July is the latest option."

Hashimoto, meanwhile, said at the press conference it is essential to dispel health worries among the Japanese public.

"(People) may think we are forcing to hold the games no matter what, but that is not true," said the seven-time Olympian who took the helm of the committee about two weeks ago after her predecessor Yoshiro Mori sparked an uproar over sexist remarks.

Muto specified three main reasons why pushing back the Olympics until 2022 is not an option, saying athletes will not be able to train under pressure for an extra year and it is hardly possible that the organizing committee will win support for the idea from the international community.

He also said the Japanese organizers cannot secure the athletes' village in the Harumi waterfront district for another year as real estate companies need to sell the housing units there after they are renovated.

According to a Kyodo News survey conducted last month, 47.1 percent of respondents wanted the Olympics and Paralympics to be postponed again, while 35.2 percent said they should be canceled. Only 14.5 percent wanted the games to be held as currently scheduled.

"In regards to coronavirus countermeasures, we need to inform the public to the level that people think 'are they doing this much?' Unfortunately, we have not fulfilled that 100 percent. So I think it is something we need to work on," Muto said.