Tokyo and nearby prefectures decided Wednesday to extend their requests for businesses to shorten operating hours until next month as part of efforts to curb the risk of a rebound of the novel coronavirus in the metropolitan area.

Tokyo Gov. Yuriko Koike and the governors of Chiba, Kanagawa and Saitama prefectures agreed in an online meeting to continue asking establishments such as restaurants to close by 9 p.m. until April 21, while vowing to work together to stem the resurgence of infections. 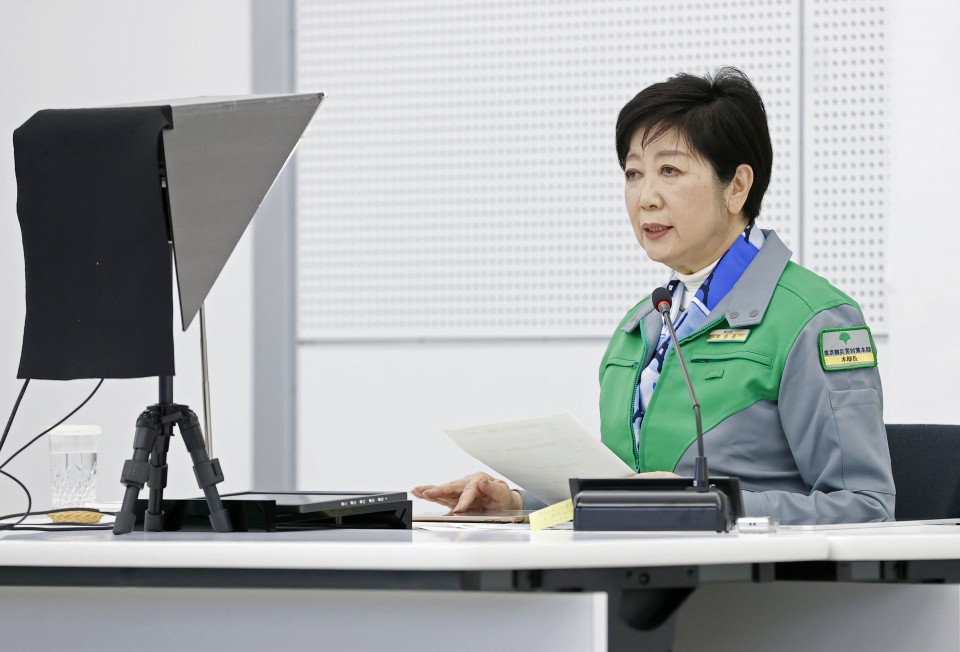 Tokyo Gov. Yuriko Koike attends an online meeting to discuss the novel coronavirus measures with her counterparts in three nearby prefectures on March 24, 2021.(Kyodo)

The four governors decided to maintain 40,000 yen ($360) subsidies a day for restaurants and bars that comply with the authorities to shorten operating hours.

The Tokyo metropolitan government on Wednesday confirmed 420 new infections, hitting the 400-level for the first time in a week.

The number of daily infections in Tokyo has been slightly trending upward since mid-March, with the rolling seven-day average of new cases persisting high at around 300.

The three other prefectures have also seen their daily cases at three-digit figures multiple times in the past week.

Other areas in Japan have also witnessed an increase in daily virus cases. Miyagi Prefecture in Japan's northeast on Wednesday confirmed 171 cases, a record high for a single day.

"At this rate, there is a strong concern that (infections) will rebound," Toshio Nakagawa, head of the Japan Medical Association, told a press conference.

Nakagawa said strong anti-virus measures should be in place ahead of a potential "fourth wave."

Given the recent upward trend, tourism minister Kazuyoshi Akaba indicated the government will keep suspending its "Go To Travel" subsidy program to boost domestic tourism for a few more weeks.

Akaba told a lower house committee that it seems "difficult" to resume the campaign before the Golden Week holidays from late April to early May.

The program has been suspended since last December due to the pandemic.

Prime Minister Yoshihide Suga declared a one-month emergency in the Tokyo region on Jan. 7, later expanding it to a total of 11 prefectures and extending it for most of them to March 7.

It was further extended by two weeks to last Sunday for Tokyo and its three neighboring prefectures.

No shouts of joy among eateries, theaters despite emergency lifting