Around 80 percent of people working in Japan's art scene said they have been subjected to abuse of power or sexually harassed during the last decade, an online survey by industry insiders showed Wednesday.

Many of the 1,195 people reporting abuse out of 1,449 respondents in the survey conducted from December to January were women, young or freelancers. Their industries ranged from anime to the classical arts. 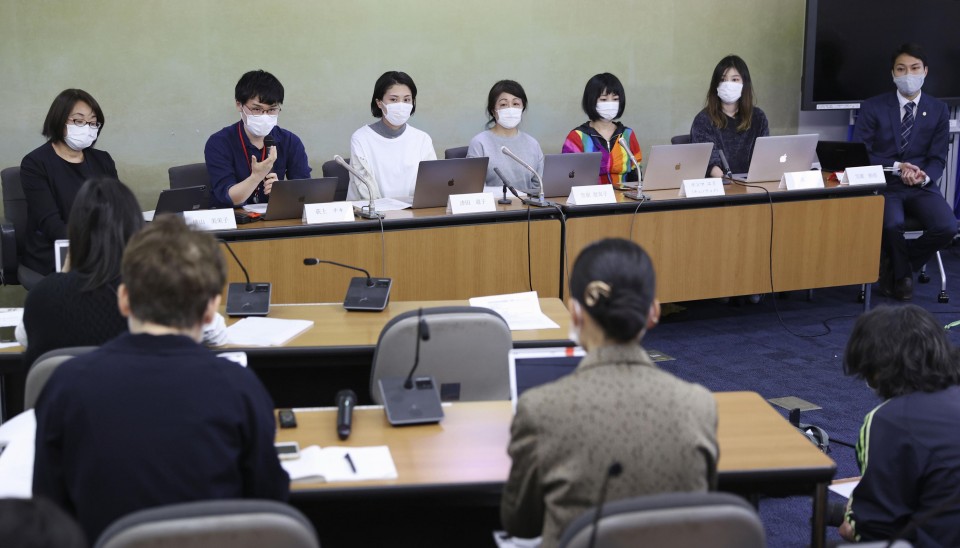 Art industry insiders involved in an online survey on harassment in Japan's art scene hold a press conference in Tokyo on March 24, 2021. (Kyodo)

A person familiar with the matter said that victims found it difficult to complain since they felt they needed the job.

Abuse of power by bosses included facing unreasonable criticism based on arbitrary criteria in work evaluations.

Since vague standards for evaluations are endemic in the art scene, there is a higher likelihood of such abuse of power compared with other industries, the insider said.

One male actor in his 20s wrote in the survey that at a post-production party at an acting school, other actors who had joined the school at the same time as him were told to criticize him.

A cartoonist in his 30s complained his editor had ridiculed him, saying, "Since what you wear is uncool, your work is also unstylish." An actress in her 30s said she was told on the day of a theatrical performance that her costume had been suddenly changed to a swimsuit.

Some sexual harassment victims complained of what they saw as unreasonable requests for nudity based on dubious claims of artistic merit. Others said they were pressured to give sexual favors in exchange for jobs.

Around 60 percent of the respondents were freelancers. Many said they did not feel secure since they were not given contracts to sign, working under unclear conditions for employment and remuneration.

Harassment in the art world garnered prominent attention with the recent discovery that the chief executive creative director of this summer's Tokyo Olympics and Paralympics proposed that Naomi Watanabe, a Japanese plus-size fashion icon, should come down from the sky in a pig costume during the Olympic opening ceremony.

The director Hiroshi Sasaki stepped down from his post after the revelation.