Kyogo Furuhashi and debutant Sho Inagaki each finished with a brace after netting their maiden international goals, while Junya Ito also found the net twice. 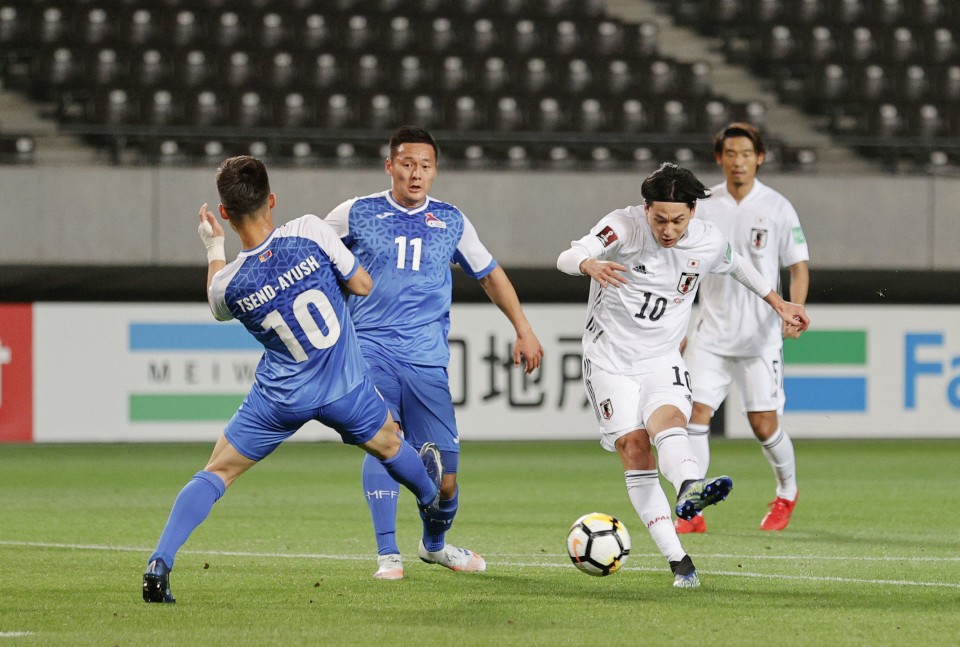 The clash behind closed doors at Fukuda Denshi Arena in Chiba Prefecture near Tokyo was Japan's first Asian qualifying match since November 2019, before the coronavirus pandemic brought international soccer to a standstill.

Takumi Minamino opened the scoring in the 13th minute, collecting a square ball from debutant Ken Matsubara and firing past keeper Munkh-Erdene Enkhtaivan.

The Mongolian custodian did well to keep his side from immediately going further behind, racing off his line to stop Genk winger Ito one on one. But the save was a rare bright moment for Enkhtaivan, who picked the ball out of his net four more times before the break.

Osako added Japan's second in the 23rd minute, pirouetting into the area and netting from close range after Southampton winger Minamino stepped over a through ball from captain Maya Yoshida.

An own goal from Mongolia midfielder Khash-Erdene Tuya rounded out the first-half scoring.

Werder Bremen striker Osako's second goal 10 minutes after the break opened the floodgates for Japan, who were officially playing as the "away" team after the match was moved from Mongolia because of logistical difficulties stemming from the pandemic.

"Rather than focusing on their opponents, our players concentrated on what they wanted to achieve for themselves," Moriysasu said.

"I was able to try some different formations and expand our options."

The Samurai Blue lead Group F after winning all five of their matches in the second stage of Asian qualifying.

They had been scheduled to face Myanmar last week, but the fixture was postponed following the Feb. 1 military coup in the Southeast Asian country.