Membership in fisheries cooperatives in the three northeastern Japan prefectures hardest hit by the 2011 earthquake and tsunami tumbled 24.4 percent after the disaster, sharper than the national average, a Kyodo News tally based on data from their unions showed Thursday.

The sharp decrease came as members abandoned the industry after losing their homes or fishing boats in the massive tsunami or evacuating their hometowns due to the Fukushima Daiichi nuclear crisis, officials of the cooperatives said. 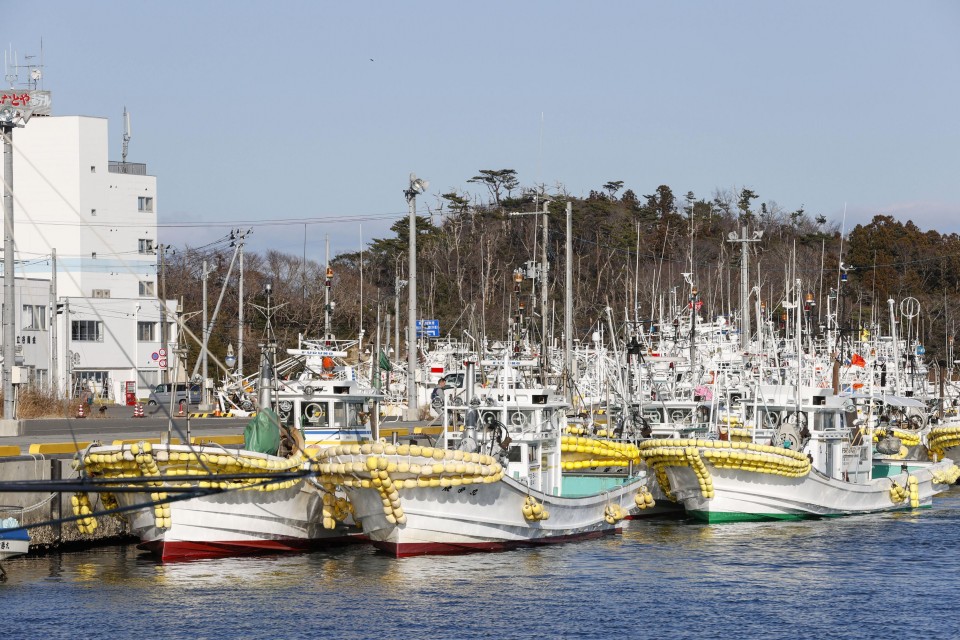 Fishing boats anchored at a port in Soma, Fukushima Prefecture, are pictured on March 3, 2021. (Kyodo)

The total number of fisheries cooperative members in the three prefectures -- Miyagi, Iwate and Fukushima -- fell to 19,910 at the end of 2019 from 26,325 at the end of 2010, around two months before the disaster, according to prefecture-wide bodies.

In contrast, the number of fisheries cooperative members nationwide stood at 285,813 in the fiscal year ended March 2019, down 18.7 percent from fiscal 2010, according to the fisheries ministry.

In Miyagi alone, the number of regular members of fisheries cooperatives -- those who work at sea -- halved, highlighting the severity of the situation facing the key industry supporting the coastal regions' economy.

The cooperatives also have associate members, including family members of fishermen and those engaged in seafood processing.

The Fukushima Prefectural Federation of Fisheries Cooperative Associations attributed the decline in its membership to a natural reduction amid the country's graying population and said that the average age of its members has risen around 10 years over the decade.

The prefectural body in Miyagi saw its numbers decline as members quit their jobs after their houses were moved to higher ground as part of reconstruction efforts following the disaster.

Meanwhile, in Fukushima, where the 2011 quake and tsunami triggered a disaster at a nuclear plant, space for keeping treated radioactive water from the crippled plant is expected to run out by the fall of 2022 at the earliest.

The water has been treated with an advanced liquid processing system to remove most contaminants and the government is considering whether to release it into the sea.

As it awaits the decision, the Fukushima federation is bracing for a negative impact on seafood sales caused by harmful rumors about contamination, in a replay of what happened in the aftermath of the nuclear disaster.