Protests against the Feb. 1 military coup in Myanmar continued Tuesday, but on a smaller scale than those in previous days following the crackdown Sunday by security forces that killed at least 18 demonstrators and wounded over 30 others around the country.

Defying the military suppression, people still turned out in some areas on Tuesday, including the country's largest city Yangon, calling for the release of the ousted leader Aung San Suu Kyi and other members of the National League for Democracy. The party won the November general election but the results have been disputed by the military, who called them fraudulent. 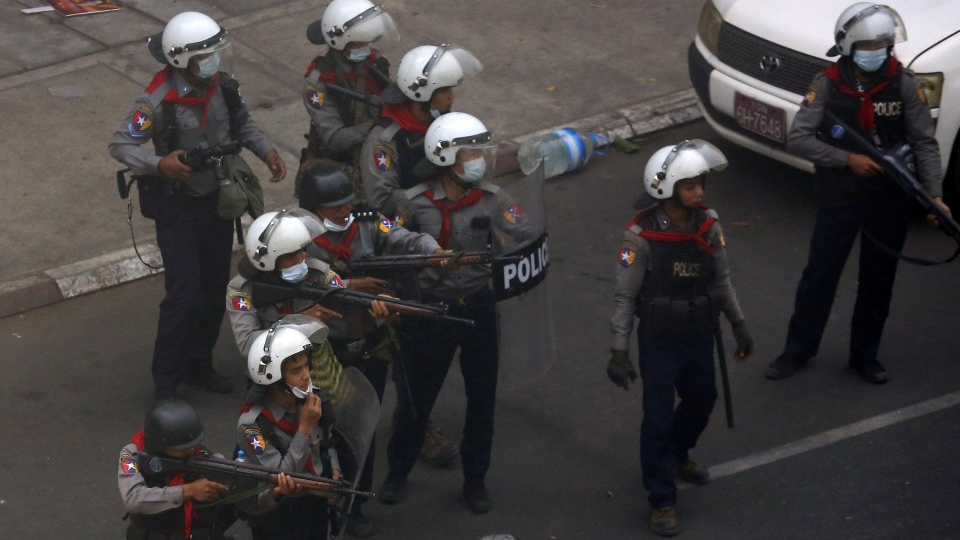 Riot police aim guns towards protesters during a violent crackdown on demonstrators against the military coup in Yangon, Myanmar on Feb. 28. 2021. (NurPhoto/Getty/Kyodo)

Regarding the demonstrations on Sunday, state media said Monday night there were protests in 247 townships of the 330 across the nation and 1,261,465 people joined the rallies. The state media also said 300,600 citizens, or 3.8 percent of the region's population, participated in the Yangon region, while 198,730, or 3.2 percent of the population, protested in the Mandalay region.

Meanwhile, Suu Kyi, who has been detained by the military, faced additional charges Monday when she appeared for a court hearing by videoconference, according to a member of her defense team.

Other countries have continued to condemn the violent crackdowns on the protesters by the Myanmar military and the new U.S. ambassador to the United Nations said Monday the international community should ramp up pressure on the military to restore democracy.

Linda Thomas-Greenfield, the ambassador of the United States, which presides over the U.N. Security Council in March, said at a press conference Monday that the council plans to hold discussions on the situation in Myanmar later this month.