A South Korean court on Wednesday set April 21 as a date for ruling on a damages suit filed by a group of former "comfort women" against the Japanese government over their treatment at Japanese military brothels during World War II.

The ruling would follow a January one from the same court that ordered the Japanese government to pay 12 plaintiffs 100 million won ($88,400) each.

The Seoul Central District Court is widely expected to issue a similar ruling. The previous ruling has been finalized. 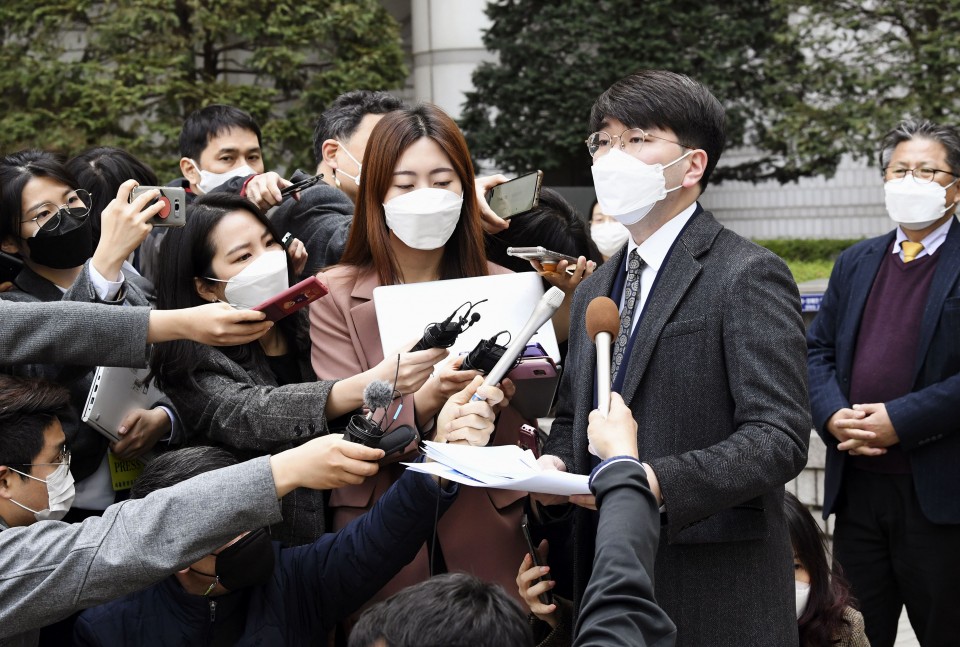 A lawyer (2nd from R) for plaintiffs who have a filed damages suit against the Japanese government over their treatment at Japanese military brothels during World War II is pictured in Seoul on March 24, 2021. (Kyodo)

In both cases, the focus was on whether the court would recognize sovereign immunity -- a principle under international law that allows a state to be shielded against the jurisdiction of foreign courts.

The Jan. 8 ruling did not adopt the principle. It said that by making the women work at military brothels, the Japanese government committed "intentional, systematic and wide-ranging criminal acts against humanity."

The Japanese government, which refused to take part in the trial, citing sovereign immunity, has criticized the ruling as a violation of international law.

South Korean President Moon Jae In, who has recently sought to improve soured ties between the two countries, said soon after the ruling that he felt "a bit perplexed" by the decision.

The Seoul court was originally scheduled to rule on the second case on Jan. 13 But it postponed the ruling after the Jan. 8 ruling, while scheduling a hearing for Wednesday.

A presiding judge said during Wednesday's session that the postponement was needed because of a change in judges that make up the panel and because a few points raised by plaintiffs' lawyers needed further review.