A Kyoto-based high school that was formerly a South Korean educational institution made its debut Wednesday in Japan's national baseball tournament, becoming the first originally foreign school to do so.

The Kyoto International High School's baseball club also made headlines for its school song played at its first game that day. The song had controversial lyrics, alluding to a dispute between Japan and South Korea over the naming of the Sea of Japan. 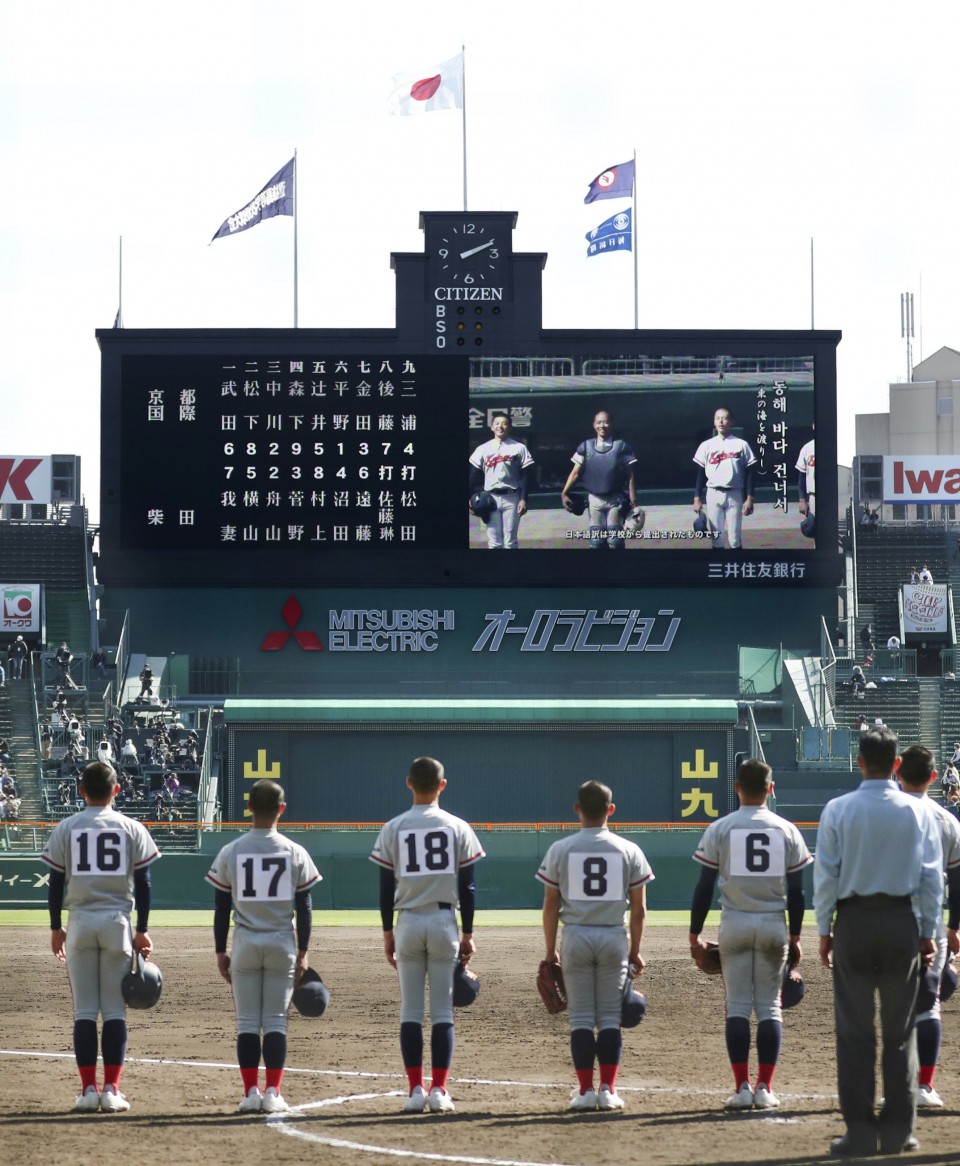 A large screen at Koshien Stadium in Nishinomiya, Hyogo Prefecture, shows the lyrics of Kyoto International High School's song in Korean after its baseball team wins its first game in the national tournament on March 24, 2021. (Kyodo)

The 40-member baseball team, most of whom are Japanese nationals, won Wednesday's game at the iconic Koshien Stadium in Hyogo Prefecture against Shibata High School from Miyagi Prefecture, northeastern Japan.

It is the first time a school with roots in a Korean school has joined the annual national baseball championships for high school players in spring and summer.

The crowd, including alumni, cheered when Kyoto International High School won the game after it went into extra-innings, hoping that the team would become a bridge for friendly Japanese-South Korean relations.

"It was a nerve-wracking game, but well played," said Kim An Il, vice chairman of the school's operator. "I believe it became an opportunity for the people of Japan to learn about South Korea."

The school's predecessor, Kyoto Chosen Junior High School, was originally established in 1947 as an institution for Korean students, most of whose ancestors ended up in Japan before and during World War II. Tokyo ruled the Korean Peninsula between 1910 and 1945.

In 1999, the Korean school's baseball club joined the Japan High School Baseball Federation as the first foreign school in the division adopting the international standard of using hard balls.

Currently, about 30 percent of around 130 students at the school in the western Japan city are from South Korea or have their roots in the Korean Peninsula, according to the school.

Japan's public broadcaster NHK, which televised the game, displayed the lyrics in Korean with Japanese subtitles. The controversial wording of the waters between Japan and the Korean Peninsula was translated as "sea in the east," rather than "East Sea" as South Korea claims.

South Korea has been calling for using the alternative name "East Sea" instead of the "Japan Sea" or the Sea of Japan, while Japan has argued "Japan Sea" is the only internationally established name and sees no need to change it.

The school song was played twice, once during the match and again after the school's victory.

NHK said in its subtitles that it used the Japanese translation submitted by the school, but this immediately drew strong reactions online from conservative social media users as the broadcaster showed the Korean word that means "East Sea."

This year's spring tournament involving 32 teams nationwide has gained more attention than usual as it was canceled last year due to the coronavirus pandemic.