Former Olympic freestyle mogul skier Sho Endo held the torch aloft as the 30-year-old led 20 elementary school pupils at Inawashiro Ski Resort before the flame was brought to the foot of Mt. Bandai aboard a lift. 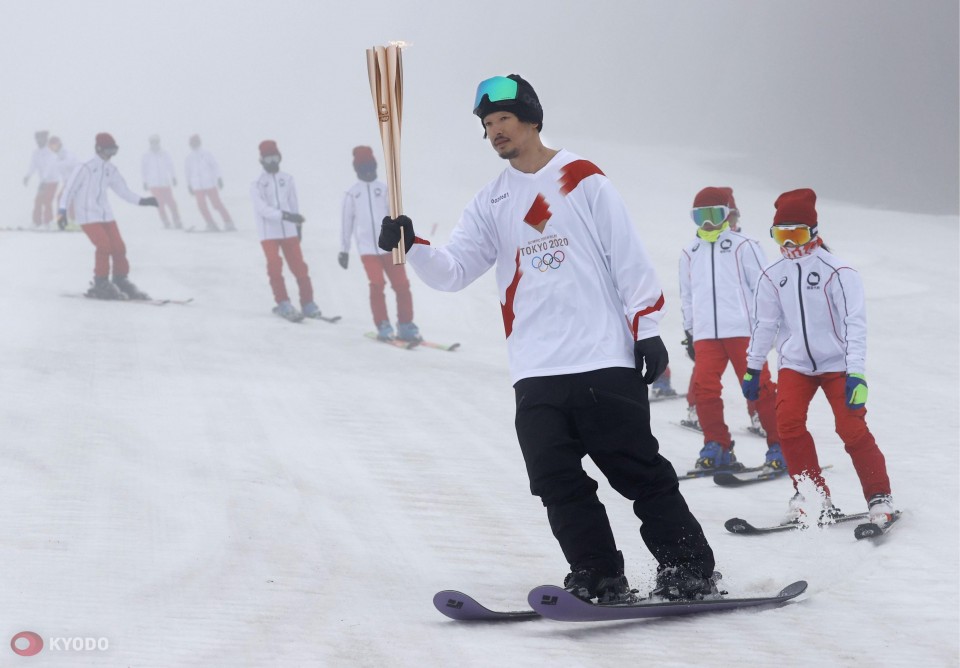 Former Olympic skier Sho Endo (front) skis on a slope with children while carrying the Tokyo Olympic torch in Inawashiro in Fukushima Prefecture on March 26, 2021. The torch relay started at the J-Village soccer training center in the northeastern Japan prefecture on March 25. (Kyodo) ==Kyodo

"There wasn't that much snow, so it was a bit difficult to ski on, but there will never be another experience like this," said 12-year-old Akari Sato after the memorable leg.

Local junior high school students produced five-colored Olympic rings with hula-hoops on the snow as they welcomed the flame at the foot of the mountain with around 100 locals.

The second of the relay's three days in the northeastern prefecture also saw the flame arrive at a sightseeing tower in the town of Mishima and Tsurugajo Castle in the city of Aizuwakamatsu.

The day was capped off by former women's volleyball Olympic player Motoko Obayashi carrying the flame. The relay will continue in the neighboring Tochigi Prefecture from Sunday.