A Tokyo-based restaurant chain operator filed a damages suit on Monday against the Tokyo metropolitan government for ordering that business hours be reduced as a public safety measure during the coronavirus pandemic.

Global-Dining Inc. claims the order "is illegal and unconstitutional as it infringes the right to freedom of business" in the first such lawsuit anywhere in Japan. 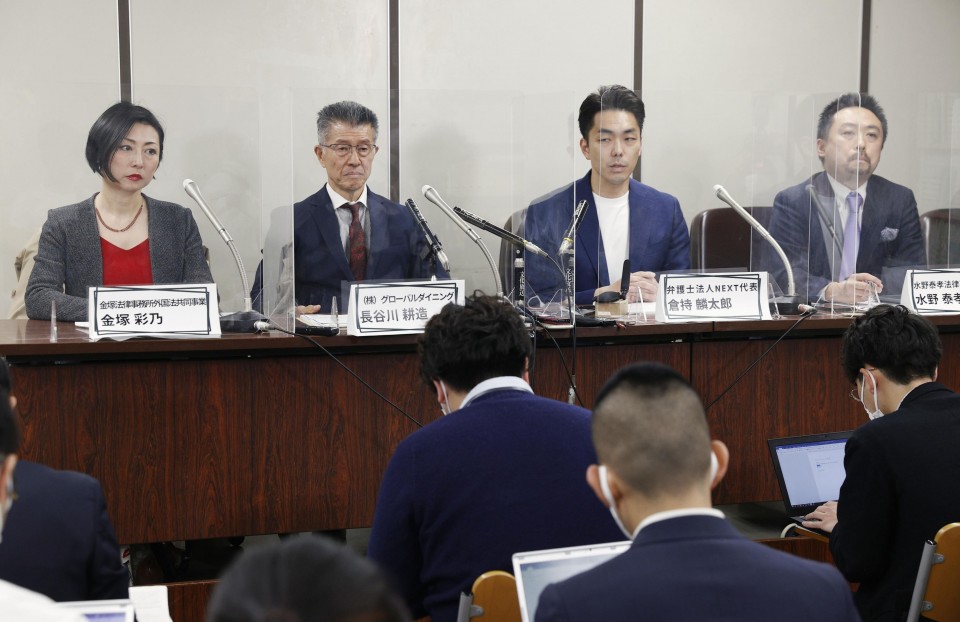 Global-Dining Inc. President Kozo Hasegawa (2nd from L) and lawyer Rintaro Kuramochi (2nd from R) are pictured during a press conference in Tokyo on March 22, 2021. (Kyodo)

The company runs dozens of restaurants in the Tokyo area including the Gonpachi "izakaya" Japanese-style pubs, one of which is famous for its scene in Quentin Tarantino's film "Kill Bill," and for the site of a dinner in 2002 between then Prime Minister Junichiro Koizumi and U.S. President George W. Bush.

The restaurant operator, listed on the Tokyo Stock Exchange's Second Section, is seeking only 104 yen ($1) in damages, saying it is looking to shine light on the impact of government-enforced anti-virus measures that it believes excessively hamper business operations and people's lives.

The plaintiff's lawyer Rintaro Kuramochi said imposing blanket restrictions without offering evidence that restaurants are a source of infections violates the freedom of business guaranteed under the Constitution.

After a revision to the coronavirus special measures law last month, prefectures can give an order to businesses such as restaurants to shorten business hours during a state of emergency if the businesses defy the initial request without a valid reason.

Under the revised law, businesses can be fined up to 300,000 yen if they do not comply.

The lawyer also argued that Tokyo Gov. Yuriko Koike violated a duty of care when she issued the order.

Koike told reporters on Monday that the Tokyo government has been "going through the procedure carefully in line with the revised law."

Restaurants operated by the company were among 2,000 establishments that did not comply with a request to close by 8 p.m. under a COVID-19 state of emergency issued in early January in the Tokyo area and other prefectures, according to the plaintiff's side.

The order "took aim" at the company which publicly voiced its intention to disobey the request and "violated the equality under the law and freedom of expression," the plaintiff said.

Global-Dining said in a release on Jan. 7, "We cannot comply with the request to shorten business hours, given the current (insufficient) subsidies and support from authorities."

Of the 2,000 establishments, the Tokyo metropolitan government last Thursday ordered 27, of which 26 were Global-Dining outlets, to close by 8 p.m. until the lifting of the emergency declaration at the end of Sunday. The company complied with the order.

Global-Dining's president, Kozo Hasegawa, said at a press conference Monday that his company has been taking precautionary measures at its restaurants including requiring staff to wear masks, wash hands regularly and practice social distancing.

"No clusters have been found in our restaurants," he added.

As the court could potentially rule on whether the anti-virus measure is unconstitutional, the central government's top spokesman Katsunobu Kato said at a press conference Monday that the order falls within the Constitution as its purpose and restrictions were "reasonable."