Komusubi Takayasu won a battle of former ozeki wrestlers to take the sole lead of the Spring Grand Sumo Tournament on Sunday, the half-way point of the 15-day meet at Tokyo's Ryogoku Kokugikan.

The 31-year-old Takayasu, who has yet to win a grand tournament, improved to 7-1 for the tournament and 12-7 in his career against sekiwake Terunofuji (6-2). 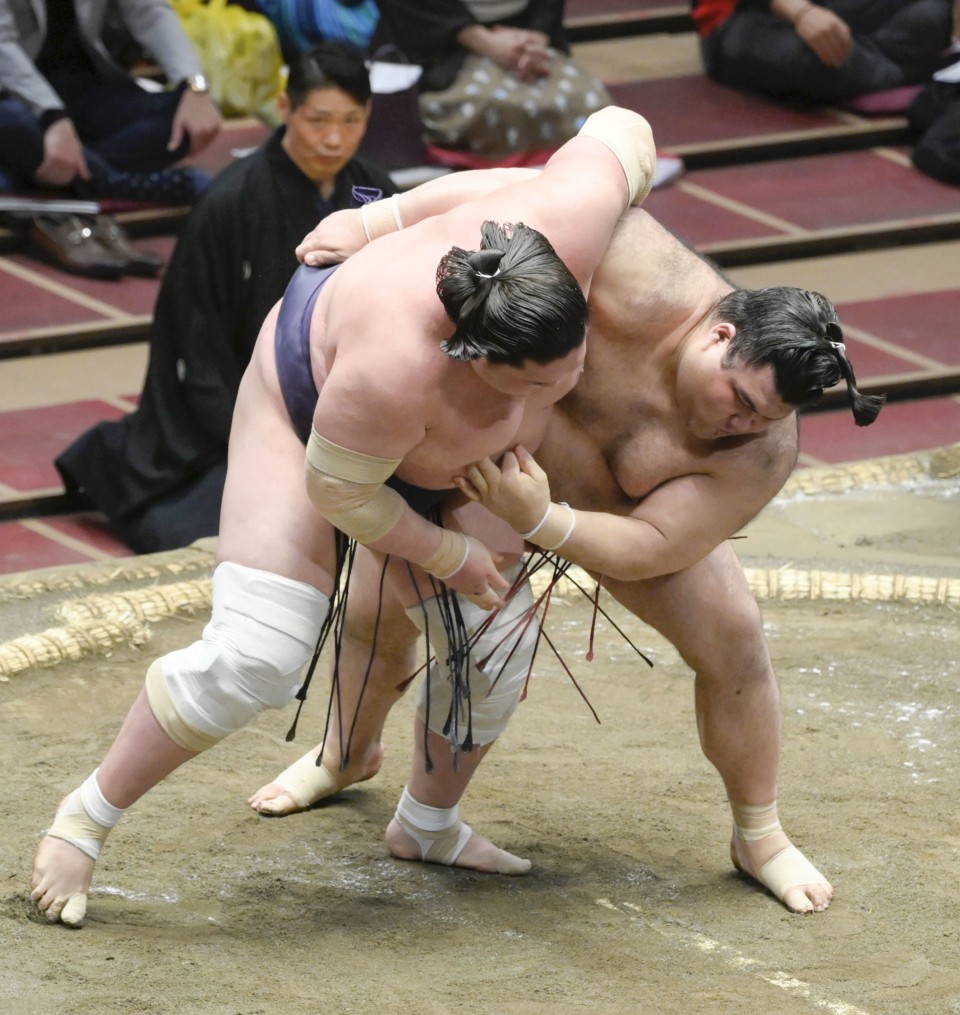 A 29-year-old two-time champion, Terunofuji appeared riled by his opponent's last-minute mind games. The Mongolian crouched ready for the clash to start, and huffed audibly when Takayasu stood back on the raised ring and made his opponent wait.

Takayasu took that patience into the bout. He received his opponent's charge, while blocking him from getting a belt hold. When the sekiwake extended his reach further, Takayasu struck, grabbing first one belt hold and then another.

With his prize catch on the line, Takayasu let his bigger opponent struggle and wear himself down before finally forcing him over the straw bales.

Terunofuji is chasing the 10 wins he needs here to secure re-promotion to the ozeki rank he last held in 2017 before knee surgeries sent his ranking plummeting into the depths of sumo's hierarchy.

Veteran No. 9 maegashira Chiyonokuni also started the day with six wins, and like Terunofuji, appeared to lose the plot in his match as he suffered his second loss.

Chiyonokuni, who first competed in the elite makuuchi division in 2012 but who has never risen as high as the three "sanyaku" ranks below yokozuna, failed to overcome a 53-kilogram weight disadvantage against 200-kg Mongolian No. 6 Ichinojo (5-3).

After both wrestlers failed to get a belt hold, Chiyonokuni gained some separation only for the bout to devolve into a shoving and grabbing match he was ill-suited to win. It took Ichinojo two tries before he managed to take his opponent by the arm and fell him with a "kotenage" armlock throw.

Sekiwake Takanosho fell further off the pace with his third loss, felled by No. 3 Meisei (5-3), who entered the bout on the heels of back-to-back wins over ozeki opponents. 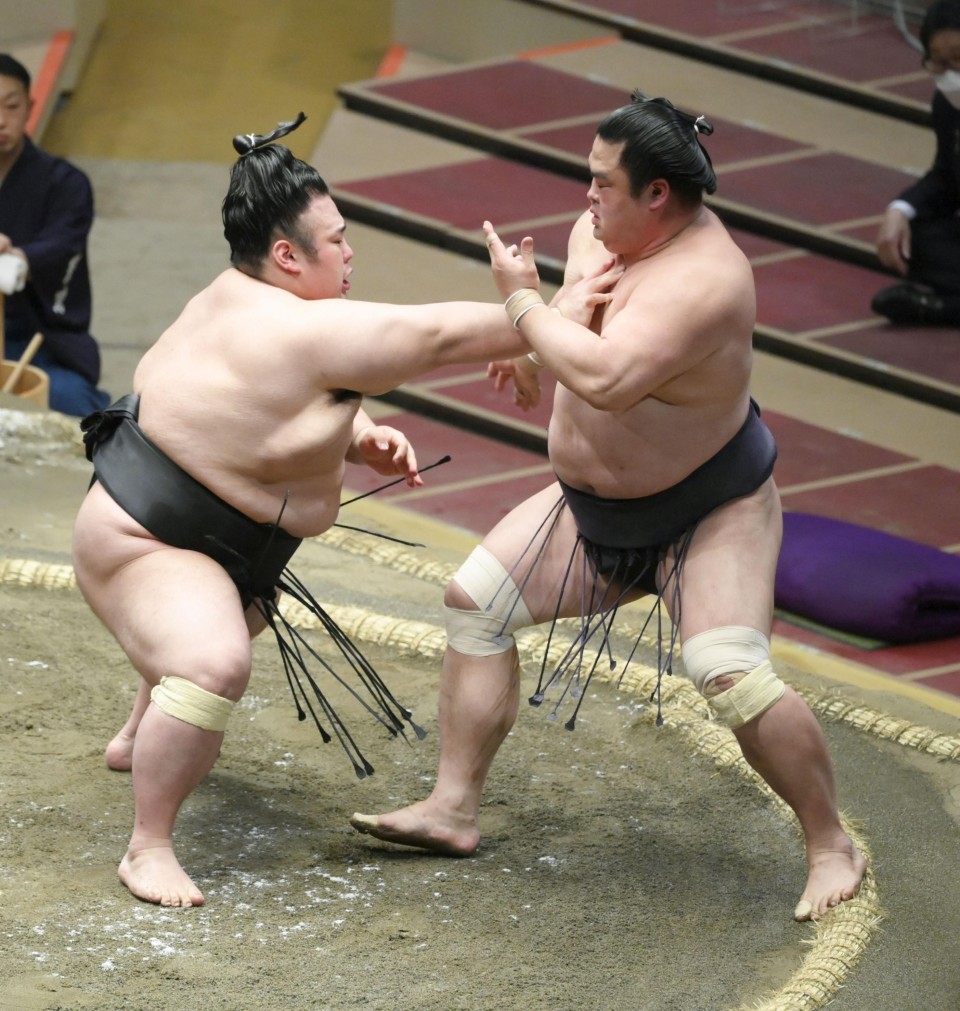 After an injury-hit January tourney in which he managed just two wins, Takakeisho is a "kadoban" relegation-threatened ozeki and needs three more victories here to avoid forfeiting his rank.

In the day's finale, komusubi Daieisho (3-5) looked like the wrestler he was in January when he won his first championship. The komusubi lodged one hand against the throat of ozeki Asanoyama (5-3) and drove him quickly from the ring.

No. 2 Hokutofuji (5-3), who has compiled an impressive array of victims here, including two of the three ozeki and sekiwake Takanosho, miss-placed one heel over the straw bales as he pursued No. 3 Shimanoumi (2-6) from the ring, and was handed his third loss.

Popular No. 8 Tobizaru failed to keep pace with the leaders, suffering his third loss when No. 13 Terutsuyoshi (5-3) broke a deadlock with a nifty beltless arm throw and then shoved him out.

Hakuho, who has withdrawn from the tournament along with fellow yokozuna Kakuryu, had knee surgery on Friday, a source with knowledge of the matter said Sunday. The 36-year-old is expected to compete again in July.

The March tourney is traditionally held in Osaka, where it opened a year ago -- the first grand tournament behind closed doors. But amid the difficulties posed by the ongoing pandemic, the Japan Sumo Association chose to stage its fifth straight tourney in Tokyo.

A total of 28 lower-ranked wrestlers have been ruled out from the meet for coronavirus-related reasons, compared to 65 sidelined in January.