Sparked by a coup a month ago, the recent turmoil in Myanmar has many Japanese companies on the alert for any signs of change in prospects for what they see as a promising market.

The Myanmar military's seizing of power on Feb. 1 and subsequent protests have cast a shadow over the Southeast Asian nation of 54 million people. An extended period of chaos may prompt Japanese firms to hold off on new investments and review their business strategies, experts say. 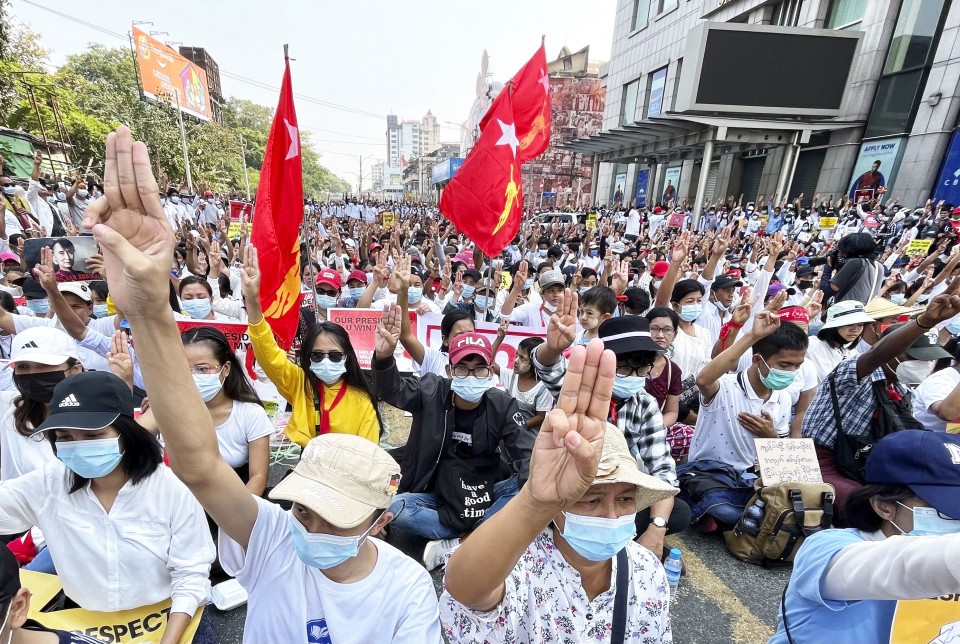 "We can say the coup is against democracy, but as one company what we can do for now is to keep close tabs (on what comes next)," an official at a Japanese company that does business in Myanmar said.

More than 400 Japanese companies have entered Myanmar, a key link between India and Southeast Asia, triggered by the county's shift from military rule in 2011.

Before the coronavirus pandemic and current turmoil, the economy grew 6.8 percent in 2019, ranking 10th as a market with growth potential over the next three years in a 2020 survey on Japanese manufacturers by the Japan Bank for International Cooperation.

Investment from Japan stood at $768 million, or roughly 14 percent of total foreign investment between 2019 and 2020, and more than the $553 million that came from China, according to the Directorate of Investment and Company Administration, a government agency in Myanmar.

The Myanmar military declared a yearlong state of emergency and detained State Counsellor Aung San Suu Kyi, President Win Myint and other members of the ruling National League for Democracy. The coup followed the NLD's landslide victory in the November general election, an outcome disputed by the military as fraudulent. As international concerns grew over the turn of events, commander-in-chief Senior Gen. Min Aung Hlaing pledged to carry on the foreign and economic policies of the NLD-led government.

"The military would not have imagined that international criticism would increase like this. There are no guarantees that they can rule the country in a stable way with public sentiment against the military growing," said Kei Nemoto, a professor specializing in the modern history of Burma (Myanmar) at Sophia University.

"Political instability will be a negative for businesses. There could be companies scaling back operations, ending joint partnerships (with Myanmar firms) and new investments would disappear," Nemoto said.

For now, the impact from the political unrest remains modest even as manufacturers such as Suzuki Motor Corp. had to halt production temporarily when the coup occurred.

Toyota Motor Corp. delayed the start of an auto plant in the Thilawa Special Economic Zone near Yangon. The automaker initially planned to begin operations by the end of February for annual output of about 2,500 Hilux pickup trucks a year.

Kirin Holdings Co. began talks to end its partnership in Myanmar with Myanma Economic Holdings Public Co., a local conglomerate that the United Nations has identified as being owned by senior members of the military. Kirin has two joint ventures -- Myanmar Brewery Ltd. and Mandalay Brewery Ltd. -- with the local partner.

The coup came at a time when hopes were rising for Myanmar's economic progress and further democratic development, company officials and experts say.

"It's unlikely that we will see an increasing number of Japanese companies pulling out rapidly, but new investment decisions will be harder to make for the time being," Tanaka said, adding that companies already in Myanmar are seeking to continue operations by ensuring the safety of their workers. "It depends how the political situation turns out."

Kirin President and CEO Yoshinori Isozaki has said the Japanese company will not withdraw from Myanmar, a market that it entered in 2015. Kirin's sales in the country totaled 31.8 billion yen ($293 million) in 2020, only a fraction of its 1.85 trillion yen in total revenue, but the company is "hoping to find a local partner that is not related to the military," a Kirin official said.

Among Japanese retailers, supermarket operator Aeon Co. has plans to open its first Aeon Mall shopping complex near the special zone in fiscal 2023.

Japan and Myanmar have been deepening diplomatic and economic ties in recent years. The Japanese government has been extending economic assistance to Myanmar, helping the country improve basic infrastructure and leading the drive to develop the Thilawa Special Economic Zone.

Over 110 companies are operating or plan to start operations in the foreign investment-friendly zone, of which roughly half are Japanese. The list includes firms from Thailand, South Korea, Taiwan and Malaysia as well as Myanmar.

Sophia University's Nemoto said companies already operating in the zone will be affected if Myanmar is hit with new sanctions by Western nations such as the United States over the coup and the use of force against demonstrators.

"The Japanese government has to utilize the channels that it is believed to have with the military (to turn around the situation) while limiting assistance to humanitarian assistance," the professor said. "The Myanmar situation is shaping up to be a test of endurance."