Myanmar protesters gather near U.S. Embassy while Blinken in Tokyo

Myanmar protesters gathered Wednesday near the U.S. Embassy during U.S. Secretary of State Antony Blinken's visit to Tokyo, calling on the international community for stronger action against last month's military coup in the Southeast Asian country. 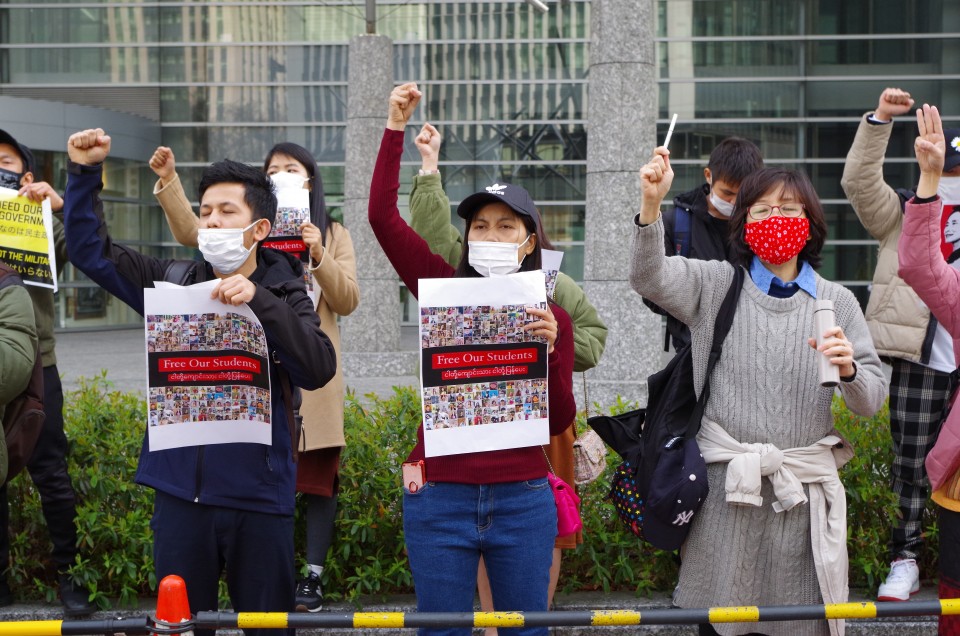 People hold up signs and raise their fists in protest at Myanmar's military coup in Tokyo on March 17, 2021. (Kyodo)

"I want the Japanese government and the United States to stand against the military," one of the organizers, who only wished to be identified as Thiri, told Kyodo News.

More than 200 people have been killed in the violence since the coup, according to the Assistance Association for Political Prisoners activist group.

Signs reading "Please save Myanmar" were held up, while people chanted, "Free Aung San Suu Kyi," referring to the country's civilian leader detained by the junta.

The protesters also urged the so-called Quad countries -- Japan, the United States, Australia and India -- to take more assertive action against the military, with some raising their fists and shouting, "No more statements, take actions."

The leaders of the four countries issued a joint statement last week vowing to restore democracy in Myanmar.

One of the protesters, Yan Paing Oo, who works in Japan, said the Japanese government should side with civilians, not the military, as more and more people are dying in his home country. He said he felt helpless at being unable to do more for his compatriots.

As part of a string of protests in Tokyo and elsewhere since the coup, around 1,500 protesters gathered in the central Japan city of Nagoya last month to urge the Japanese government to take tougher action. Aichi Prefecture, of which Nagoya is the capital, has the second-largest population of Myanmar people in Japan following Tokyo.

With no end to the military's crackdown in sight, countries such as the United States and Britain have imposed sanctions on members of the junta.

"We will continue fighting to bring back democracy as soon as possible," Thiri said.