Grand champion Hakuho will have surgery for a right knee injury that forced his withdrawal Tuesday from the Spring Grand Sumo Tournament.

The 36-year-old yokozuna informed the Japan Sumo Association he needs surgery to treat a damaged right patella and swelling around the joint, followed by a likely two-month rehabilitation.

His stablemaster Miyagino said Hakuho plans to return after recovering from the surgery and will decide whether to continue competing based on the results of his comeback tournament.

"He was told (by a doctor) that he couldn't wrestle in his current condition. He said he will make his final decision at the Nagoya tournament (in July)," Miyagino said. 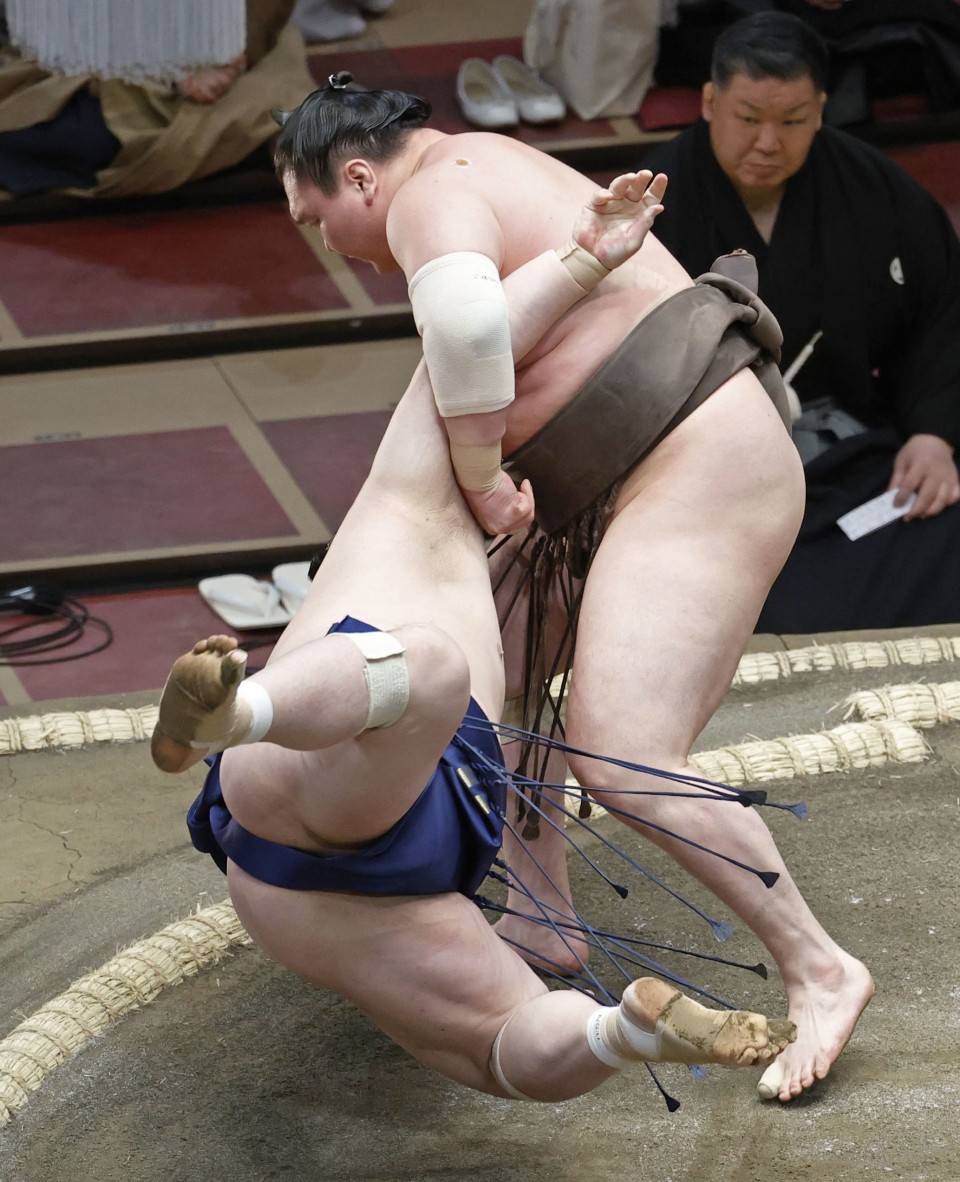 Grand champion Hakuho (R) defeats Takarafuji with an arm-lock throw on Day 2 of the Spring Grand Sumo Tournament at Ryogoku Kokugikan in Tokyo on March 15, 2021. (Kyodo)

The procedure, to take place later this month, will be on the same knee on which Hakuho underwent endoscopic surgery last August.

The yokozuna won his first two bouts of the ongoing 15-day tournament at Tokyo's Ryogoku Kokugikan, but forfeited his scheduled match on Day 3 against No. 1 maegashira Onosho.

Hakuho, who holds the all-time record of 44 top-division titles, will have missed all or part of six consecutive grand tournaments.

With fellow Mongolian-born yokozuna Kakuryu having already pulled out before the opening day, the March tournament will proceed without a grand champion competing.

Both yokozuna have been cautioned by the JSA over their repeated absences.

Following the knee surgery last August, Hakuho had planned to return at the New Year tournament but was forced to sit out due to a positive coronavirus test.

He has not completed a grand tournament since last March, when he won the Emperor's Cup with a 13-2 record.

If Hakuho misses the May tourney as expected, his streak of six consecutive tournament withdrawals will tie him for third longest by a yokozuna since the sport went to the six grand tournament format in 1958.

Musashimaru retired during his comeback in 2003 after pulling out of six straight meets.

The lone exception so far has been iconic yokozuna Taiho. The great champion missed all or part of five straight tournaments but bounced back to a 14-1 record and a championship in his return. Starting in his September 1968 comeback tournament, Taiho reeled off 45-straight wins.

Unlike Hakuho, however, Taiho was 28 when he returned from his longest absence, and even then he was out of the sport in May 1971, the month he turned 31.

Sumo: Returning Hakuho a wildcard as Terunofuji aims for ozeki