A new multilingual website has been launched with the aim of updating people's image of Fukushima Prefecture, the area in northeastern Japan that was most affected by the 2011 nuclear accident, the world's worst since the Chernobyl disaster in 1986.

The "Fukushima Updates" website, available in Japanese, English, Chinese and Korean, has been set up to reassure people over various concerns they may have -- such as the region's radiation levels and food safety standards -- through the delivery of correct information in the hope that viewers can "update" their perception of the prefecture as being unsafe. 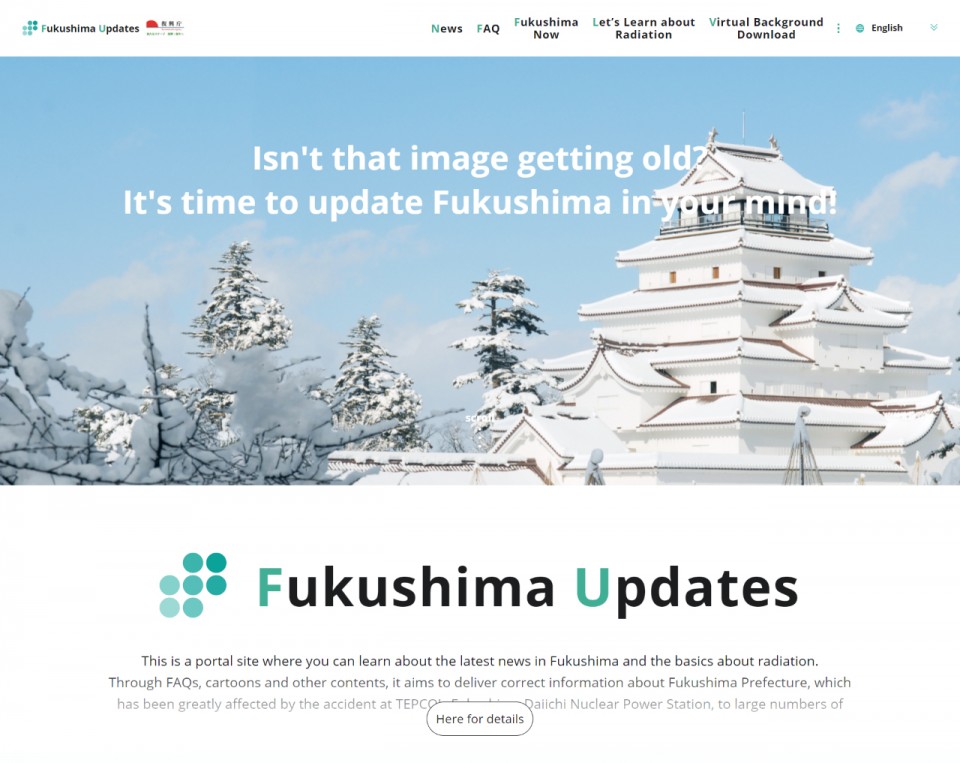 It was established in early March by Japan's Reconstruction Agency, which oversees recovery from the devastating earthquake and tsunami that triggered the crisis at the Fukushima Daiichi plant.

"Ten years have passed since the Great East Japan Earthquake. In ongoing efforts to eliminate negative reputation impact, we feel it is important to encourage people to know about Fukushima, eat foods from Fukushima, and come to Fukushima," the website says.

It includes answers to frequently asked questions, infographics as well as cartoons. The content reflects surveys on Fukushima conducted in several countries prior to the launch that showed most people wanted to learn about food safety and the environment.

The 23 most commonly asked questions include "Can people live in Fukushima?" and "How high are the radiation doses in Fukushima Prefecture?"

TEPCO to be banned from restarting nuclear plant over safety flaws

The site says "normal life is possible" in most of Fukushima, which has a population of 1.82 million, except for 2.4 percent of the prefecture where evacuation orders are still in place due to the nuclear disaster.

It also says radiation levels in the main cities of Fukushima Prefecture are "no different from those in Tokyo and other major cities around the world," although they are relatively high in no-go zones.

The safety of local food and fish is also emphasized and viewers can compare Japan's safety standards with those of the European Union and the United States and learn about the recent results of radiation inspections.

It also says the International Atomic Energy Agency and the Food and Agriculture Organization have assessed Japan's monitoring methods as "appropriate."

"People overseas have a strong impression of the immediate aftereffects of the Fukushima nuclear accident, and there is a gap with the present reality," an official of the Reconstruction Agency said.

Fifteen countries and regions, including China, South Korea and the United States still impose import restriction on food from Fukushima Prefecture, although that number is well below the 54 that originally did.

The website also explains about the difference in damage caused by the Fukushima nuclear accident and the Chernobyl disaster, saying the amount of radioactive substances released into the atmosphere was far less in the Japanese crisis, and there has been no impact on people's health due to radiation exposure.

Both accidents are ranked the highest 7 on an international scale of nuclear crisis severity level -- the only two with that classification to date.