Takayasu extended his lead Tuesday at the Spring Grand Sumo Tournament, winning a marathon bout against demotion-threatened ozeki Takakeisho following losses by both of his nearest rivals.

Komusubi Takayasu has not lost since the opening day of the 15-day tournament at Tokyo's Ryogoku Kokugikan and holds a two-win buffer at 9-1 over ozeki Asanoyama, sekiwake Terunofuji, No. 9 maegashira Chiyonokuni, and No. 8 Tobizaru. 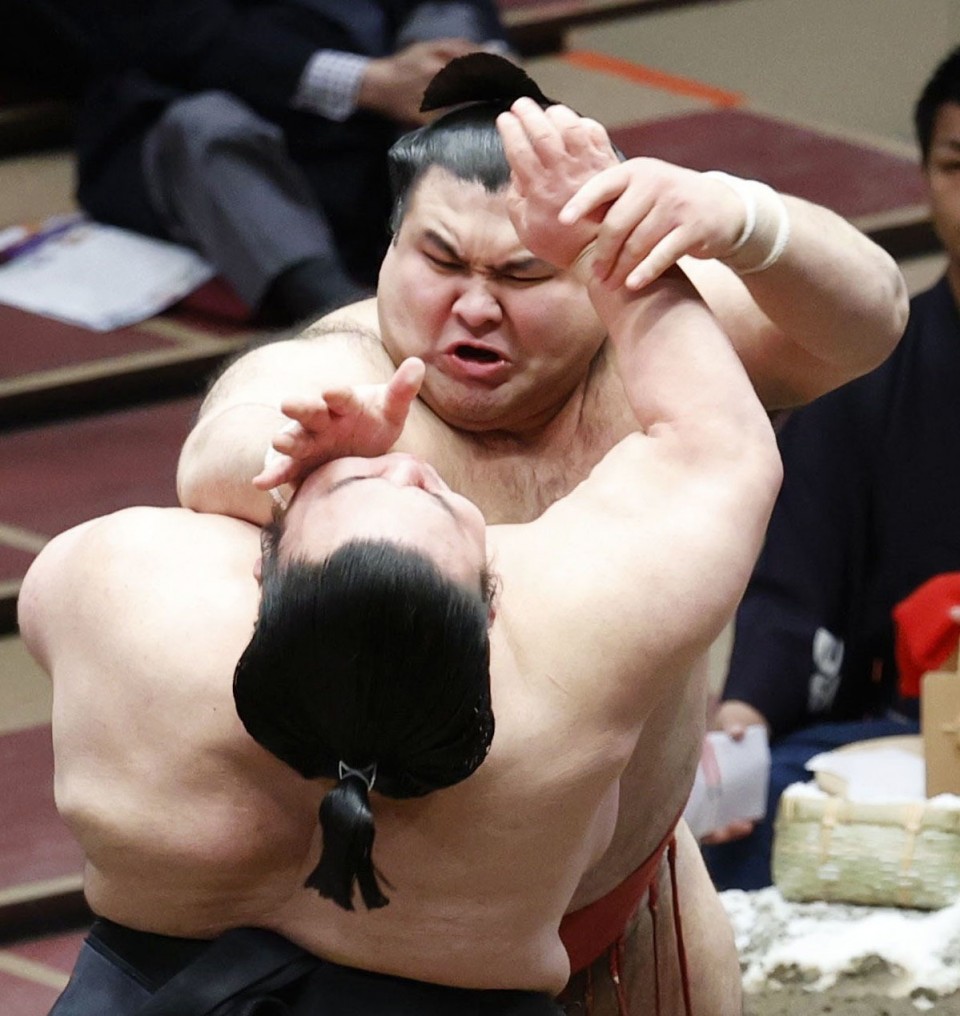 Asanoyama, meanwhile improved to 7-3 with an impressive win over sekiwake Takanosho (6-4), while Tobizaru recorded his seventh victory against No. 13 Chiyoshoma (5-5).

Having each won six of their past 12 meetings, neither Takekeisho (6-4) nor former ozeki Takayasu was able to gain an early upper hand in their latest battle.

After slapping and shoving each other around the ring, the pair locked up near the middle in a long stalemate. Takekeisho eventually attempted a leg sweep, giving Takayasu an opening to reposition his grip and win the two-and-a-half-minute bout with an overarm throw.

"I was determined (to win). I just concentrated on fighting my own way," said the 31-year-old Takayasu, who is chasing his first Emperor's Cup.

Following his Day 2 victory over Asanoyama, Takayasu has beaten two of the three ozeki who are headlining the March tournament in the absence of injured grand champions Hakuho and Kakuryu. He will face the third, Shodai, on Day 11.

"I'll keep focusing on my own sumo and not worry about what happens around me," Takayasu said.

Takakeisho will face No. 4 Kiribayama (4-6) next. The "kadoban" ozeki needs at least eight wins here to stay at sumo's second-highest rank after posting a losing record in January.

Terunofuji, who can earn promotion back to ozeki with 10 wins here, had the early momentum against Shimanoumi, but the rank-and-filer resisted multiple force-out attempts, sliding to the side each time, until he thrusted the big Mongolian to the clay.

Asanoyama demonstrated his impressive grappling technique with a beltless arm throw against Takanosho, while fellow ozeki Shodai (5-5) also looked convincing as he toppled No. 4 Myogiryu (5-5).

Komusubi Daieisho, winner of the January tournament, improved to 5-5 by quickly bundling out No. 2 Hokutofuji (6-4) for his fourth straight win.

Komusubi Mitakeumi (5-5) also had a straightforward win against struggling No. 1 Onosho (2-8), who is now guaranteed to finish the meet with a losing record.

The March tourney has been relocated to Ryogoku Kokugikan from its traditional home in Osaka amid the difficulties posed by the ongoing coronavirus pandemic.