International football returns to Japan in rout of South Korea 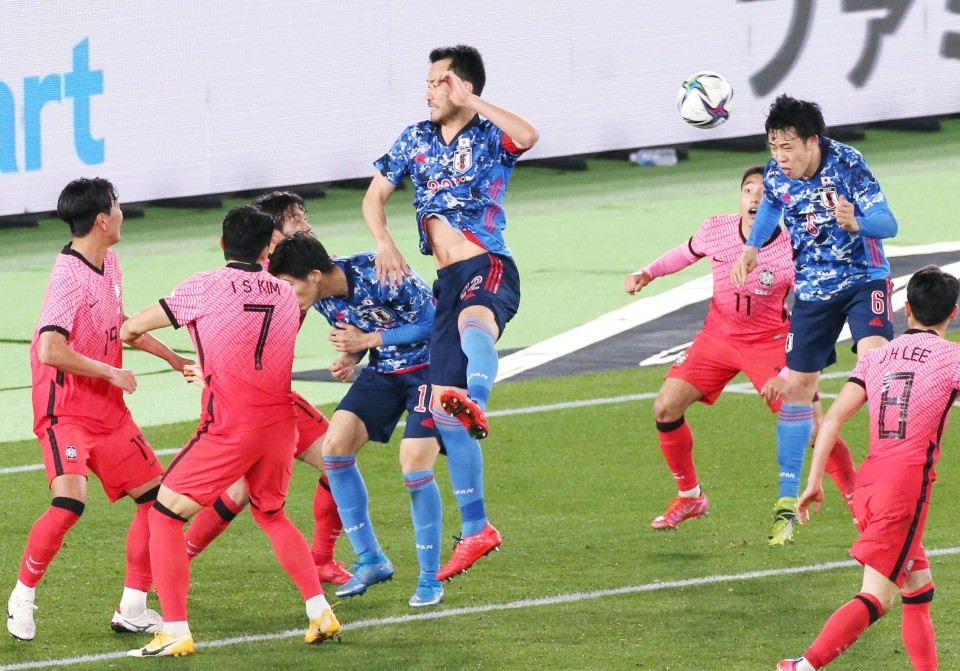 Wataru Endo (2nd from R) of Japan scores a goal with a header in the second half of an international friendly against South Korea at Nissan Stadium in Yokohama on March 25, 2021. (Kyodo) ==Kyodo

Yuya Osako did not get on the scoresheet in the Samurai Blue's first match of the year and first in Japan since the start of the coronavirus pandemic.

Japan, ranked 27th in the world, last played 38th-ranked South Korea in December 2019, but it was the first friendly between the fierce East Asian rivals in 10 years. The game was played before 8,356 socially distanced fans who were prohibited from vocal cheering.

"Our buildup to this game was not easy. The players did a good job of concentrating on their tasks and preparing themselves," Japan manager Hajime Moriyasu said. "The staff, too, had it hard preparing in these difficult circumstances, but all that effort paid off in today's result."

Japan played aggressively, giving their opponents little space on the ball and taking every shot that presented itself. 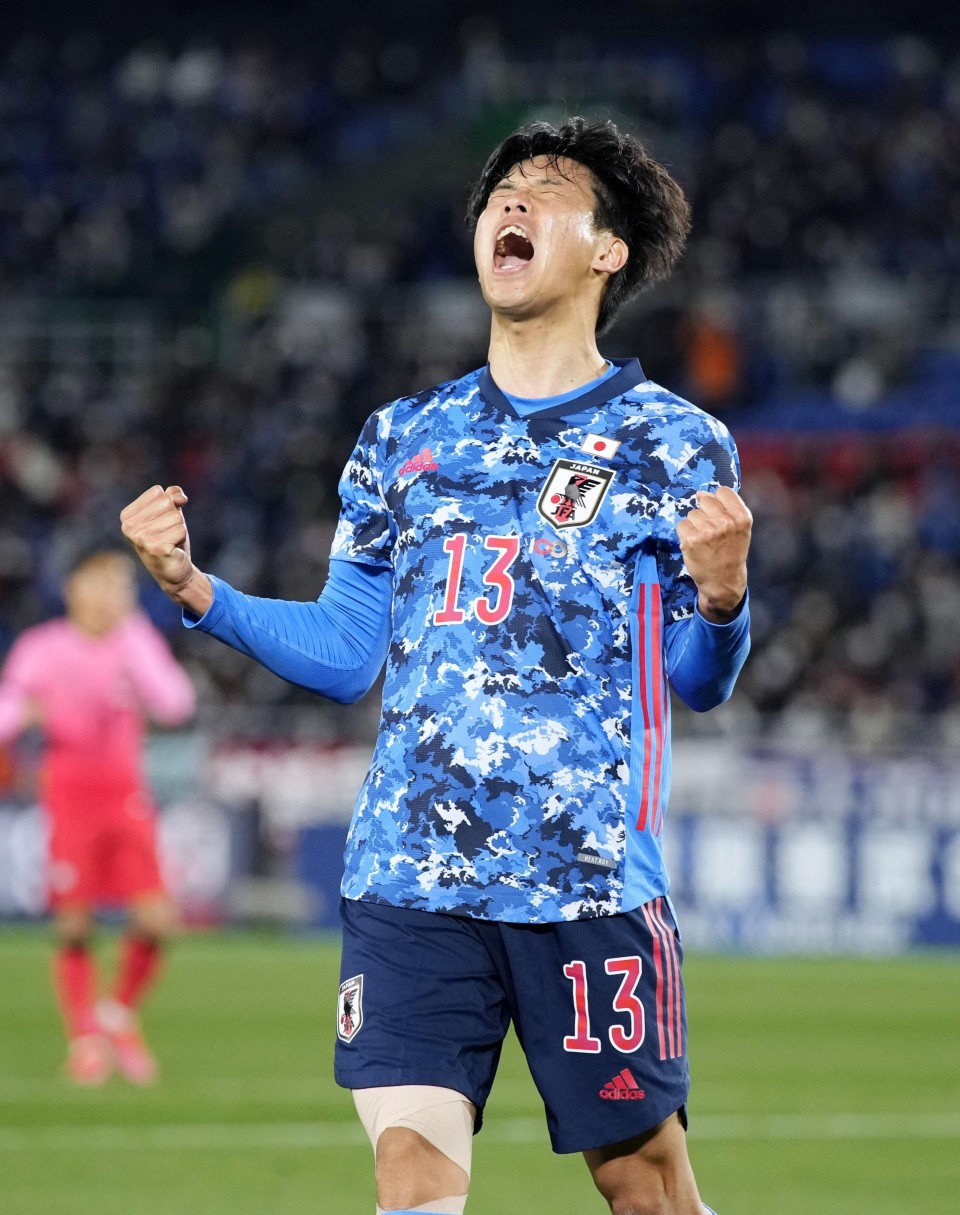 Miki Yamane of Japan reacts after opening the scoring in the first half of an international friendly against South Korea at Nissan Stadium in Yokohama on March 25, 2021 (Kyodo) ==Kyodo

"The South Korean pressure was often quite severe, but the guys never stopped attacking and going in search of that next goal," Moriyasu said.

Kawasaki Frontale's Yamane marked his senior national debut with a 17th-minute goal, scoring after an opportunistic assist from Osako.

The ball bounced to the Werder Bremen forward at the edge of the area with his back to the goal. He jumped and delivered a back-heel through pass between two defenders to Yamane, whose shot rattled in off the bar.

Eintracht Frankfurt's Kamada added on in the 27th minute. As Osako got the ball at midfield, he held up to avoid a cluster of defenders, and that pause allowed a wave of Japan attackers to rush forward and overwhelm the defense. Osako then fed Kameda, who dribbled into the right side of the area and fired behind a defender and just inside the far post for his second international goal. 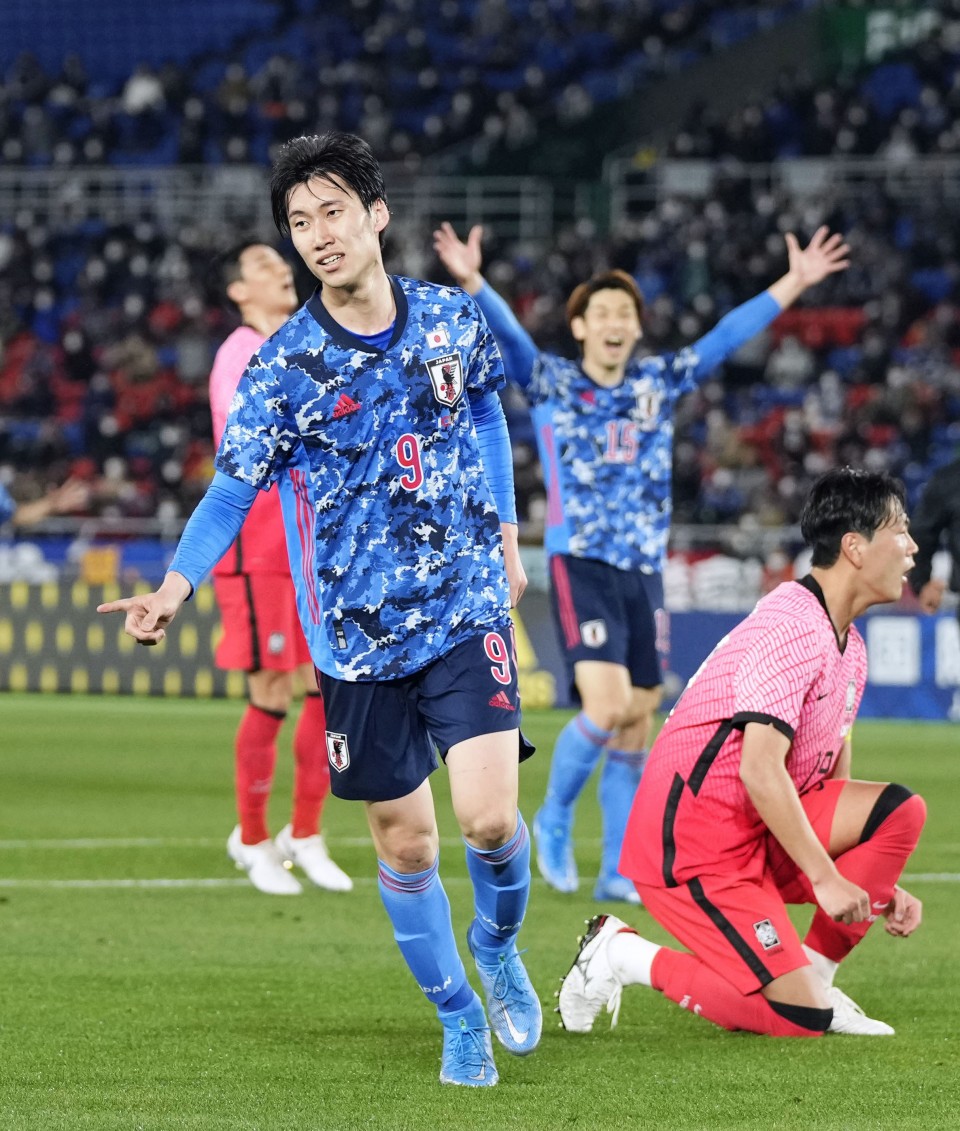 Daichi Kamada (9) of Japan reacts after scoring a goal in the first half of an international friendly against South Korea at Nissan Stadium in Yokohama on March 25, 2021. (Kyodo) ==Kyodo

The hosts nearly made it 3-0 six minutes after the break when another audacious Osako back-heel found Southampton's Takumi Minamino near the penalty spot. Minamino patiently dodged one defender before missing an open shot.

South Korea, captained by Gamba Osaka's Kim Young Gwon, finally found a way through Japan's midfield around the hour mark and began making keeper Shuichi Gonda earn his pay. The visitors forced the Shimizu S-Pulse gloveman to make a pair of good saves as they laid siege to Japan's goal in a series of set plays.

But Japan weathered that storm, and Stuttgart's Endo headed in off an 83rd-minute corner, making up for a header he missed in the opening minutes.

The win improved Japan's record against South Korea to 14-23 with 40 draws.

Japan's next challenge will be Tuesday's World Cup qualifying Group F game against Mongolia at Chiba's Fukuda Denshi Arena. Japan lead the five-team second-round group with 12 points from four games. The eight group winners and four best runners-up will advance to the third round.