With less than five months until the start of the Tokyo Olympics, Japan still faces many unanswered questions about how to hold the world's biggest sporting event amid the coronavirus pandemic, one major concern being whether spectators will be admitted.

While the Japanese government and the International Olympic Committee remain adamant that the Olympics and Paralympics will be staged following their one-year postponement, it is unclear what exactly the Summer Games will look like. 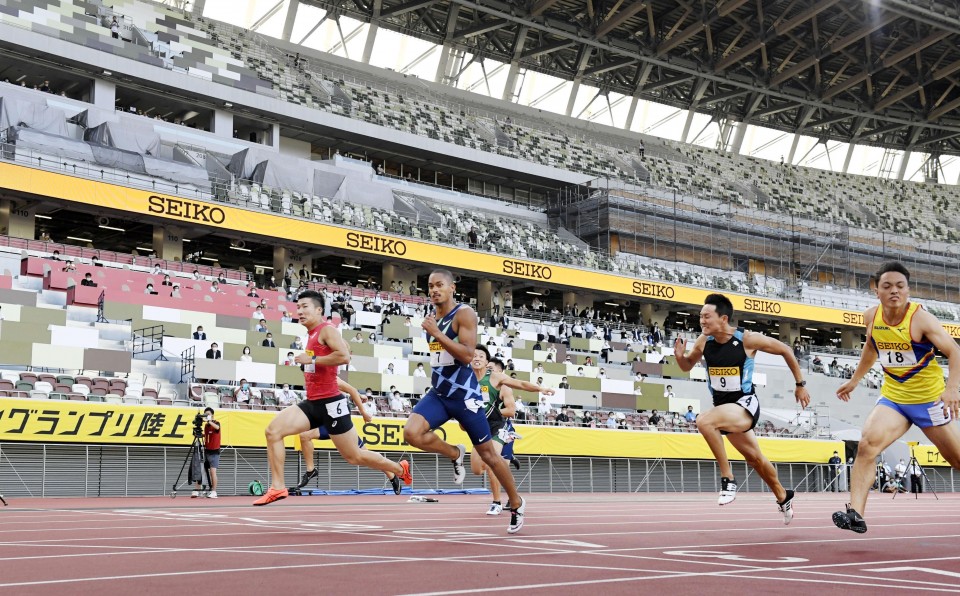 File photo taken in August 2020 shows an athletics meet taking place without spectators at Tokyo's National Stadium due to the coronavirus pandemic . (Kyodo)

The heads of the Tokyo Games' organizing bodies agreed Wednesday to decide by the end of March whether to allow overseas spectators. The organizers will then make a call in April on how many spectators will be allowed into the venues.

"Considering the current situation, it is true that Japan and other countries are in a very difficult situation," Seiko Hashimoto, president of the Tokyo Olympic organizing committee, told reporters after their online meeting.

With most of the world still struggling to deal with the health crisis and more contagious variants of the virus spreading or yet to emerge, Japan may not have many answers for the spectator question, with medical experts saying it is unrealistic to expect full capacity crowds in the stands this summer.

Kentaro Iwata, a professor of infectious diseases at Kobe University, said the "most reasonable decision" is to hold the games without spectators, adding that "other options are not right from a medical standpoint."

"Since the Olympics are a global event, it is more important to consider the situation of infections around the world rather than just looking at the situation in Japan," Iwata said in a telephone interview.

"Having spectators is an impossibly difficult operation, so I think it is better not to do it. Especially, having visitors from overseas is a major hurdle," he said. 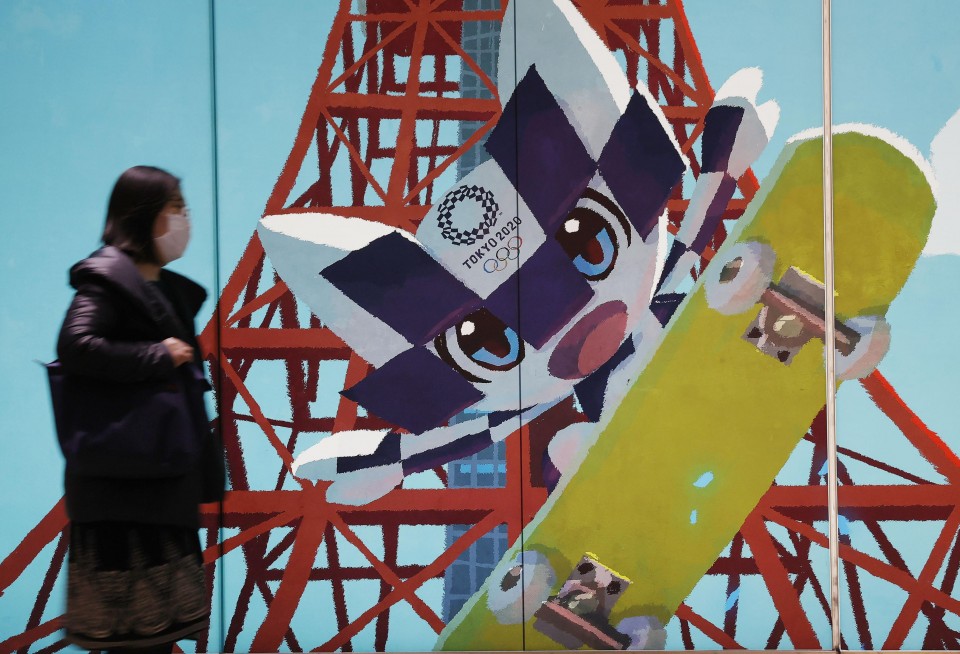 Japanese officials have been studying several options, such as only allowing people living in Japan to spectate, having limited crowds or even organizing events behind closed doors, according to people familiar with the matter.

Iwata said it is "unacceptable" to have overseas arrivals en masse at a time when Japan still lacks the capacity to effectively track and trace the new variants of the virus coming out of places like Brazil, Britain and South Africa.

He also opposed having reduced crowds comprised of Japan residents because it involves people from around the country traveling to and from Tokyo, the region hardest hit by the virus.

Under an interim report released in December by a government-led panel in charge of creating COVID-19 countermeasures for the Olympics, overseas visitors will be required to download a contact tracing app. But they will be free to use public transport, and be exempt from a 14-day quarantine requirement if they are from countries with relatively few virus cases.

While over 10,000 athletes will be permitted to go to venues and a few other locations, and will be tested at least every four days, the same strict measures do not apply to the larger number of spectators from foreign countries.

Before the postponement, it was estimated the Olympics would draw about 7.8 million spectators and the Paralympics about 2.3 million.

While Japanese organizers could request foreigners refrain from traveling outside of Tokyo during their visit, it is impossible to effectively restrict their movements.

Infections in Tokyo, which will host its second Summer Games following the 1964 edition, peaked in the beginning of January, logging over 2,000 new cases daily. The resurgence prompted the central government to declare a state of emergency for the capital and some other parts of the country in January.

Nationwide, new cases of the virus have been declining recently and Japan has pinned its hopes on the rollout of COVID-19 vaccines that started in mid-February to lessen the impact of the virus on the games. 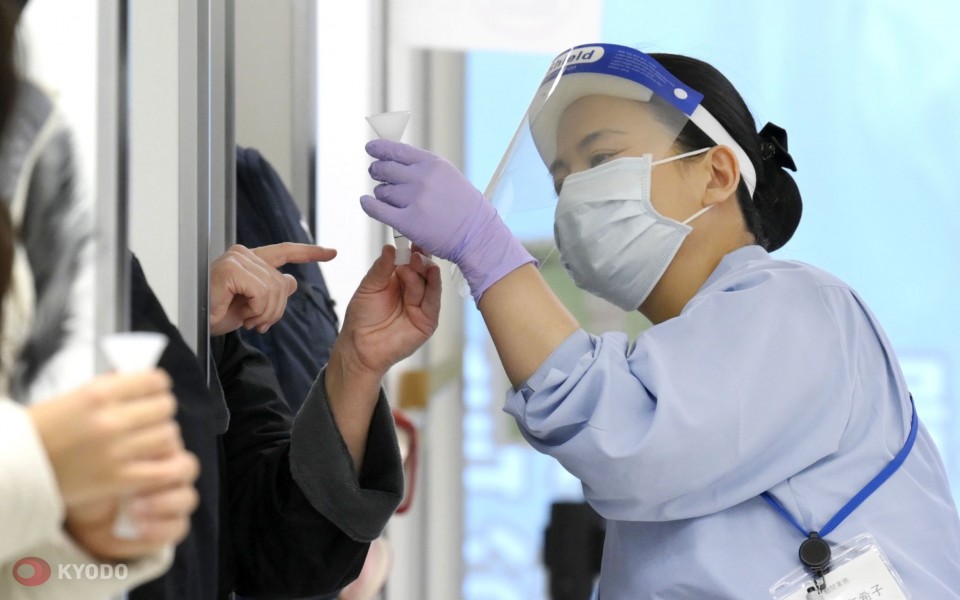 A quarantine official looks at a saliva sample from a passenger who arrived from overseas for an antigen test at Narita airport near Tokyo on Dec. 27, 2020, amid the coronavirus pandemic. (Kyodo) ==Kyodo

Hiroshige Mikamo, a professor at Aichi Medical University, said it would be "realistic," considering the current state of the pandemic, to restrict spectators to residents of Japan and set a cap on the number of people allowed at venues.

"The situation of new variants and infections around the world are two key points when making a decision for the Olympics," Mikamo said. "Deciding to have no spectators may be the easiest choice. But (the organizers) are at the stage of considering how to possibly admit spectators."

He said spectator limits put in place for the country's professional baseball and soccer leagues will serve as a "sample" when working toward a decision.

While the pandemic may be showing signs of abating, organizers have little time left to make a call on spectators because of the need to finalize planning for tickets, logistics and immigration procedures.

IOC chief Thomas Bach said in an interview with Kyodo News in January that having spectators "contributes greatly to the Olympic spirit, the Olympic atmosphere" but said the organizers have to be "flexible" to prioritize safety.

If organizers decide to hold the Tokyo Games behind closed doors or restrict spectators to Japan residents only, it will diminish the value of the Olympics and Paralympics, said Naofumi Masumoto, a visiting professor of Olympic studies at Tokyo Metropolitan University and Musashino University.

"Holding the events without spectators will take away the opportunity to promote cross-cultural understanding and cultural exchanges," he said, while emphasizing that safety is the priority when making a final call.

"It will be against the ideals of the Olympics, especially because children cannot interact with people from around the world," he said, making it more comparable to a world championships than the multi-sport extravaganza it should be.