No breakthrough seen in 1st U.S.-China high-level talks under Biden

U.S. Secretary of State Antony Blinken and his Chinese counterpart Yang Jiechi acknowledged that they had "candid" discussions during the two-day session in Alaska, which had kicked off with rare sharp rebukes in front of TV cameras on each other's policies and the international order they view as desirable. 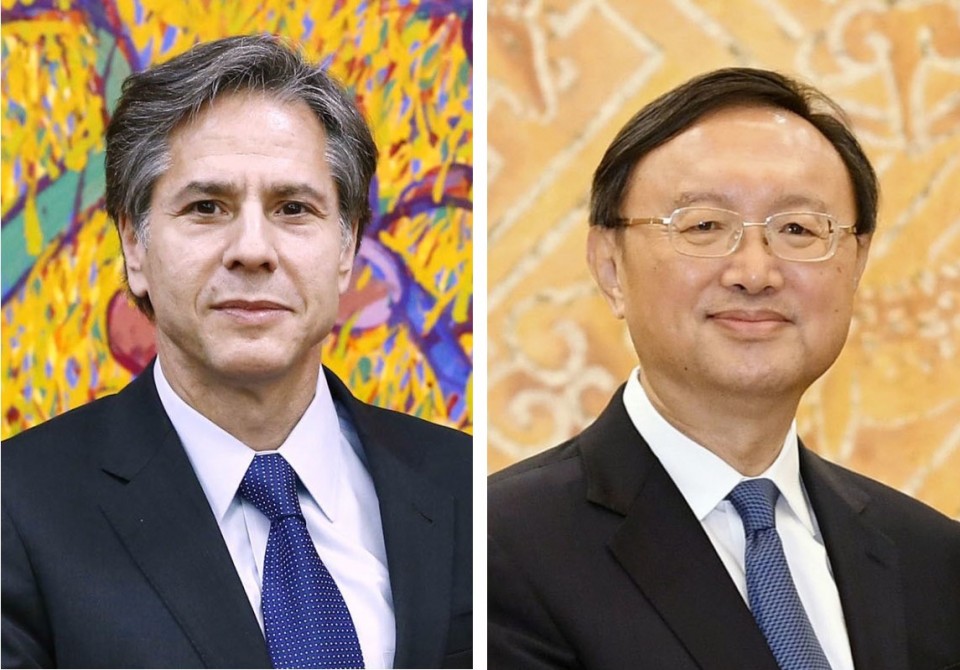 Blinken told reporters that he was able to attain his original objectives for the meeting, which were to convey the "significant concerns" the United States and its allies have about China's actions and behavior, and to lay out U.S. policies and priorities.

"We certainly know and knew going in that there are a number of areas where we are fundamentally at odds," including over Beijing's human rights abuses against the Muslim Uyghur minority in the Xinjiang region as well as its crackdown on Hong Kong and assertiveness toward Taiwan, Blinken said.

"And it's no surprise that when we raised those issues clearly and directly, we got a defensive response," he added.

But he noted that the two countries had "a very candid conversation" over the hours of tackling an expansive agenda and that their interests "intersect" on issues including North Korea and climate change.

On economics, trade and technology, the United States told China that it is reviewing the issues in close consultation with Congress, allies and partners and that it will move forward in a way that "fully protects and advances the interests" of American workers, according to Blinken.

Yang, who is China's top diplomat, summed up the dialogue as "candid, constructive and helpful," but said there were "still some important differences between the two sides," according to Chinese state-run Xinhua News Agency.

Chinese Foreign Minister Wang Yi, who also attended the talks, told reporters that China told the U.S. side "not to underestimate" Beijing's determination to defend its sovereignty.

The Chinese delegation also said that the United States should stop meddling in China's "domestic affairs" including Hong Kong and sought the removal of sanctions imposed in connection with moves which the United States views as having undermined the autonomy of the territory, according to Xinhua.

The meeting underscored the intensifying rivalry between the United States and China, which the Biden administration has singled out as the only competitor potentially capable of combining its economic, diplomatic, military and technological power to mount a sustained challenge to a stable and open international system.

The Biden administration, however, has also signaled its readiness to explore areas of cooperation when it is in America's interest to do so.

China, for its part, has been eager to normalize bilateral relations after four years under the administration of Biden's predecessor Donald Trump resulted in a bruising tit-for-tat trade war and an escalation of confrontation on various fronts.

"The two sides should handle China-U.S relations in the principles of non-conflict, non-confrontation, mutual respect and win-win cooperation, so as to move forward the bilateral relationship on a sound and stable track," Yang said Friday, according to Xinhua.

The two countries agreed to continue their dialogue and communication, while deciding to establish a joint working group on climate change, the news agency said.

Biden's National Security Adviser Jake Sullivan, another participant of the meeting, told reporters that he had anticipated "tough and direct talks on a wide range of issues" and "that's exactly what we had."

"We were clear-eyed coming in, we're clear-eyed coming out, and we will go back to Washington to take stock of where we are. We'll continue to consult with allies and partners on the way forward and, of course, on issues ranging from Iran to Afghanistan through the normal diplomatic channels," he said.

In the run-up to the meeting with the Chinese officials, the Biden administration has engaged in a flurry of diplomatic activity between countries in the Indo-Pacific that share concerns over China's growing assertiveness in the region, such as Japan.

The Biden administration has particularly devoted its energy to revitalize long-standing alliances, which many feel have been undermined under the Trump administration, believing that doing so will help the United States counter China's rise more effectively.