With the turmoil in Myanmar showing no signs of abating a month after the coup, some Myanmar people living in Japan are urging their host country to suspend aid to the Southeast Asian nation as part of international pressure on the military to restore the democratically elected government.

In a bid to block arms supply to the Myanmar military from major providers China and Russia as violent crackdowns on anti-coup demonstrators continue, the expats are calling on Japan to lobby other U.N. members so the Security Council urgently imposes a global arms embargo on the junta led by Min Aung Hlaing, the army chief who ended Myanmar's decade-long democratic reform.

"We would like Japan to halt development assistance to the junta and press China to stop supplying weapons to the military. We hope such measures, together with U.S. sanctions, will compel the generals to reverse course," said Lae Lae Lwin, a Myanmar nurse working in Japan. 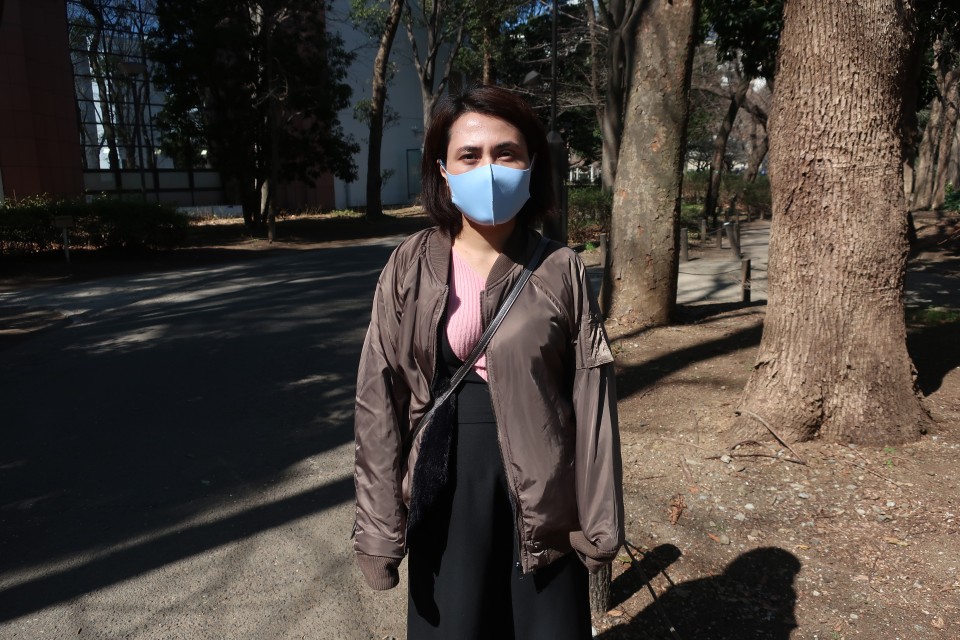 Lae Lae Lwin, a Myanmar nurse working in Japan, speaks in an interview with Kyodo News in Tokyo on Feb. 28, 2021. (Kyodo)

"We know Japan has developed ties with both Aung San Suu Kyi and the Tatmadaw," she said, referring to the ousted civilian leader and the armed forces. "But at this juncture, we want Japan to side with us, the people of Myanmar, not the Tatmadaw."

Min Aung Hlaing seized power after detaining Suu Kyi and other senior members of her party, the National League for Democracy, alleging fraud in November's election that gave the NLD a landslide victory. The election commission, however, said the vote was fair.

"The coup has not only shattered my dream to introduce Japan's advanced health care and nursing systems to Myanmar, but more importantly deprived people in Myanmar of hard-won freedom and democracy," Lae Lae Lwin, one of about 32,000 Myanmar residents in Japan, said in an interview in Tokyo.

She made the remarks when Myanmar security forces killed at least 18 protesters and injured over 30 others around the country on Sunday in the bloodiest day since the Feb. 1 coup, according to the U.N. Human Rights Office. 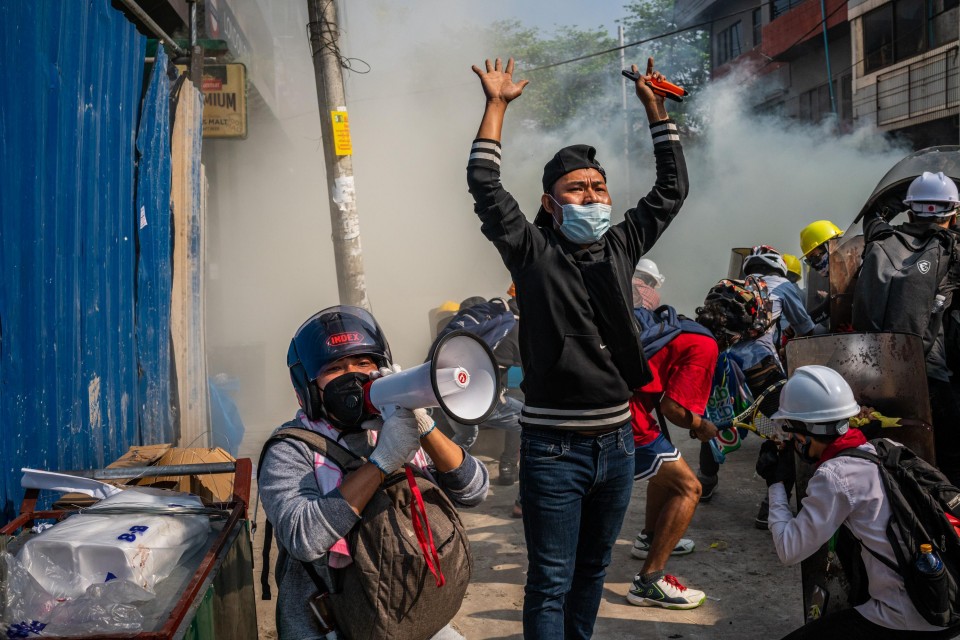 Protesters ask others to retreat after police fire tear gas on Feb. 28, 2021, in Yangon. (Getty/Kyodo)

Also on Sunday, some 2,500 Myanmar residents and others held a demonstration in front of the United Nations University in Tokyo, demanding that the junta immediately release Suu Kyi and relinquish power and calling for help from the world body and Japan. 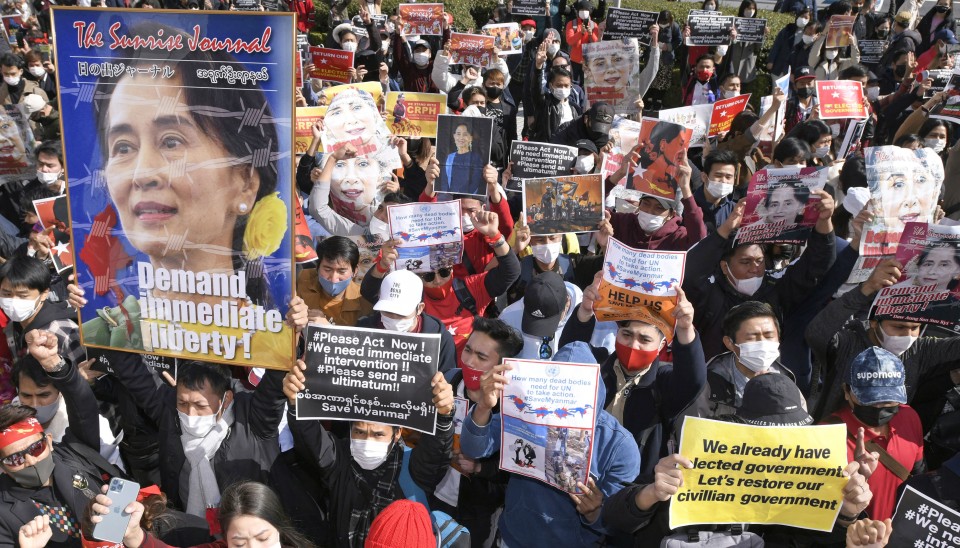 Myanmar people in Japan protest in front of the United Nations University headquarters in Tokyo on Feb. 28, 2021, against the military coup in their country on Feb. 1. (Kyodo)

The calls for Japanese action came as Prime Minister Yoshihide Suga's government is considering halting new official development assistance projects in Myanmar in response to the coup and the rising death toll from the use of force, including shootings, by the Myanmar security apparatus against peaceful protests.

In addition to limited sanctions imposed by the United States, Britain and Canada on Myanmar generals and military-linked businesses, the Japanese plan, if enforced, would deal a significant blow to the junta because Tokyo is by far the largest aid donor to Myanmar among developed countries.

Citing the political uncertainty and an expected drop in foreign direct investment, Sian Fenner, lead Asia economist for Oxford Economics, has forecast the military takeover is likely to cut Myanmar's economic growth this year to around 2 percent from an earlier estimate of 4.1 percent.

Meanwhile, Japan has no plans to suspend humanitarian aid -- delivered to civil groups in Myanmar via international institutions and nongovernmental organizations -- as well as ongoing official development aid projects, while officials continue to engage with the Tatmadaw so as to eventually persuade the generals to change their mind.

Under the shadow of a great power rivalry between the United States and China in the Indo-Pacific, Japan must conduct careful diplomacy regarding Myanmar because putting too much pressure with Washington would drive the junta closer to Beijing, which is seeking to gain access to the Indian Ocean via its strategically important neighbor.

While Washington expects Tokyo to use its connections with the Myanmar armed forces as leverage, President Joe Biden's administration has signaled additional U.S. sanctions amid speculation that the generals may shrug off pressure because they are used to being sanctioned and isolated from the international community.

"The United States and Japan have to coordinate their approaches -- a good cop and a bad cop approach," said Kavi Chongkittavorn, a former editor-in-chief of the Myanmar Times who is now a senior fellow for security and international studies at Chulalongkorn University in Bangkok.

Referring to Yohei Sasakawa, Japan's special envoy for national reconciliation in Myanmar, and Japanese Ambassador to Myanmar Ichiro Maruyama, Kavi said, "Make full use of Mr. Sasakawa and Mr. Maruyama, who both have close ties with the Tatmadaw."

"No threatening voices would work, but Japan should send a strong message to leave Aung San Suu Kyi alone," he said in an email.

China has not condemned the coup and emphasized other countries should not interfere in Myanmar's internal affairs, raising the suspicion that Beijing may be propping up the junta to boost its clout in the country as a major arms supplier, aid donor and trading partner.

China also expressed support for diplomacy by the Association of Southeast Asian Nations, which Lae Lae Lwin and other supporters of Suu Kyi's party, however, fear could legitimize the junta.

They have grown concerned that the 10-member ASEAN, of which Myanmar is a member, may acquiesce with the junta's call for an election in a bid to scrap the Nov. 8 election, which dealt a crushing defeat to a military-backed party.

"That would be a complete dismissal of the will of the Myanmar people. Have they not seen enough of the protests?" Lae Lae Lwin said. "It's a matter of whether ASEAN stands with us or the Tatmadaw."