Japanese foreign and defense ministers and their U.S. counterparts expressed Tuesday "serious concerns" about a Chinese law that took effect recently enabling its coast guard ships to fire on vessels around the Beijing-claimed Senkaku Islands in the East China Sea.

They agreed at their security meeting in Tokyo to enhance bilateral and multilateral exercises and training to maintain the alliance's operational readiness and deterrent posture to address China's "aggressive and coercive behavior," especially in the East and South China seas, the ministers said in a joint press conference after the meeting. 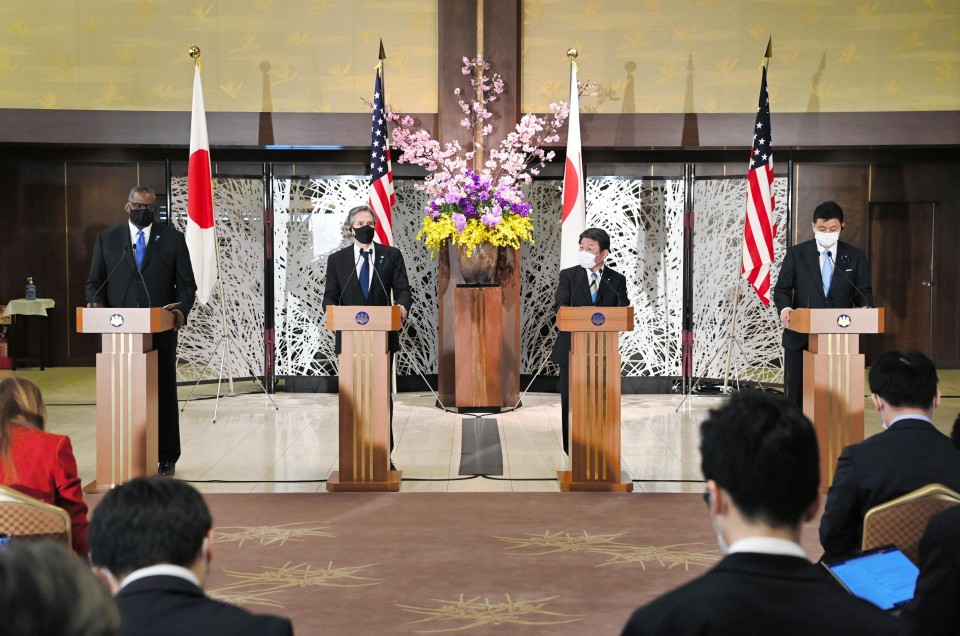 Japan, for its part, has looked to assurances from the United States for its defense amid growing concerns posed by the Chinese coast guard law implemented on Feb. 1.

Chinese coast guard vessels have repeatedly intruded into Japanese waters around the Senkaku Islands in an apparent attempt to undermine Tokyo's control.

"The ministers...expressed serious concerns about recent disruptive developments in the region, such as the China Coast Guard Law," said the joint statement issued after their talks, which also involved Japanese Foreign Minister Toshimitsu Motegi and Defense Minister Nobuo Kishi.

"The United States and Japan remain opposed to any unilateral action that seeks to change the status quo or to undermine Japan's administration of these islands," the statement said in reference to the group of uninhabited islets.

It is rare for a joint statement by the two countries to single out China, a sign that Tokyo and Washington have raised their alert level over the threat Beijing poses militarily and economically and to its violations of human rights. 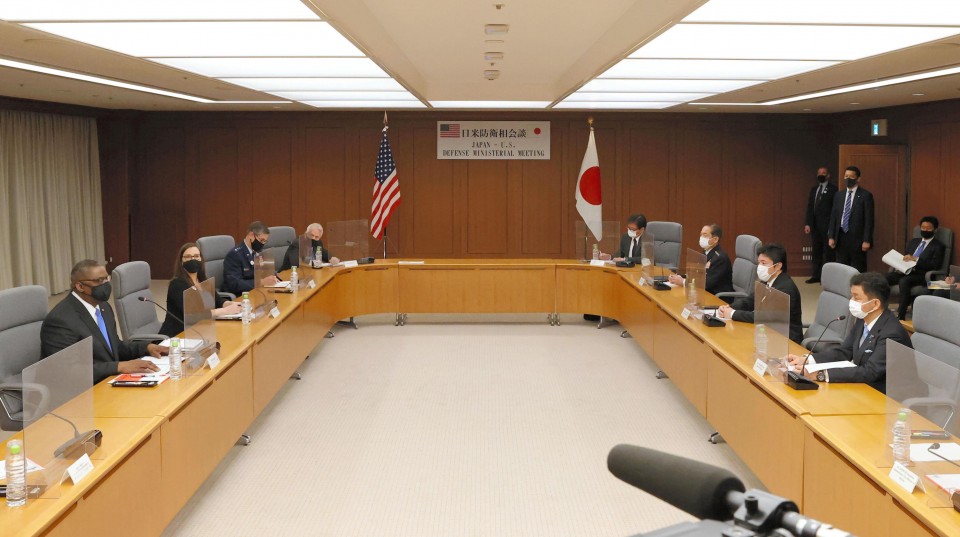 The statement also explicitly laid out that the Senkaku Islands fall within the scope of Article 5 of the bilateral security treaty, with the United States assuring its "unwavering commitment" to come to Japan's defense in the event of a conflict there.

"The Self-Defense Forces and the U.S. military have been conducting many exercises in (Japan's) southwest, including near the Senkakus. We want to continue building on these drills and show that Japan and the United States are acting together," Kishi told the joint press conference.

The Japanese Air Self-Defense Force said the same day four of its F-15 fighters and four U.S. F-35B stealth fighters together with a tanker aircraft conducted a joint aerial defense drill on Monday near the Senkakus in the East China Sea.

In the statement, Japan and the United States also reiterated their objections to "China's unlawful maritime claims and activities in the South China Sea."

Beijing has been promoting the militarization of outposts in the disputed areas of the South China Sea, parts of which are also claimed by Brunei, Malaysia, the Philippines, Taiwan and Vietnam.

The Japanese and U.S. officials also agreed to convene another two-plus-two meeting later this year.

Following the latest two-plus-two meeting, the first of its kind since April 2019, the U.S. secretaries met with Japanese Prime Minister Yoshihide Suga. The premier has been invited to the White House in the first half of April, when he is set to become the first foreign leader to hold talks with Biden in person. 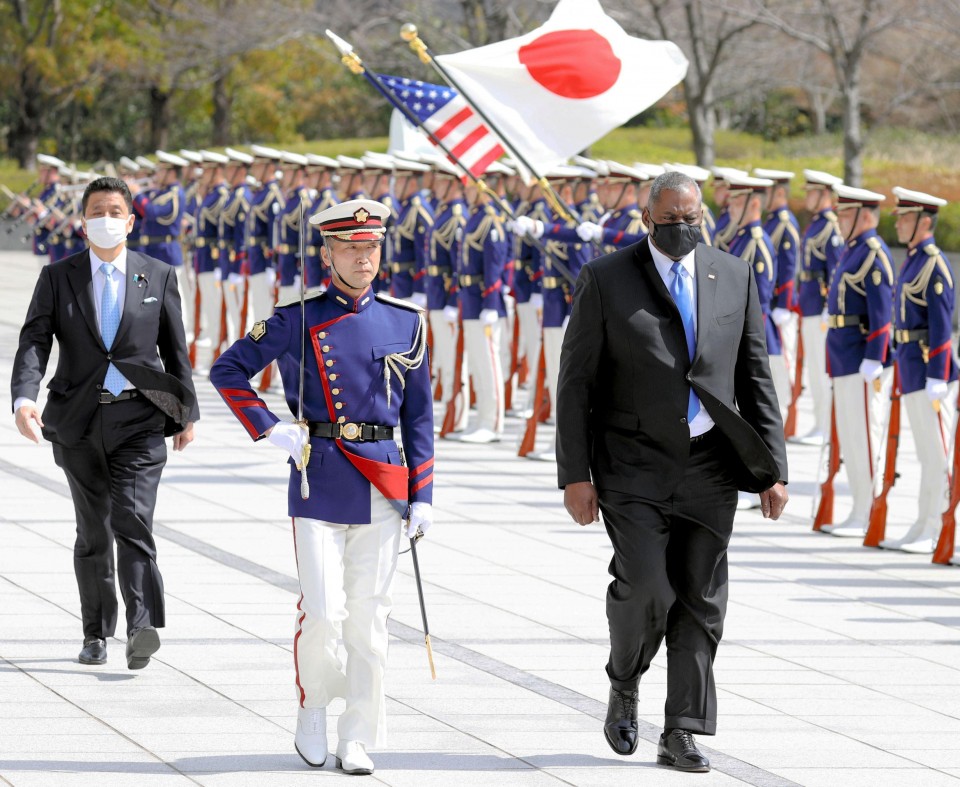 In the two-plus-two talks, the ministers also shared "serious concerns" regarding the human rights situation in Hong Kong and China's far-western Xinjiang region, where the Muslim Uyghur minority lives.

The ministers reaffirmed their commitment to the denuclearization of North Korea and urged Pyongyang to abide by its obligations under U.N. Security Council resolutions.

Blinken told the press conference that the Biden administration is currently conducting, in consultation with Japan and South Korea, a "thorough" review of U.S. policy toward the reclusive nation that is expected to be completed in "the coming weeks."

He also said the United States will cooperate in resolving the issue of past abductions of Japanese nationals by North Korea.

After visiting Japan, Blinken and Austin will travel to Seoul on Wednesday for talks with their South Korean counterparts.

Following the two-nation Asian tour, Blinken is scheduled to meet with Yang Jiechi, a member of the Communist Party of China's Political Bureau and the country's top foreign policy official, and Chinese Foreign Minister Wang Yi in Alaska on Thursday.

The Alaska meeting will be the first in-person contact between senior officials of the two countries since the Biden administration took office. 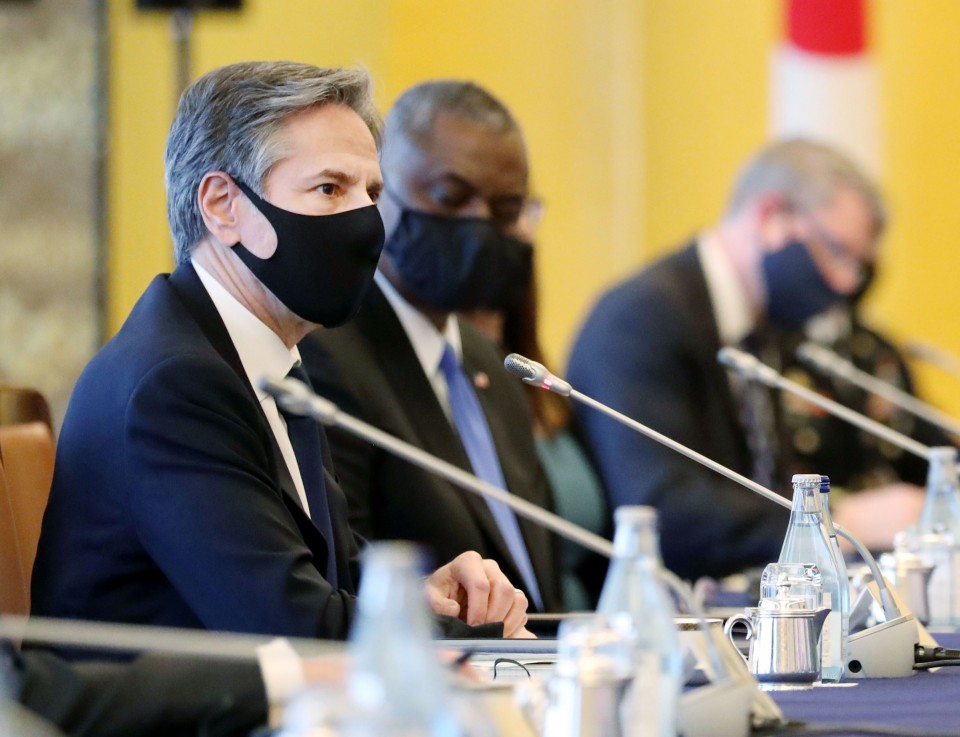 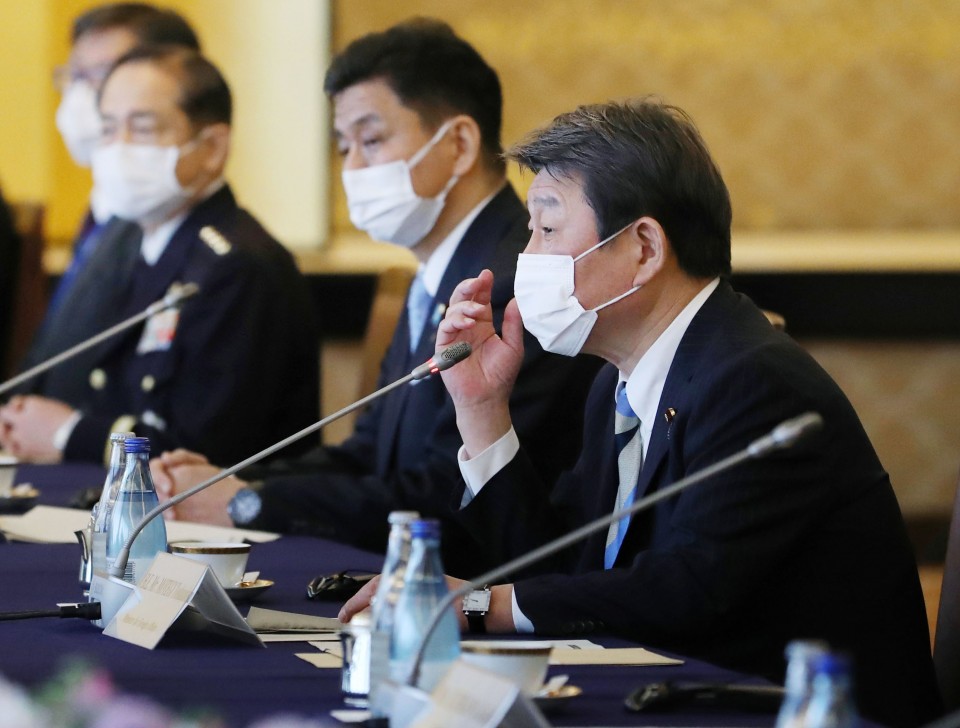 The following is the gist of a joint statement issued Tuesday by the foreign and defense chiefs of Japan and the United States after their so-called two-plus-two meeting in Tokyo.

-- say their alliance remains cornerstone of peace, security and prosperity in Indo-Pacific region.

-- oppose any unilateral action to change status quo or to undermine Japan's control of Senkaku Islands.

-- call for peace and stability in Taiwan Strait.

-- agree issue of Japanese nationals abducted by North Korea decades ago needs to be resolved immediately.

-- stick to current plan to relocate U.S. Futenma air base within Japan's island prefecture of Okinawa.

-- highlight importance of cooperating also on new domains, including space and cyber.

Top U.S., China diplomats to meet in person in Alaska on March 18