The president of messaging app provider Line Corp. said Tuesday that data of its users in Japan, now being stored in South Korea, will be transferred to databases in the country to better protect customers' personal information in the wake of exposure of such data to a Chinese affiliate without user consent.

Data management of Line, used by over 86 million of Japan's some 126 million people, is now under increasing scrutiny after the firm said last week that such users' data stored in Japan had been accessed by technicians in China without informing them as required by law. 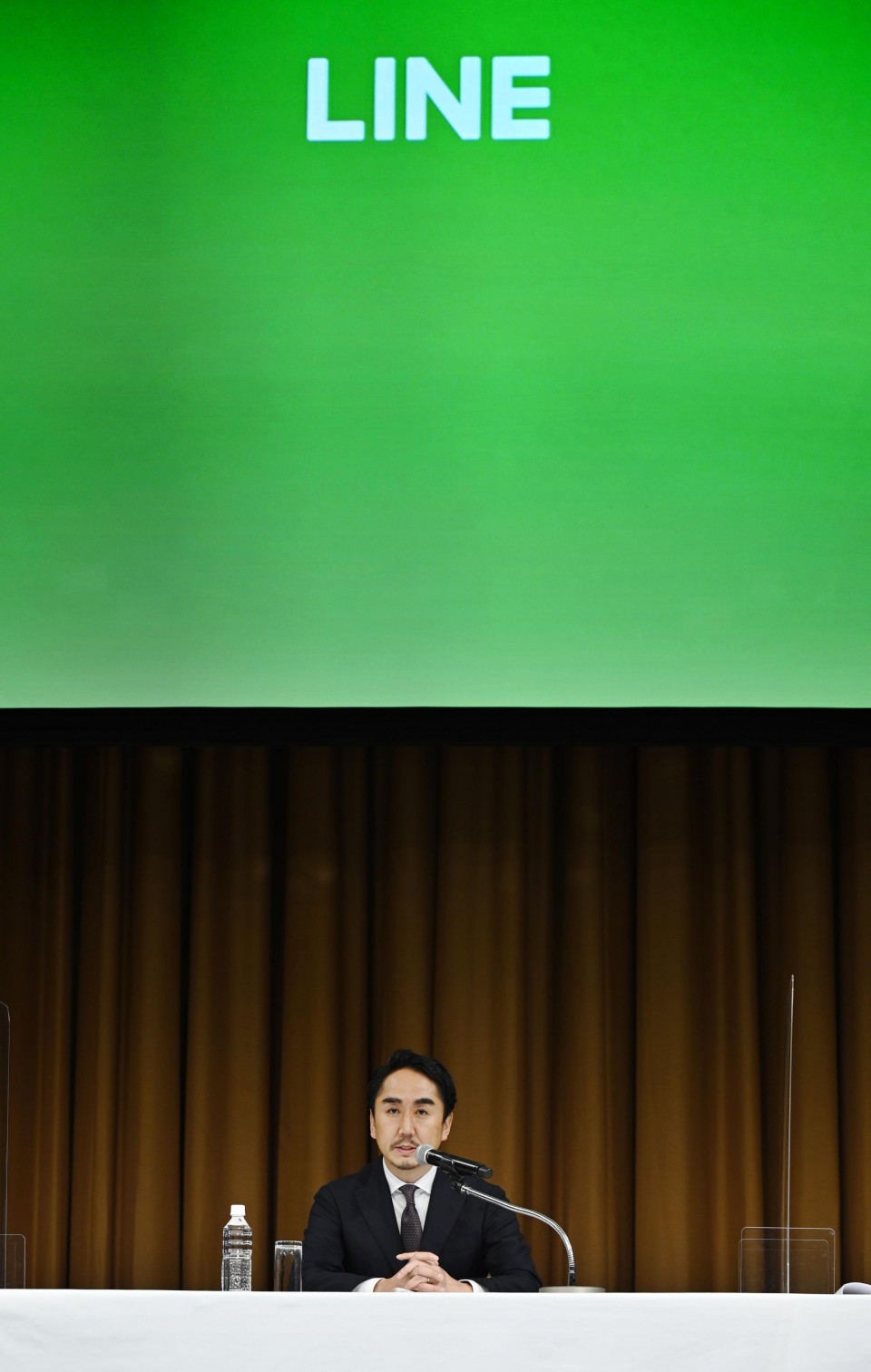 Takeshi Idezawa, president of messaging app provider Line Corp., meets the press in Tokyo on March 23, 2021. All data of Line users will now be transferred to Japan and stored in the country to better protect its customers' personal information, Idezawa said after data had been accessed by technicians in China without users being informed as required by law. (Kyodo) ==Kyodo

It has raised concerns over privacy and national security as data on personal, corporate and other users in Japan could have been transferred to the Chinese government.

"The company has blocked access from China to its database," Line President and CEO Takeshi Idezawa said in a press conference Tuesday, apologizing for causing inconvenience and anxiety to app users. He added the company has shut down its development work in China.

The issue over data management also goes beyond China. Line has said photos and video footage posted by its users were also stored in South Korea.

Idezawa said that by June all files including users' photos and video footage will be transferred from South Korea to Japan.

In its data protection guideline, Line has said that customers' personal information can be sent overseas but did not specify the name of any foreign country despite being required to do so under a legal change last year.

"We failed to adequately communicate with our app users," Idezawa said. Line said it will revise the guideline next week to specify the name of any country to which customers' personal information will be delivered.

Joji Shishido, a University of Tokyo graduate-school professor, criticized the app provider's data management at the first meeting of a third-party panel, held the same day, to investigate details of the matter.

"It goes beyond (the company) having a flawed privacy policy to having undermined its social credibility," Shishido said.

The app operator said last Wednesday four technicians in its Chinese affiliate had accessed its database at least 32 times. They were able to see users' names, phone numbers and email addresses, along with messages reported by users as inappropriate from around the summer of 2018.

"We failed to keep up with changes in China," said Idezawa, as the Chinese government has recently tightened its legal control over personal information.

Many public organizations including Japanese government ministries are using the Line app as a communications tool with the public.

Although Line has said it has confirmed no improper data use in China, some municipalities including Osaka city and Kagawa Prefecture in western Japan have temporarily suspended their use of the app amid security concerns.

The Line app has also been popular as a main social communications tool in Taiwan, Thailand and Indonesia since launching its service in June 2011.

The Japanese government's Personal Information Protection Commission, Financial Services Agency and the telecommunications ministry have requested that Line and its parent company Z Holdings Corp. report details of the incident.

Line users' info accessed by technicians in China without consent