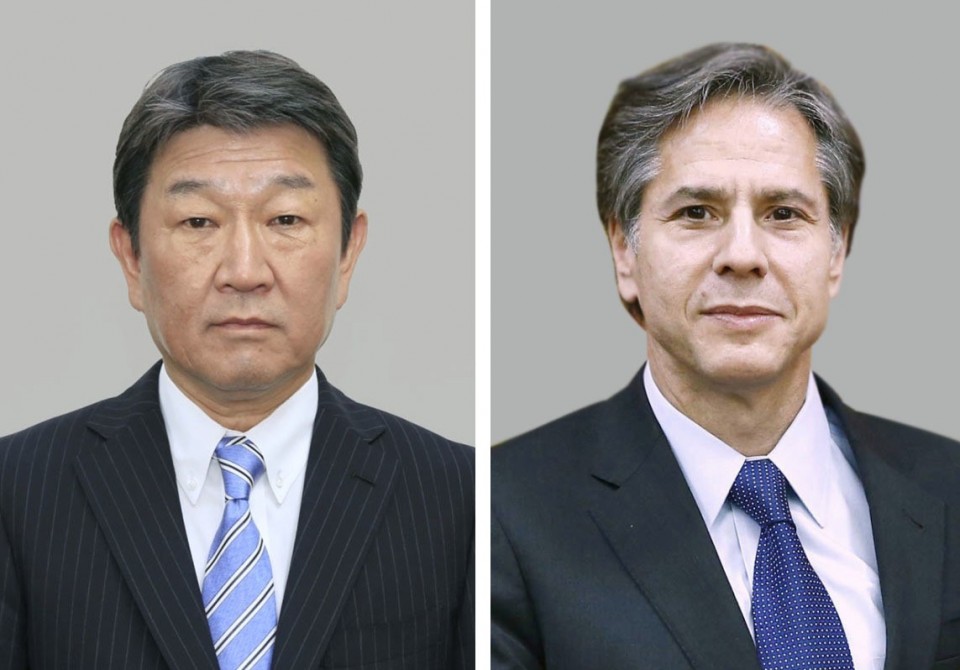 The planned in-person talks, to be held in the midst of the coronavirus pandemic, are expected to showcase the robust alliance between the two countries amid China's increasing assertiveness in the Indo-Pacific region, including around the Japan-controlled Senkaku Islands in the East China Sea.

Japan and the United States last held a two-plus-two security meeting in Washington in April 2019.

Blinken and Austin will also hold one-on-one talks with Motegi and Kishi, respectively, the sources said, adding that the U.S. officials are considering traveling on to South Korea after their Japan visit.

The two governments later announced that their senior foreign and defense officials held discussions via videoconference on Thursday and affirmed their close coordination to maintain "a free and open Indo-Pacific" and enhance deterrence capabilities.

Their press releases did not mention the envisioned visit by Blinken and Austin to Japan.

Both sides reiterated their strong opposition to unilateral attempts to change the status quo by force or coercion in the East and South China seas and shared their "deep concerns" over Beijing's controversial coast guard law, according to the two governments.

The law, implemented on Feb. 1, explicitly allows the Chinese coast guard to use weapons against foreign ships it sees as illegally entering China's waters, raising concerns that it could result in an escalation of maritime disputes.

Chinese coast guard vessels have repeatedly intruded in Japanese waters around the Senkaku islets, claimed by Beijing and called Diaoyu, in an apparent attempt to undermine Japan's control over them.

Blinken said Wednesday in his first major foreign policy speech since becoming Washington's top diplomat that dealing with China will be "the biggest geopolitical test" of this century and underscored the Biden administration's emphasis on alliances and multilateralism.

Suga and Motegi showed eagerness to visit the United States in their respective telephone talks with Biden and Blinken in January, but such trips have not been realized due to the Biden administration's reluctance to accept foreign guests amid the pandemic.

Austin, meanwhile, expressed his readiness to visit Japan at an early stage in his telephone talks with Kishi in January.