China on Friday set an annual gross domestic product target of "over 6 percent," marking such a goal for the first time in two years at its parliament after the country became the only major economy to post positive growth last year amid the novel coronavirus outbreak.

Beijing underscored its confidence in the nation's economic rebound from the impact of the virus's spread, given that China's economy has shown signs of a V-shaped recovery since the increase in new infections apparently peaked in late February 2020. 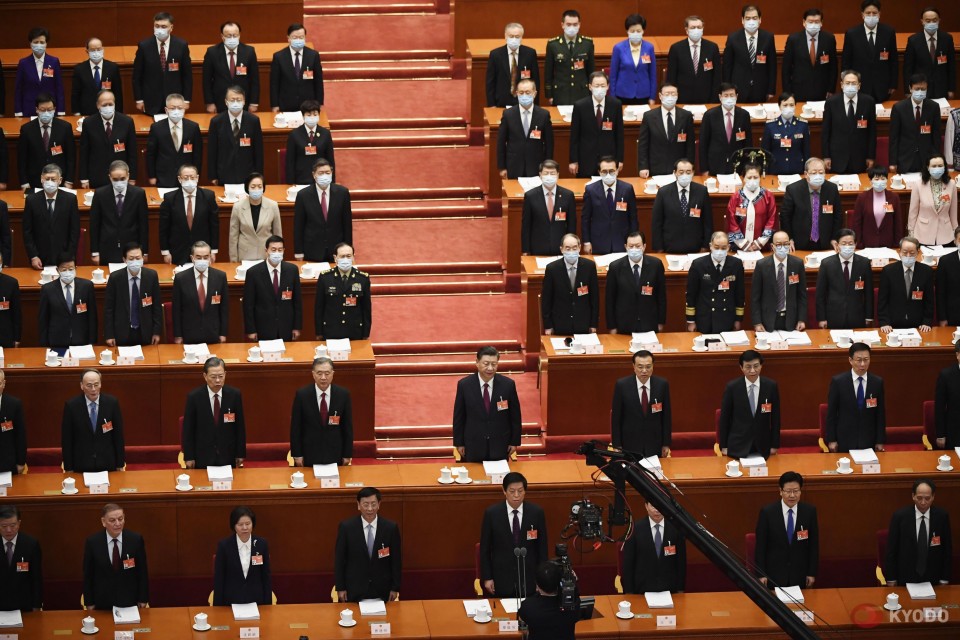 Participants sing the Chinese national anthem at the opening ceremony of the National People's Congress at the Great Hall of the People in Beijing on March 5, 2021. President Xi Jinping is seen in the center. (Kyodo) ==Kyodo

Vowing to prevent "external forces" from meddling in Hong Kong and Taiwan issues, China also said it will fulfill the "Chinese dream of national rejuvenation" on the 100th anniversary of the founding of the ruling Communist Party this year.

Analysts say concern may mount that China's nationalism will grow further at home, and the leadership of President Xi Jinping will step up measures to boost its influence on the region and the world on the back of its economic clout.

China did not set an economic growth target for 2020, citing "great uncertainty" over the impact of the pandemic on the world's second-largest economy.

"In 2021, China will continue to face many development risks and challenges, but the economic fundamentals that will sustain long-term growth remain unchanged," Premier Li Keqiang said on the first day of the annual session of the National People's Congress.

"We should stay confident, meet challenges head-on, and consolidate the foundation for economic recovery to ensure sustained and healthy economic and social development," Li said at the session of China's parliament, scheduled to end next Thursday.

China's target for 2021 is lower than the economic growth rate projected by the International Monetary Fund.

The Washington-based institution said in its update of the World Economic Outlook report released in late January that China's economy is estimated to grow 8.1 percent this year as the nation has effectively contained the virus that causes the COVID-19 disease.

On Friday, China also announced its new five-year development plan through 2025. But the Asian power omitted GDP goals, only saying annual targets for economic growth will be set "in light of actual conditions."

It is rare for the Chinese government not to set GDP goals for the five-year plan. 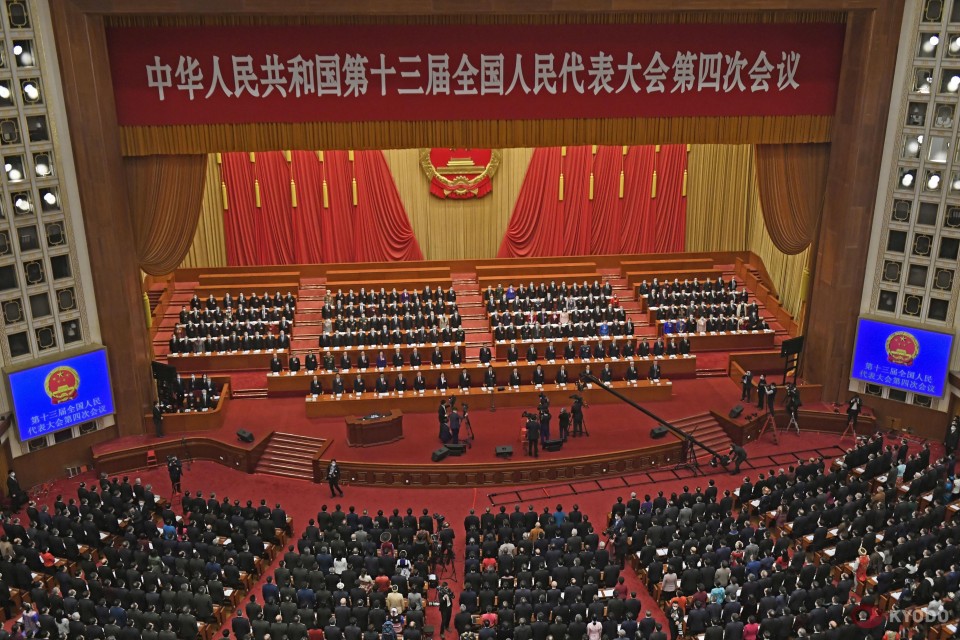 The opening ceremony of the Chinese National People's Congress is held at the Great Hall of the People in Beijing on March 5, 2021. (Kyodo) ==Kyodo

Li, meanwhile, said that China would "resolutely guard against and deter external forces' interference in the affairs of Hong Kong," the special administrative region where Beijing has been criticized for its crackdown on political dissent.

China on Thursday pledged to review the electoral system in Hong Kong in the latest move threatening democracy, freedom and human rights there.

At the National People's Congress last year, China passed a resolution to introduce a security law to crack down on what Beijing views as subversive activity in Hong Kong. The controversial legislation was enacted in late June 2020.

Under China's "one country, two systems" policy, the former British colony was promised it would enjoy the rights and freedoms of a semiautonomous region for 50 years following its return to Chinese rule in 1997.

Taiwan and mainland China have been separately governed since they split as a result of a civil war in 1949. Their relationship has deteriorated under independence-leaning Tsai Ing-wen, who has served as Taiwan's president since 2016.

In Taiwan, fears are lingering that the Chinese government will try to achieve its cherished goal of reuniting the democratic, self-governed island with the mainland by force if needed.

The Eastern Theater Command, responsible for the Taiwan Strait and the East China Sea, also joined the exercises, suggesting that Beijing may be aiming to seize the Taiwan-controlled Pratas Islands in the South China Sea.

China said Friday that it will increase its military spending in 2021 to 1.36 trillion yuan ($210.14 billion), a 6.8 percent expansion on last year, in a report delivered to parliament.

The rate of growth was faster than the 6.6 percent year-on-year rise in 2020. 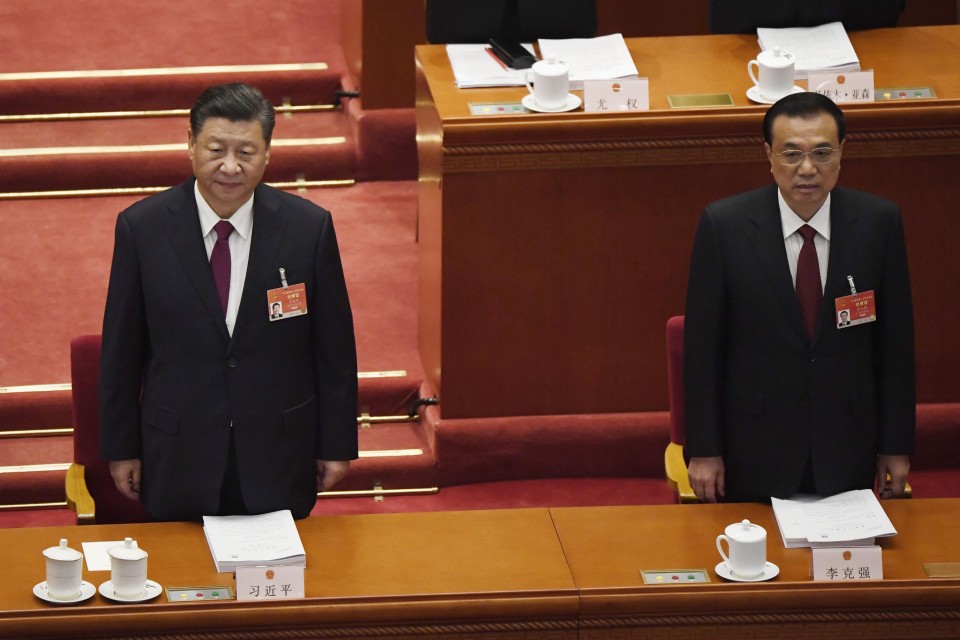 Chinese President Xi Jinping (L) and Premier Li Keqiang attend the opening ceremony of the National People's Congress at the Great Hall of the People in Beijing on March 5, 2021. (Kyodo) ==Kyodo