Less than two months into the presidency of Joe Biden, his administration has made clear its desire to tap into the potential of the Quad -- a grouping made up of the United States, Japan, Australia and India -- as a counterweight to China's rise.

At the Quad's first-ever summit meeting on Friday, Biden pitched the multilateral forum as "a vital arena" for cooperation in the Indo-Pacific, raising hopes for increasing its role in the region to address issues ranging from the coronavirus pandemic and climate change to technology and maritime security. 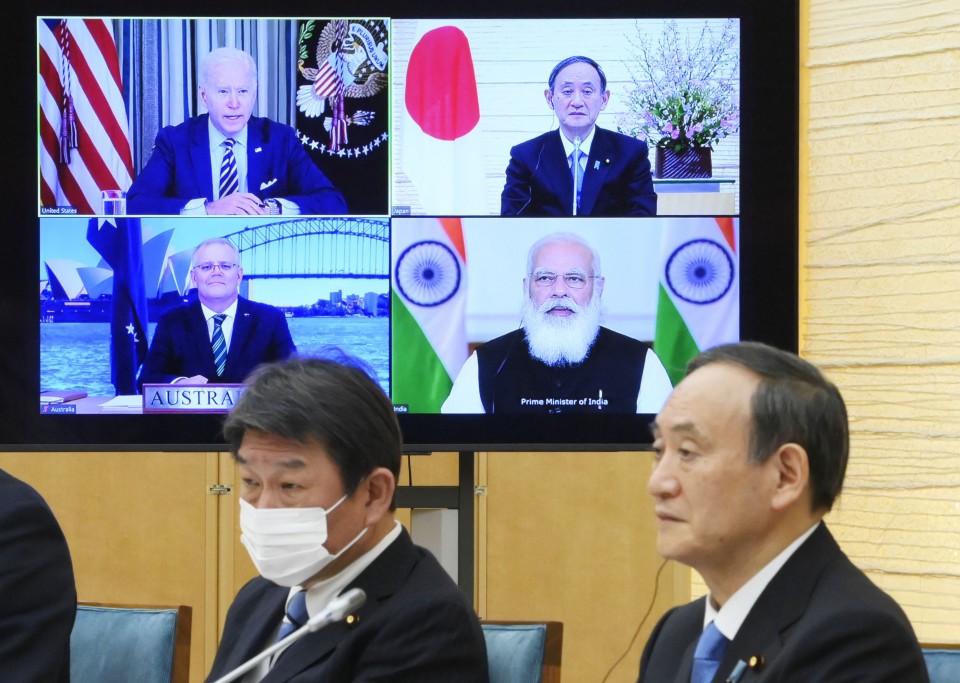 But whether the grouping can gain standing as a meaningful regional architecture remains to be seen.

The quadrilateral framework originally arose as part of efforts to coordinate disaster relief responses to the 2004 Indian Ocean earthquake and tsunami. After a period of hiatus, it was revived in 2017 and its focus in recent years has been advancing a "free and open Indo-Pacific" in the face of China's growing assertiveness.

When the Quad was resurrected in 2017 on the sidelines of then U.S. President Donald Trump's visit to Asia, many observers had few expectations of it, thinking it may be a mere talking shop without accomplishing much, Derek Grossman, a senior defense analyst at U.S. research organization Rand Corporation, said.

"And I think that all of that now leading up to Friday's event has been proved to be just not true. The Quad has made enormous progress," the expert on Indo-Pacific security issues said.

Much of the groundwork appears to have been laid by the Trump administration, which has seen the four powerful economies and democracies having the capacity to push back against Beijing amid an intensifying U.S.-China rivalry on numerous fronts.

Grossman said a summit meeting was "the next logical step" after foreign ministerial meetings began to be held from 2019, but noted that what has drawn the four countries closer together has been that they are "genuinely" concerned that "China's assertiveness continues to tick up throughout the Indo-Pacific."

An escalation in maritime disputes is feared in the East China Sea, where the Japanese-controlled, Chinese-claimed Senkaku Islands are located, with Beijing recently implementing a law that explicitly allows its coast guard to use weapons against foreign ships it sees as illegally entering China's waters.

India and China are at loggerheads over a disputed border region in the Himalayas, while Australia and China have seen a rise in trade tensions in the wake of the pandemic.

By working together, the four countries are expected to have a "significant amount of strategic heft," Grossman said, as can be seen from an agreement reached on Friday to supply up to 1 billion coronavirus vaccine doses to the region by the end of 2022.

"India is the pharmacy of the world...in terms of manufacturing, and so vaccine distribution, if you have India involved, that's a really positive thing," he said.

But Grossman said that he is still doubtful that the Quad would actually bring an end to China's assertive and coercive activities in the region.

"China's behavior has only got worse even with the Quad talking about China," he said. "It's not a silver bullet in any way, but it's just another mechanism to demonstrate resolve and willingness to work together (against China)."

Meanwhile, the U.S. labeling of the Quad as a group of "strong democracies" may be called into question, as India is seen to be descending into authoritarianism by rights group Freedom House.

That could be a concern for the Biden administration which has prioritized human rights and democracy promotion not only in the Indo-Pacific but globally.

Questions also remain as to how the Quad fits within the region's already complex political architecture, where alliances and multilateral groupings exist. Some experts have warned that too much expectation and attention on the Quad may make the Association of Southeast Asian Nations feel pushed aside.

Abraham Denmark, director of the Asia Program at the Woodrow Wilson International Center for Scholars, said he thinks the Quad does not detract from the importance or significance of U.S. alliances or of ASEAN.

But he said the United States may need discussions with countries such as South Korea that are not part of the Quad on what role the country can play in the Indo-Pacific, while stepping up engagement with ASEAN.

For now, the United States appears to be focused on delivering from the Quad cooperation what it calls "concrete" results that can be felt by other countries in the region, starting from the work to expand vaccine production for Southeast Asia nations and elsewhere that are facing shortages.

"The thing that has brought all these countries together (on the vaccination production) is an insistence on providing practical, concrete help to people in need," a senior U.S. administration official said.

"And so if the Quad cannot do that, if it can't address constructively these issues, we will quickly lose relevance and will be strategically insignificant," he said.