FEATURE: A Japanese woman's story of love from war-torn Syria

Becoming the first Japanese woman to scale K2, the world's second-highest peak, was a life-altering experience for Yuka Komatsu, but it wasn't due to the sense of achievement of having survived the deadly summit.

Rather, it was seeing the way villagers around the mountain had integrated their lives with nature, a scene recalling the way her own grandparents had worked in rice fields, that set the photographer on a new path leading eventually to marriage to a man who had become a refugee of the Syrian civil war.

Komatsu made the ascent of the 8,611-meter "savage mountain" in the Karakoram Range, straddling Pakistan and China and considered arguably the most dangerous climb in the world, in 2006 after graduating from Tokai University, where she was the only woman in the alpine club.

More than two years later, in October 2008, at the age of 26, Komatsu found herself under a scorching sun headed for a desert in Palmyra, an ancient city located in central Syria, to pursue her dream of "living on the land with nomads while expressing their world through my photos." 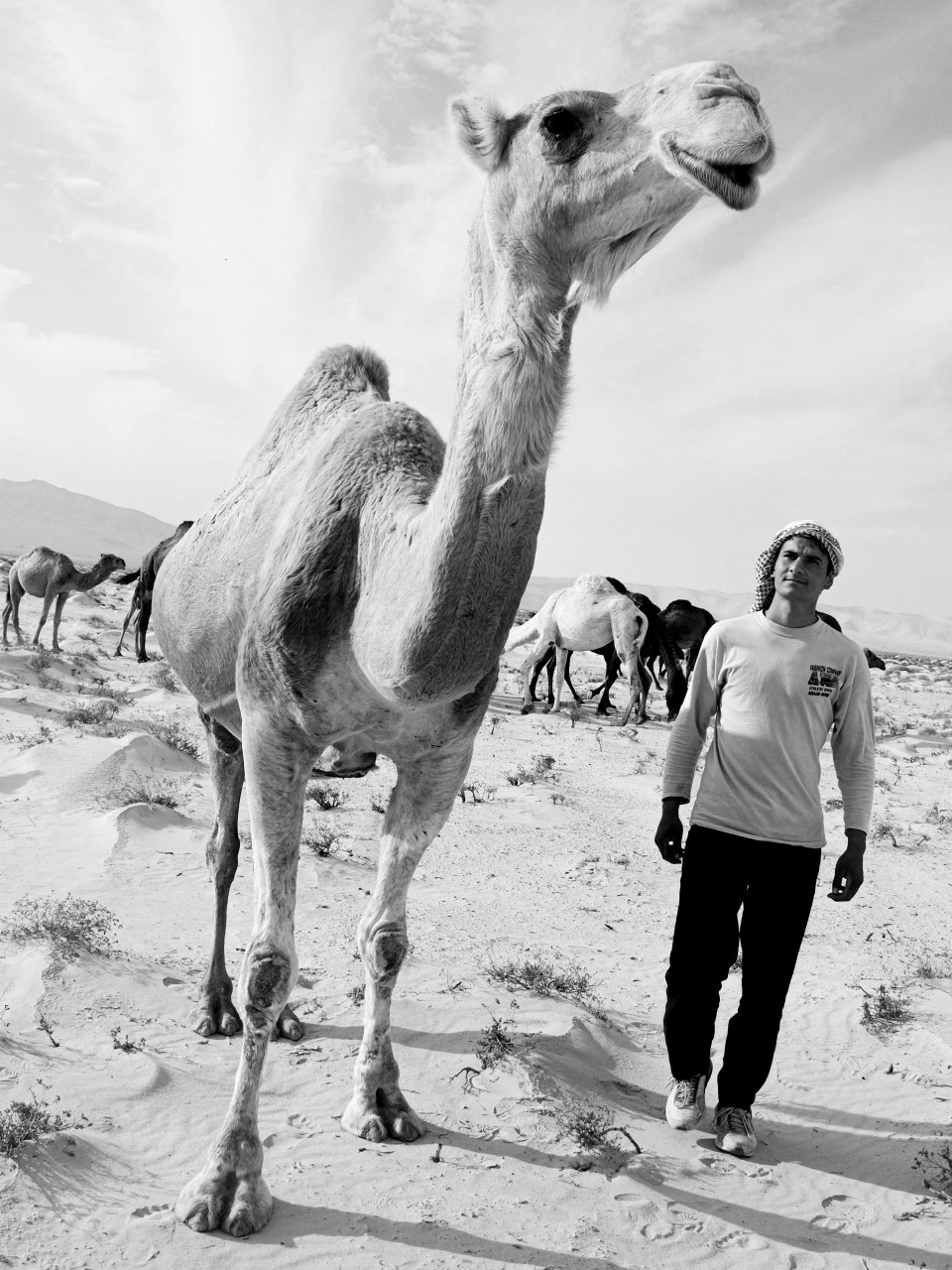 Abdallattef Radowan walks beside a favorite camel in his caravan in the Syrian desert in November 2009. (Photo courtesy of Yuka Komatsu)(Kyodo)

Far away over the wind-swept sand, Komatsu spotted a caravan of camels in the oasis. As she approached, an Arab man wearing a jacket looked at her curiously. "I'd like to take your photo," Komatsu requested, using gestures as the man consented with a nod. Five years later, Komatsu and Abdallattef Radowan, five years her junior, would become lifelong companions through marriage.

Komatsu had become fascinated by a lifestyle of living off the land, recalling her own upbringing in Akita, northeastern Japan, where it was natural to "gather edible wild plants in the spring and mushrooms in the fall."

At Akita Kita High School, she joined the mountaineering club before enrolling at Tokai University in Kanagawa Prefecture, near Tokyo, whose alpine expedition club members have achieved numerous successes in the Himalayas, including Tatsuya Aoki, who became the youngest person to reach the K2 summit at the age of 21 with Komatsu on Aug. 1, 2006.

"Freshmen were slaves, and seniors were gods," Komatsu said, recalling the strict hierarchy in the world of mountaineering.

Faced with repeated calls from the male club members to quit, Komatsu said she was rescued by the words of a senior member, who told her, "Men and women are just separated on the human side of things, but the mountains treat men and women equally. Humans don't have to build walls."

It was an awakening she would call on later, leading to her miraculous achievement of becoming only the eighth woman in history at the time to scale K2 at the age of 23. It was also a mantra she would use when challenges arose in her relationship with Radowan years later. "Is this a wall I have built myself, or not?" she would come to ask herself.

Surrounded by desert as far as the eye can see, Palmyra gained prominence as an outpost of the Roman Empire and a stop on the Silk Road trading route with its wealthy caravans. Radowan's family would travel back and forth between the city and the desert, making a living mainly by grazing camels which were part and parcel of nomadic life.

After Komatsu met Radowan, he would often talk to her about the desert's beauty, which changes with the seasons and time. "I felt everyday life is connected to the land," she recalled. She was moved and gradually felt her attraction grow for the Bedouin.

From 2009 onward, Komatsu began traveling to Syria every year, and the love-struck couple began thinking seriously of marriage "so we could be together," she said.

But several walls emerged before them.

Family is the core pillar of Arab culture, and one will often make personal sacrifices for the family's well-being and happiness. Marriage, moreover, between relatives is commonplace, and Radowan's family was opposed to the marriage from the start.

Around the same time, civil war broke out in Syria in March 2011, casting a dark cloud over their future together as Radowan was conscripted into the Syrian Army. But after that, he escaped to neighboring Jordan and became a refugee "because he could not bear the deep remorse" he felt in attacking his country's own citizens, she said.

Undeterred, Komatsu reunited with Radowan in Jordan. They held a small wedding ceremony there in 2013, celebrated by only a small number of friends in attendance.

Komatsu converted to Islam but said she never felt any resistance to the religion. "I had a strong desire to learn about the Islamic faith," she said.

But unable the find work in Jordan, the newlyweds headed for Japan in November the same year. Radowan later became a recluse, suffering mounting mental stress as he tried to adapt from his previous nomadic existence in the Syrian desert to life in Tokyo's concrete jungle.

Later, Komatsu was disowned by her Akita parents. "They associated (Radowan) with terrorists because he is Muslim," she said. But Komatsu did not give up, continuing to write to her parents to show the couple's deep resolve to share their life. Her parents' stance began to soften.

"He is a normal youth. I didn't know, so I was prejudiced," Komatsu's father later admitted.

She was pleasantly surprised at her father's change of heart. Initially bothered when Radowan would suddenly begin praying aloud while walking together on the street, the father says he now "pretends not to notice" his son-in-law's utterances.

Komatsu, meanwhile, tries to interpret what is going through her father's mind. "Instead of criticizing, he is trying to coexist by keeping an appropriate distance." Radowan also does not keep the company of her father, who enjoys the alcohol forbidden by Islam.

Since he started attending mosque services, Radowan's mental outlook has brightened. Now, he is engaged in various jobs, such as second-hand bicycle exports and a vegetable delivery service, but he continues to work in the traditional "Syrian fashion."

Radowan is not interested in earning a living, and although he and Komatsu have been blessed with two children, he never helps with raising them or does any household chores, she says. 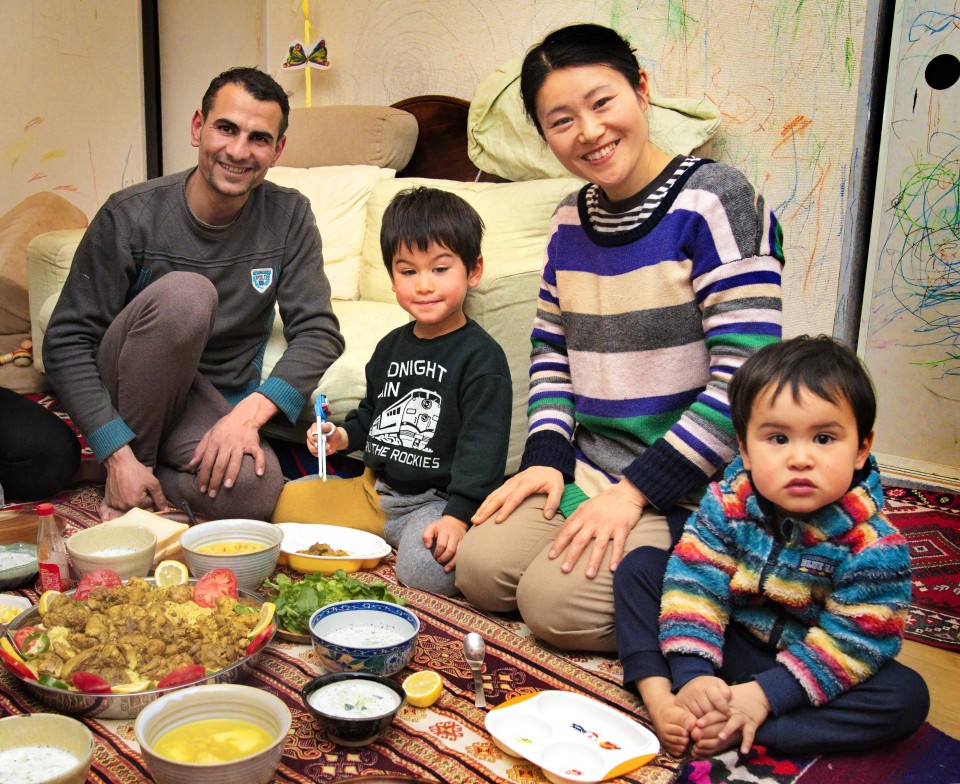 Yuka Komatsu (2nd from R), Abdallattef Radowan (L) and their two children sit down to eat a Syrian meal at their residence in Tokyo on Jan. 14, 2021. (Kyodo)

Sometimes she wants to complain to Radowan about not doing enough, but she forbears hasty judgments, trying not to impose Japanese values upon him. And she is self-deprecating to a fault, some might argue. "Syrian women are perfect at raising children and household chores. From my husband's perspective, I am a lousy wife."

Syrians approach daily activities with family and friends at a relaxed pace. Radowan has taught her nomadic values, which she cannot learn by watching movies or reading books, she says.

In September 2020, Komatsu released a book in Japanese chronicling her experiences as a photographer, from her K2 summit to encountering Radowan and the lives of the people in the Syrian desert before witnessing the civil war.

Ten years have passed since the "Arab Spring" uprisings inspired major protests in Syria. However, spring in Syria remains a distant prospect. Many of Radowan's relatives have also fled to safety in countries such as Jordan and Turkey.

But Komatsu hopes her children understand that their roots also lie in Syria. "My children have inherited Syrian blood. How will people with Syrian roots live out this turbulent era? I want to closely observe with my husband and children what happens."