The student council at Chubu Junior High School in Kanonji, Kagawa Prefecture in western Japan as part of its international contribution is engaging in activities to bring clothes that are no longer used in the students' homes and send them to developing countries.

The council, involved in such activities for the first time, took part in a project being promoted by a nonprofit organization (NPO) in Tokyo, collecting around 300 items before shipping them to their designated destination on March 19.

The activity came about after Saki Okane, 14, a second-year student council member, learned about the NPO "Yofuku Post Network Meeting," which handles the reuse of clothing, and suggested working on it at the school. 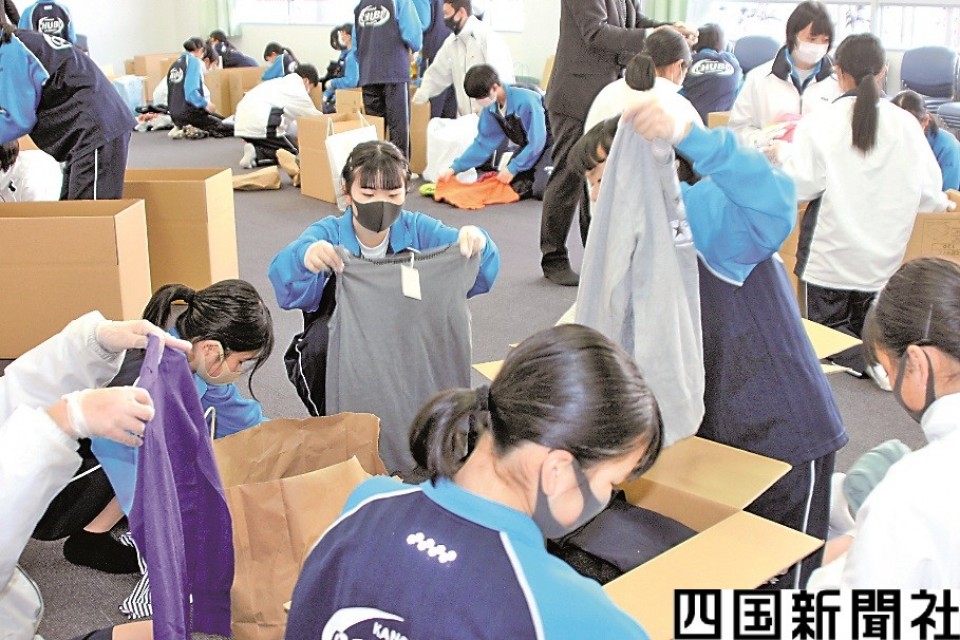 The NPO sells collected clothing at used clothes markets abroad and sends the proceeds to groups including those working in areas affected by the Great East Japan Earthquake.

Okane's proposal was chosen after the members of the council put forward activities they wanted to work on during a presentation in January.

The activities are being developed under the name of "For Someone." In February, the council called on all of the students at the school to cooperate in providing clothes they no longer wear due to reasons such as the size no longer fitting. Around 60 responded to the request.

Fifty-two volunteers in the first and second grades checked the collected shirts, sweatshirts and trousers for dirt and tears, folded them up, and packed them in 15 cardboard boxes after school hours on March 8.

"We buy lots of clothes and shoes and often throw them away when we can no longer wear them or no longer need them. I felt it was a waste," said Okane.

"Through our activities I've realized that a little of our actions can benefit someone. I'd like to continue thinking about what could be of benefit to someone and act accordingly."